Upgrade does not reflect actual speed

Upgraded my internet speed to the announced and existing M350 on the 17/11/2020, fact is that until now I have not been provided with the announced service i.e. speed. Several contacts have been made without success and without any reply, which makes me think that this is meant to happen, as by the end I have started my payments for this pseudo service already. What is the problem with Virgin? I want a clarification from Virgin whether I will receive the announced speed, as Virgin has accepted my upgrade and sent the contract, or if not possible, to put me on a service where they can guarantee the promised and contracted QOS. Also, and obviously, I want to be compensated for all the time I have been paying, without actually being provided with the service. 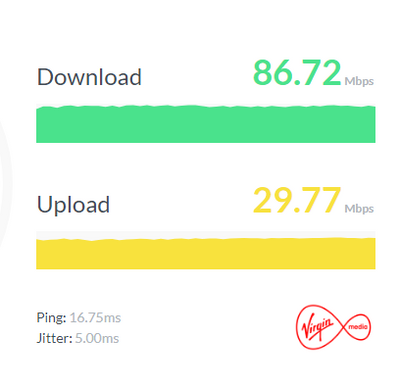 how are you testing. Wireless or wired?
0 Kudos
Reply

Both WIFI (2mts away from the router) and ethernet.

Anyway, we talking about a massive difference on what I should have and paying for, and what I'm experiencing. Its the typical bandwidth factor. Being a senior IT professional myself, don't even understand how I left me scam like this. I have trusted the brand...

An 86Mbps download speed is always suspicious to me (particularly when upload speeds are ~ what they should be),  that you are being limited to 10/100 speeds by one of a few things. Firstly, is it an old Cat5 cable you are using - or are you on Cat5e or better - and tried several of them (they can just fail)?   Also the NIC card may have dropped down from 1GB to 10/100 - can you check in the computer's settings - worth checking it's drivers are up to date too. Finally I have a list of links to >30 reasons why down speeds are being limited - so can you do it using the protocol below and see what that gets when many of those wont be relevant

Re. the wifi, - on my iPhone I only get my full 220Mbps when connecting on the 5GHz wifi band - if I flick to the 2.4GHz band, speeds drop to ~70-80Mbps - it's just the limitations in that technology. You may be connecting on that band for some reason. So can you go into the Hub settings and firstly disable "channel optimisation" and then rename the SSID's of the two bands to separate them out so that you can connect specifically to the two networks in turn to compare speeds on the both frequencies.

If you think that you have a BB speed problem, then to check the speeds coming in to your Hub properly, and whether they match what you should be getting, you cannot rely on wifi tests, - no BB supplier guarantees those - only speeds "TO" the Hub are guaranteed. BT's wifi "guarantee" is to offer some of their whole home discs which they charge you extra for and just offer money back if they dont work !

So, as you expect >100Mbps, connect a 1GB enabled computer/laptop, with up to date NIC card drivers, via a known good and working Cat5e (or better) ethernet cable, directly to the Hub which you have put into “modem mode” (see VM website for “How To”). Test at speedtest.net (not using their App!) to your nearest VM server - try on 2 different browsers.

If they are still low – boot the device into safe+networking mode and try again.

There are many posts on here where unknown/flaky software, old network card drivers, corrupted browsers or other connected devices are limiting speeds on tests.