Slower speed after upgrade from M500 to Gig1

(I'll post the status results when this page lets me, says I exceeded 20,000 characters)

I upgraded to Gig1 a few months back but have never got more than 300mbps whenever i have tested and not had the time to dig into it thoroughly until now. On the M500 package I was getting just over the 500Mbps each time I tested, even on WiFi albeit in the same room as the Hub and right next to it.

For clarity, I'm currently testing the speed on ethernet cable direct to the Hub 4 with Cat 6 cable and Speedtest is only getting 209mbps:

I have tried Samknows and on my mobile with the Speedtest App all the same, and nowhere near 1000mbps.

It looks like a few of the channels aren't working right.

I think this needs an engineer visit as this has been appalling speed and it frequently loses all service. I'm paying for a service I'm not getting. Please help.

Everything in the stats look fine.  You need to setup a BQM to see the status of your incoming circuit  www.thinkbroadband.com/ping

What speed is Real Speed (SamKnows) showing to the Hub?

I set up the monitor as suggested. Here is a couple of hours of results: 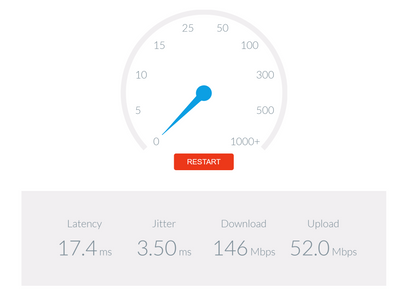 Interestingly I went through Speedtest results and found on the day of install I got 945Mbps but the very next day it dropped to 321Mbps and has been around 200Mbps since:

Reposted as first attempted was blocked.

Hi KoiKeeperDaz, thanks for the message and sorry to hear that you are having issues with the service. Can you confirm what has been advised by the engineer and are you still having issues since posting? ^Chris.

Hi I am having similar issues myself, I had an engineer out today who checked with one of his colleagues and there is a known issue which is still being investigated related to the Hub4 and 1Gig connections at least in the Northwest/Liverpool area, as it is still very early days the CS teams do not know anything about it. But the engineers I spoke to today are going to chase it up with the network team to see if they are any closer to the bottom of the issue. are you in the northwest?

I have had 2 visits now, the first visit we tried replacing the Hub 4 but that made no difference. The second visit we also tried a Hub 5, initially there seemed no major difference. Although after several hours and several reboots of the Hub speeds are improving although still nowhere near the 1000Mbps. I have managed 700Mbps on WiFi 6 now but LAN is less than 200Mbps sometimes only 50Mbps.

The original issue still seems to be that WiFi is ok and LAN speed is slow, typically 100-200Mbps. Despite CAT7 cables (new) going direct to the Hub with 2 different modern laptops with 1Gbps connections (checked that it has negotiated the full 1000/1000Mbps speed). Even turned off Firewalls, no VPN running etc, although these laptops both get good WiFi speeds as mentioned. I have set up JPerf on 2 laptops both connected either through the Hub or via my managed switch and I get the full 1Gbps between them. It's just between WAN and LAN it gets throttled.

We tried the Hub in Modem Mode with my Ubiquiti Mesh router attached to it and the speed tests were the same,

What is fundamental is the original Hub 4 worked the day I set it up and I got 945Mbps that day, but the very next it dropped to 300Mbps and has been down at that level ever since, I didn't change anything in my set up. Not that should be an issue as we have tested with everything disconnected from the Hub except a cable to a laptop to the test it. It makes no difference.

The Hub 5 GUI is very buggy with frequent timeouts and server 500 errors. Tried on several devices, PC, iPad and phones, in different browsers too. If I reboot it sometimes it doesn't come up at all and reboots continually so needs to be powered off for a while. I observed hundreds of Post RS Errors across all the channels last night so rebooted. Checked again just now and it has errors again although not so many. Is this a line issue too, I don't want to confuse this with the LAN speed issue.

Has traffic shaping been applied to the Hub now since there is an anomaly in the testing where I can get 400Mbps on a WiFi 5 connection through my mesh router that is on the LAN? This suggests the LAN speed is better than I thought but traffic is being treated differently that comes from the Mesh Router. I don't have a WiFi 6 Access point to try on the LAN yet to test further. I thought putting the Hub in Modem Mode would rule out Traffic Shaping as full speed should be delivered to the Mesh Router but oddly it didn't.

I think the issue is not resolved at all. I had a better speed on M500 where all the devices got that speed whenever I tested. So not sure I agree with the engineer saying that no device will get the full speed, sounds like traffic shaping to me. I have a lot of devices but most of them have very little bandwidth/throughput requirements. We don't have loads of people streaming or gaming at the same time. I just want the speed occasionally when downloading on Sky Q and updating games on the PS5.

I know I was lucky to get the Hub 5 but it doesn't work well although having WiFi 6 is a bonus, I only use this in one room where the Hub is. I think I need another visit and another Hub 5 or it needs an update. Initially the GUI worked fine but now it's unusable, I can't get to any settings without a Server 500 error.

Not very happy I have to say as I have spent hours on this and paying extra for a service I'm not actually getting. The last engineer ran out of time and had no ideas so no plan on the next steps.

Hi, no actually I'm in The South East. It still happens on a Hub 5 too. I have replied to Chris so you may want to look at that post with some of what we've tried.

Hopefully I'll get somewhere soon as it's very frustrating. On M500 I had no speed issues at all. I had nearly the full Gig1 for one day when it first set up, and never since... I suspect a software update to the Hub and traffic shaping going on, but could be wrong.

Thank you for reaching back out to us and for the update, I have had a look at things our end and can see you have recently had a Technician Visit and this is being monitored our end.