Slow wi-fi on Xbox One

I just had my broadband installed today, everything works fine on every device apart from my Xbox One. On my phone downstairs I get 150mbps - 180mbps while on Xbox I now get 6mbps (it used to be 20mbps but now sometimes it's as low as 2mbps). Does anyone know a potential fix?

So far I have done a factory reset, but no joy. I have never had such problems with BT.

I also called Virgin Media support, they said they can't guarantee any sort of wi-fi speed. What? Then they transferred me to the Gadgets department who offered to "optimise" my xbox xbox fully, whatever that means, for £5 a month. What is going on?

This is disgusting customer service as they didn't even try to fix the issue.

If your getting 180 on your smartphone then virgin are giving you what your paying for.  It's not disgusting service as virgin are there to provide you broadband to your hub, not to provide support for 3rd party devices

Is your xbox far away from the hub?

What method of test are you doing for speedtests?

Was bt router in same location as your virgin hub?

It’s true they don’t guarantee WiFi speeds - check your contract and terms of use.

And the fix? Run a wired connection instead.

I understand that, the lack of care was just shocking. And I'm sorry, but "we'll optimise your Xbox" sounds like a scam. And why is it a monthly service just to keep the wifi at acceptable levels? They were so confident, it kind of sounded like they knew exactly what was wrong but wouldn't tell me unless I paid.

The xbox is the same distance it was to the BT router and the Virgin hub is about a meter away from the old BT hub so I don't think that's the issue.

I was getting 50mbps with BT to every single device including the Xbox. Clearly there is some issue with the network, maybe a port or a setting or something.

For speed test I use Ookla, fast.com and for xbox I use their own test from the settings (and also those two mentioned there from a browser on the console).

I understand Virgin might not provide support for 3rd party services but they didn't even try to figure out if it could be something wrong with their service.

I will try that next.

For anything like that the CS reps scripts say... "its the user's problem so Refer to Gadget Rescue".

But you are right not to use it - you will get better help here.

My lad is an avid internet gamer who thinks wifi is the work of Satan. He was running long ethernet cables up to his room but now has a pair of powerline adapters so that his PC/Xbox/PS3 can be "wired" with short Cat6 cables to the router and hasn't complained in years. Worth considering whether that will work for your house - you can also run the wifi boosters alongside. They wont give full speeds but he gets ~80mbps on our 200 service. They need to be on the same electrical circuits or go through the same consumer unit though.

To be honest, I don't think I'm gonna bother, I shouldn't have to buy cables considering the lounge is too far away from the hub for a cable and it will probably be very expensive. Even if it's not, this is something that should work out of the box.

Sounds like the hub is too far away to the xbox for a really fast connection.  Its a common problem that's why there are so many options on amazon etc to fix

Your Xbox One may be connecting on the 2.4Ghz network.

You can check this by logging into your router, and navigating to the 'Connected Devices' tab: 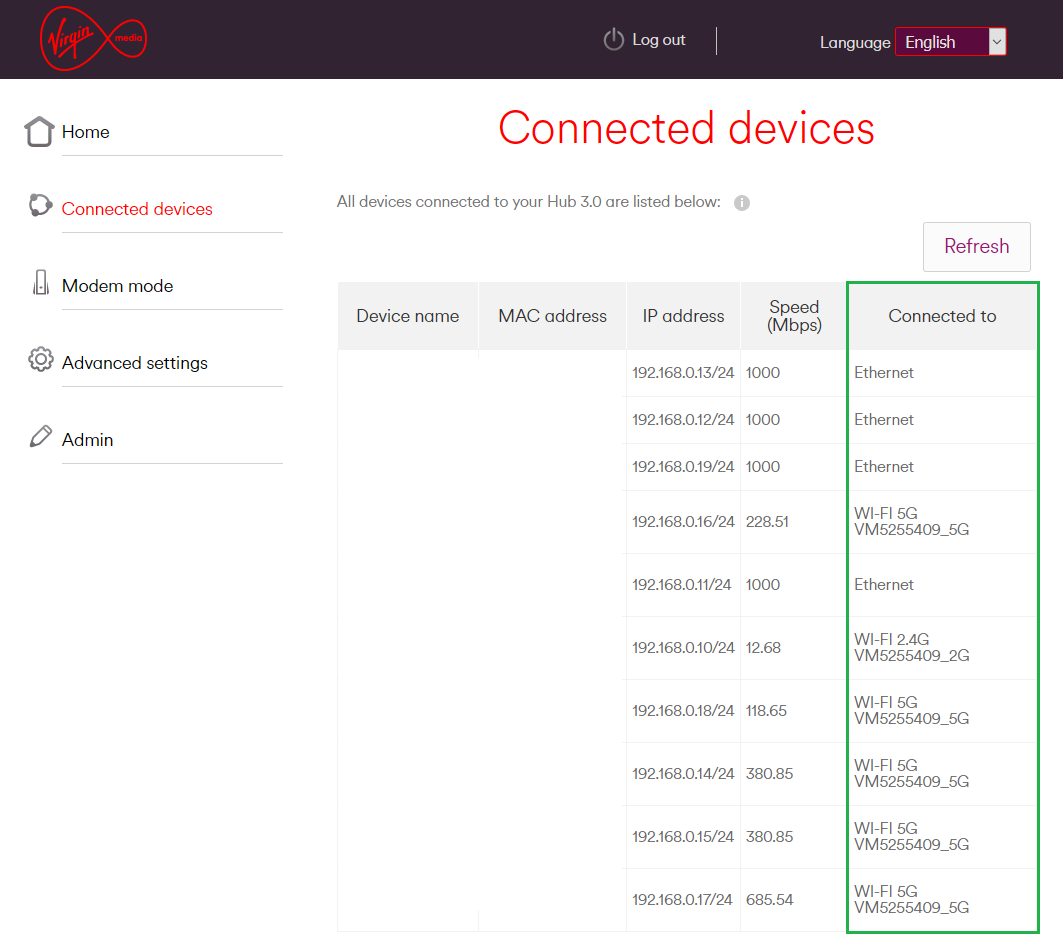 I've split my 2.4 and 5Ghz networks into two SSIDs so I know for a fact which band my devices are connecting to, to ensure best speed possible.