A month or so back, I upgraded (was offered a deal, otherwise I wouldnt have as I was very happy with that service) from the 200mb service (where every speed test I ever did showed at least 150mb, most days I was hitting the 200mb+ speeds) to the Gig1 package.

According to Samknows\realspeed, the speed to the router had been bouncing between 200 - 700, generally averaging below 500.  I posted on here and a mod arranged an engineer.  The engineer came out, said there was dirt on the fibre optic line on the docsis 3.1 side, cleaned it and replaced a fibre cable at the box to my house.  After he left, it was still bouncing around, he came back and swapped the router.

Since the hub swap, realspeed tests show a gig to the router consistently, but I'm getting nowhere near that on any device.

The engineer also patronisingly told me that "People get the gig service and expect gigabit speeds, it's more about bandwidth than it is about speed."  I get the additional bandwidth explanation, but have seen people on this package get speed tests showing 700+, I've also seen people with the same problem that I have speeds peaking around 300 - 400, but mostly under 100.  I don't expect to get slower speeds to my devices at all.

Today for example, speed tests to a wired gig capable laptop show 50mb.   Some days I get up to 400 odd mbps, I've never gone higher than 500.

Prior to this I was getting the full speed to my devices that my package was supposed to provide.  Those same devices that were reporting 200+ are now reporting 50mb, 150mb, 10 mb..... I have a smart TV using a cat 6 ethernet cable that on my previous package and superhub 3 never had any problems, now, I find it buffering Netflix, Disney+ or Prime Video a lot.

I'm at a loss as to what to do.  I haven't yet put this router in modem mode and disconnected everything to do a proper speed test, I will do and if it shows the same poor speeds, I might log a ticket, but then I will just get the usual "Well, you're getting 1000 to the router so it must be your device can only handle 10mb".

As I stated, on my previous m200 package, I was consistently getting 200, that was even using Ethernet over power adapters, which i have since removed as they were getting pitiful speeds.

I really regret upgrading to this package, but I'm past the 14 day cooling off period.

Just to identify where the problem is, what speeds do you get with a laptop or similar connected directly to the Hub by ethernet, with no other connections?

I'll stick it in Modem mode and test it later and update the post.

@thelatman77  I really regret upgrading to this package, but I'm past the 14 day cooling off period.

See if the forum staff can get a senior technician assigned; If that doesn't work then initiate a complaint under the minimum speed guarantee.  Read the detail, but in essence you need at least one sub-565 Mbps speed result on each of any three consecutive days.  VM then have thirty days to either fix the speed issue or release you from contract without penalty, and I'm sure they'd be willing to agree a downgrade back to 200 Mbps if that were a preferable option for you to cancelling outright.

Yeah, but the problem is that according to samknows\realspeed, it is getting above the minimum to the actual router, it's the router onwards that is not behaving.  So Virgin could well just shrug and wash their hands of it.

They might try and wash their hands, but if they do that you escalate to the industry arbitration scheme CISAS as soon as the rules allow.  That will cost VM a packet, and chances are they'll lose.  There's perhaps acceptable limitations on the Hub 4 (1 Gbps ports and the 802.11ac wifi), but they still need to demonstrate that you can get at least the minimum speed out.

Thanks for the advice, I will test Modem mode later (when kids aren't using it) & get some screenshots of the results from the site they recommend using..
0 Kudos
Reply

OK, put the router in Modem mode and made 3 speed tests from Speedtest.net (Samknows.com\realspeed cant detect router when its in Modem mode apparently):

I've also uploaded a capture of the welcome page, interestingly, it did not detect my laptop was connected via ethernet.  The laptop has a gigabit NIC. 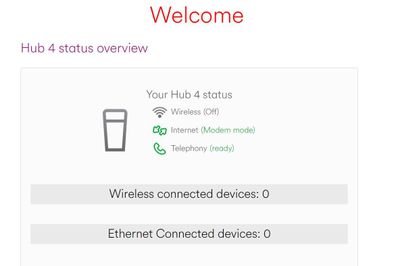 Didn't detect my laptop with gigabit capable NIC as being detected. 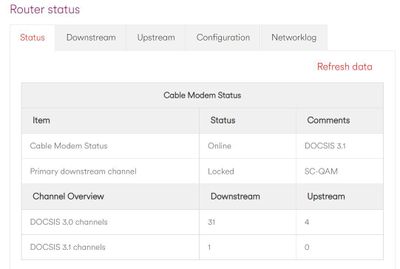 The upload speed seems fine, but I'm not even getting 100mb on the download.

This is the Wifi speed after returning from Modem mode from Samknows:

An improvement, which is crazy as ethernet & modem mode should give me as close to max speed as possible,  but I'm NOT getting anywhere near gigabit speeds to my devices.

This is the WLAN adapter on my laptop: Intel Dual band AC 8265.html  (not expecting gig speeds on Wifi)

Something is limiting your PC- Hub connection to 100Mb instead of 1000Mb.  Ethernet cable or NIC ?

The NIC on my laptop is gb capable, I was using a good cat5e cable, I'll dig up a 6 and try that again.