I was hoping one of the forum team can help me out with this issue as it's been present for just under a week now. I'm going to preface this by saying that I'm not the bill payer, though I'm in charge of admin-ing the internet at home (plus the bill payer is my father lol).

Basically, at the moment, we only seem to be getting 90Mbps download, which is actually the best speed we've managed and we tend to average ~75Mbps. Upload speeds are completely unaffected for what we're expecting (they stay between ~36Mbps, going up to ~40Mbps if we're lucky!). We use the Hub 3 we've got in Modem mode so we can use two Asus RT-AX92Us in a mesh setup with an ethernet backhaul, seeing as the Hub 3 was only really good for the ground floor of our house, and even then it was a bit patchy. The first RT-AX92U sits right next to the Hub 3 and uses a very short RJ45 cable to connect the two, with the second one in the room at the opposite corner of the house upstairs.

I'm pretty sure the issue isn't the result of the Asus units being used, mainly because:

My guess is that something has happened to our line that has cut our download speeds down severely, though I wanted to ensure that none of the hardware at home was faulty before asking for help!

If anyone can assist with this issue it'll be much appreciated, especially as we have quite a few computer users working from home at the mo.

Sure thing. Here they are:
Downstream:

Had to split it into two messages as I exceeded the character limit - oops! Here's the network log bit:

Copy and paste only the speeds and devices part, not any personal information eg 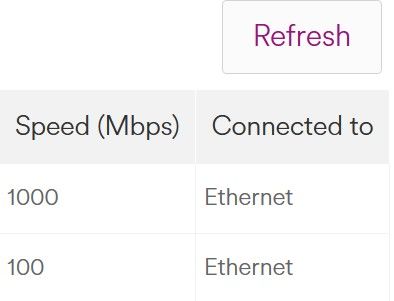 This tells us the speed you are connected to your Hub

I wasn't able to find the specific info you mentioned, which maybe because I'm running the Hub in Modem mode and those options are only available in Router mode - I haven't changed it from Modem mode yet as we've got people needing to work from home. If the 'Connected devices' page shows the capable speeds of the connection (like 100Mbps or 1Gbps like you showed), I know that all the cabling and network switches in the house are capable of 1Gbps, including the short run from the Hub 3 to the main Asus unit that sits right next to it. We've achieved (and sometimes slightly exceeded) the advertised 500Mbps over both Wi-Fi and ethernet before with exactly the same network setup, which is what led me to believe it's an issue with the service rather than the hardware and software configuration I've got. Just to ensure there wasn't any other bottleneck on the network, I plugged my laptop (2017 MacBook Pro 15", so it's no slouch when it comes to networking) directly into the main Asus unit, and I achieved ~93.5Mbps down, ~36.7Mbps up.

I've pasted the Configuration tab below as it may be useful.

I'll have a go at reverting the router back to factory defaults tonight (i.e. back to Router mode), do the same direct connection test and report back my findings. I'll leave any configuration I've got on the Asus units as it is for now.

When the Gigabit card is set up it is set to auto-negotiate, so if by reason of weak signal or noise from other Wi-fi users, or equipment like refrigerators or electrical interference of various sorts, the connection auto negotiates to the speed it can handle which usually means it slows down to allow the best connection, so even if you have a Gigabit connection set up, for Wi-fi you would need to determine what connection the Hub adjusts to. Hence the Hub connection speed.

Try your connection straight to the Hub in router mode with other equipment removed so as to determine if there is a fault at the main link in the chain. If that is Ok then you can look elsewhere for other possible causes/faults.  Your stats look OK so cable to the Node looks OK

I went ahead and set the Hub 3 to Router mode to check out what was happening. I did this via a complete factory reset of the Hub 3, by the way. With a direct connection to the router via ethernet, I managed to achieve the advertised speeds and then some (a blisteringly fast 548Mbps down, 36.9Mbps up no less!).

With this knowledge I started to think that there was a potential issue/bottleneck on the network causing the slow-down, so I set the Hub 3 back to Modem mode, and to my surprise the speed issue was fixed! I’m getting exactly the same speeds in both modes on the Hub 3, so thankfully it wasn’t anything on my local network causing the issue.

Bit of a strange solution to the issue, but a solution nonetheless. Thanks for all the help getting things sorted, though, guys! Much appreciated. 🙂

Actually, nope. It seemed to have fixed the issue temporarily, and has now gone back to the same slow speeds again. I’ve now gone through a complete factory reset of all devices involved (so that’s both the Hub 3 and the two Asus units now), and I’m really at a loss as to what the issue could be...

Ohh - we got excited when we saw your post from Wednesday; sorry that it didn't hold true and the slow speed issue has returned.

I've managed to locate your account from your forum information to see if we could see anything this end. I can see it's been almost 4 days since the Hub was rebooted; was this when you did the PIN hole reset? Any joy after that and your last post?

We currently have no known area issues listed for your region, no errors are showing and all signal levels are where they should be for your broadband package. As you are currently in modem mode, I can't do any checks on the devices or connections though - sorry.

It is odd how you have had the promised speeds in the past and now it's dropped without any changes - there is nothing at this end that should be impacting your speed at the moment.

We're you able to test a wired connection direct to the Hub in router mode last week at all? What sort of numbers were you getting?