Post upgrade to 1GB, internet is slower than the 200MB I left...

I upgraded to the 1gb package earlier in the year and am very disappointed with the results. It's now slower (~160Mbps) than the 200MB package that I left (that I routinely tested at ~180Mbps).

I have a Hub 4 in modem mode, with Linksys Velop throughout the house and a series of connected machines on a 1gb network switch. All my speed tests have been from a machine that's cabled, I'm utterly unconcerned about the wifi tbh.

My speedtests were initially OK - I got 875Mbps at one point in April a few days after upgrading (that's the fastest I've ever recorded) but my fastest speed in June was only 179Mbps, July is looking the same.

I appreciate that there's a bit of an info dump up there but I'm hoping that someone with a bit of engineering knowledge or similar might spot an issue - or, confirm that there isn't one so advise what else to check? I'm convinced it's Virgin's side, all my equipment is brand new (converted a room to a home office during lockdown) and there's evidence that it DID work at rapid speeds once, without anything changing. Things have just got worse each week to the point that I'm now fed up.

Am also happy to share speedtests, my broadband quality monitor and anything else if it helps in getting me towards the speed I'm paying for.
0 Kudos
Reply

Most of the hubs data look normal.

However the only thing that stands out is that your upstream powerlevels are near or at max.

Thats the first thing I think needs attention and adjustment.

Also, just to rule everything else out; connect just ethernet device to the hub, reboot the hub and try the samknows real speed test.

That will let us know 1. It's not your equipment/cables

2. the hub is actually capable of achieving the 1gig speed.

I've taken the hub out of modem mode - back into router mode as is requested for the SamKnows test - and attempted to get a result on there; I can't, am continually met with the "Your SamKnows enabled device is offline" message: 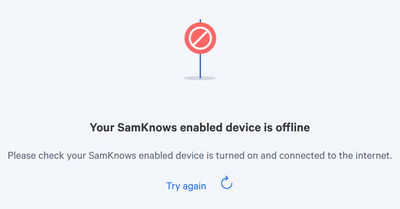 However, whilst in router mode I've attempted the "old" speedtest - the one that doesn't test the hub like realspeed does - and that's showing slightly better results than recently: 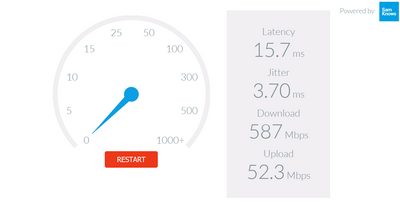 Am going to slap it back into modem mode and see if this slight improvement remains. I know the kit can do the full speed in modem mode as things were fine on exactly the same hardware after install in April:

Shall report back when back to modem mode etc.

OK, another reboot later and I'm back on my own hardware, hub is in modem mode etc.

Just had a speedtest report a download speed of 599.64Mbps, so something has improved. Perhaps the hub just needed a reboot? Nonetheless, I'm still not convinced that it's as fast as it could be - can I do anything else, re: power levels etc?
0 Kudos
Reply

Well speed wise you should be getting 940mb via an ethernet device, so yes it should be faster.

After the reboots has any of the hubs data changed?

Aside from virgin sending out an engineer the only thing that YOU can try is a pin hole reset..

Just hold down the tiny button recessed at the hack of the hub for 30 seconds or so.

It will completely remove all settings so you'll have to get it back into modem mode etc.

Hi @ckempo thanks for posting and welcome to our community.

I am sorry to hear you're having slow and inconsistent download speeds.  I have had a look from this side and cannot find any issues as to why this is happening.  I have located your account and am going to send the information to a field based manager to see if we can do an investigation.

@Lee_R - thanks, I really appreciated this - the engineer was on my doorstep the very next day!

So here's what we found:

When I downgraded my TV package and lost a box from upstairs, that should have been a visit from an engineer to change my 1-in-3-out splitter to a 1-in-2-out one, but that never happened (was just told to unplug and return the box and that was that). As things were, I had the signal split to a box upstairs that was no longer there - it was likened to a leaky tap, where pressure (or signal) is being lost in the system because it's not capped off. So that was changed.

Then there was some fiddling in the cabinet outside due to my upstream power level not being quite right. I suspect that this is what @risc19 was concerned about.

Finally - it was established my Hub 4 wasn't responding as expected, so that was changed for a new one.

Would like to recognise James (the engineer) for his efforts, if that can be passed on in some way.

As of now, I'm achieving ~630Mbps to my hub. Honestly, it's better but I'm still convinced that it isn't fast enough, all things considered - remember, the first week after install I hit the best ever recorded speed of 875Mbps, so I know that the existing infrastructure can deliver better than at present.