these seem as if the link is on its last leg.. 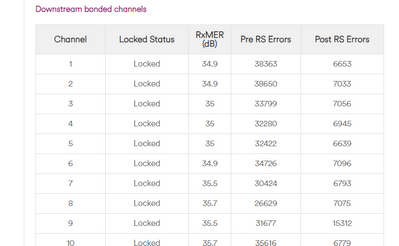 Switch the Hub off and unplug it for a few minutes and then start up. When done, check back in the settings and ensure that the RS error counts have all reset to 0.

Then check every hour or two to see if they start reappearing - they shouldn't. If they do (particularly the postRS ones) you have a problem (noise) that only a Tech visit will sort.

done the obvious "pull plug out and re set"

So was out this mornign, and hub "died".

kids did the normal power out , power in again,

still dead when I got home, as virgin support would not talk to the wife......  unless she knew the password ( which I dont know either ... )

So had long chat with support,

they did some things, ended up with me having internet ( direct cable connecting to hub ) , but coudl not access the hub control panel to see the RS status etc.

They did a few more things, then got us to do another rest,

now have hub connected, no post RS errors and very few ( 20 or so ) pre RS errors,

but can't help but think hub is on way out ..

in these days of us all working from home, having a reliable hub is ore important than ever..

wonder if I can get a replacement before this one dies completely ?

hopefully a admin will see this .

It might not be the hub - It may be your connection from the CMTS to the Hub.

Its possibly the cmts, yes

but the IP address handed out is fine, and others nearer to the box dont seem to have the problem, just us who are by far and away the furthest from the green box, so as you say it could be the connection again, we had to have the cable replaced about 10 years ago, so may be,

just now ( just before the football started ) , the "super hub" re booted all by itself

Now back up, and  when I log into the hub,

the phone people are script warriors,

abs no use, they were telling my wife earlier to re start her phone, as she was talking to them on the phone,

When I called late, the script warrior was lovely, then when I started to talk about Post RS errors, all they wanted to do was reset my hub ( again )

and why is it , that every time the hub is re booted, it turns its wifi on again, yet it can remember all the other settings !

I dont want the VM wifi thank you, why can't it remember this !

when I called 150 for support just now,

we got throught the touch pad maze, then were warned as usual that delay were longer then they expected,

and then after a few rounds of nice music, the phone was hung up !

So had 85 minutes on the phone this time,

was passed around departments, at one point put through o gadget support team , who wanted to charge us to fix the virgin media hub / line, and I had to agree to this before they would talk any more to us !

Luckily the lass understood in the end that I had a laptop and a hub connected over a cable,

and there was not much that she could do , no I did not want my PC "cleaned" nor the anti virus updated to a recommended one, and the speed was fine, it was the hub resets that are the issue.

got through to some one that suggested an engineer was needed to come out, Monday next week !!

lets hope we can manage with the hub restarting as we are working from home, and more important I have two teenage kids !!!!!

It has also been "suggested" that I did not "play" with the hub settings, like turn off the virgin wifi, or change the default IP address served by the DHCP !

and if that fixed it , we were happy  , if it did not fix it, then the engineer can pick it up on Monday when they come to fix it ..

but seems there is a shortage of hubs, global things and CV19 apparently.

And we thought NTL World was bad,,,,

seriously considering a mobile router as a backup / main connection  !

Thanks for coming back to us @andrewmm with the update on your services.

I'm sorry that you had to be on the phone for so long and to many different departments. I have double checked your account and we cannot send out anybody any earlier than the appointment that you have at the moment.

If any earlier appointment becomes available, the team will get in touch via text message.

Thank you for looking for an earlier appointment,

yes, the phone support experience was very very straining, and being put through to a "support" service that anted to charge us was disgraceful

imagine if I had not been so insistent that I only had the laptop and the modem, and a wire between, and it was the hub that was resetting ,

the young lady was very very happy to start charging us.

If I had been away and it had been my wife, then we would with current experience of virgin support , we'd have eneded up with a very large bill , for virgin gear that's at fault.