Poor Upload speeds in Royston-I am sick of this!

I am totally sick of the very poor upload speeds in Royston and I am planning to give up and switch suppliers unless something is done about this. On my PC which is on a wired LAN connection straight in to the Router, even though I pay for a 200mbs download which from Virgin's data suggests I should expect a 20mbs upload, I never receive this upload speed-its generally only 3 or 4 mbs upload. Now I rely on Zoom, as does my wife, 3 or 4 mbs as an upload speed, is totally uselss. Other users in Royston have previously been told there is a technical fault in Royston which can't be fixed for the foreseeable future!!!!!

Having spent hours on the phone to Virgin technicians over the past year, having waited on the phone for hours for someone to answer the phone, having spent 4 hours waiting for someone to reply to my online chat, I issued a formal complaint to Virgin (C-1501212435). Guess what, 3 weeks later, that hasn't been replied to either. Virgin, you either need to significantly reduce my Bill, fix my problem or I am off. I have been measuring my speeds since 31st Dec (photo of excerpt of spreadsheet attached) 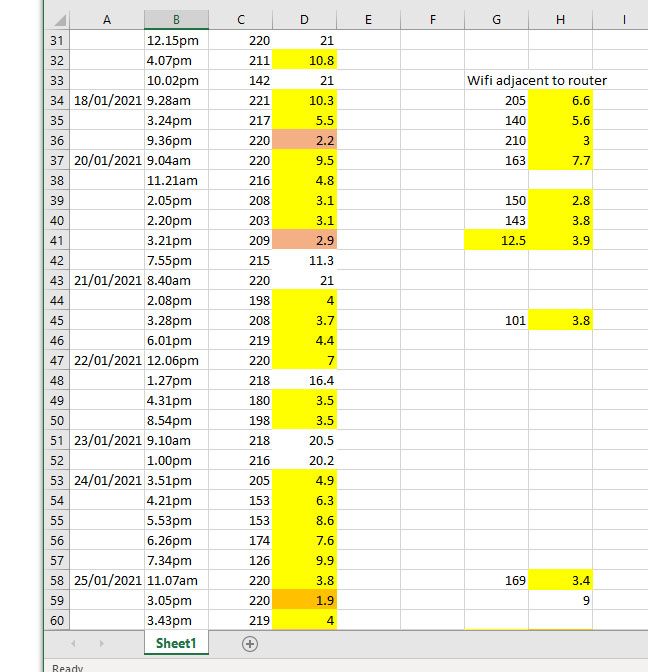 - remember, these are speeds on a wired connection-my WiFi speeds are even worse! Sort it Virgin!

Re: Poor Upload speeds in Royston-I am sick of this!

Chances are this is over-utilisation, where VM's network around you can't support all the home working and home schooling.  If that's the cause, then VM aren't going to invest to fix a problem they hope will go away when we get back to some form or normality, and the best hope for a solution is the end of lockdown.  You can check for over-utilisation if you setup a BQM over at https://www.thinkbroadband.com/broadband/monitoring/quality that'll show what's going on with your VM connection.  Post a link to a live, shared graph here and we'll see what's happening.  Usually needs to run for 24 hours before we can draw reasonable conclusions, but the live graph will continuously update so you can do that immediately.

If it does turn out to be over-utilisation, your options are to sit it out and hope lockdown ends and that the problem disappears.  Or you can switch ISP to an Openreach connection (checking to see how long this would take to connect, whether speeds would be acceptable, and if you're tied into a fixed term VM contract with exit penalties).