My smartphone in the same location gets speed of 18 Mpbs.

Standing next to the Superhub, my smartphone gets 112 Mpbs with a message that the maximum speed of the WiFi connection is 120 Mbps because of a limit caused by a router or mobile device (presumably my phone).

I see that the minimum guaranteed speed for the 350 package is 181 Mbps.  So I'm thinking I should get on the phone to Virgin and get them to switch me to a cheaper package that matches the speeds I'm actually getting.  However if I could fix it and get faster speeds, that would be ideal.

I noticed that the white plastic casing had been knocked off the silver anti power-surge device that connects the cable that comes in from the street, to the cable that goes into the Superhub.   I wonder if that could have anything to do with the low speeds I'm getting.   Though apart from the plastic having come off, nothing looks damaged and the connections are still tight.    Still - could that be related?

Also, here are some figures:

The minimum speeds are not advertised for wireless but to the hub, the only way to test the connection is wired to the hub with a Cat 5e or above Ethernet cable. Wireless connections are very much prone to inference from many source including other wireless routers close by, handsfree mobile phone, layout of house (old iron rich bricks will block signal more than stud walls).

Have a look at https://community.virginmedia.com/t5/Digital-life/WiFi-Wins/ba-p/3958523 for further wireless troubleshooting.

Thank you for your reply, Mike.

I've read patchy reviews of mesh systems like produced by TPLink, BT, and Google.   It seems the technology for very fast whole-house broadband just isn't there yet.

So my inclination is that there just isn't any point in paying for 350 when I am only ever going to be using WiFi and I'm never going to be able to get those speeds.   So a phonecall with Virgin about shifting back to a cheaper package seems in order.

I'd love to be wrong, but this is my reading of the situation.

Sounds like a WiFi issue, I have the 350mbps and my router is in the lounge and office is on the 3rd floor, I bought a Wifi 6 AX router and PCI-e card for my desktop and get 350+mbps in the office through WiFi now. I would suggest looking at a standard AX router maybe and if still slow a PCI-e card with external antenna. I invested in a more expensive router since I spend a lot of time gaming, previously i tried a netgear mesh solution and it was terrible very bag lag spikes every few seconds. I bought a ASUS ROG Rapture GT-AX11000, but you can pickup netgears for much cheaper.

" It seems the technology for very fast whole-house broadband just isn't there yet."
and it never will be if you use wireless.
If you use wireless you are sharing it with everyone in the area. Its physics and can't be changed.
The faster the tech gets the more traffic inthe air. and ther eis only so much to go around.

Thanks guys for your replies!

I've tried moving the computer to a different (and really unideal) position in the lounge.   Now I'm getting 100 to 120 Mpbs.

This is the PCIe WiFi card that I just bought and installed last week.   Should I have bought something else?:  https://www.amazon.co.uk/gp/product/B07Z1W8Y16

I've not tried going down the route of getting a 3rd-party router but I see that would be the next thing to try, if I feel the speed matters more than the package price.

You need to keep in mind it doesn't matter if you spend £100's on a fancy wireless card for your PC, if the router/HUB is not as capable.

Thanks, Carl!  We're already in uncharted territory for my level of technical know-how here.  So, a WiFi 6 router looks like something I should get.   I'm about to get a Smart TV for the first time, and also thinking I'd like to start online gaming, so something to up the speed would be a good idea in the long term.

Is there one router or mesh, etc, that's generally recommended?   I see a lot of options on Amazon and all of them have bad reviews as well as good.   Prices anywhere from £100 and up.

One thing to try is to split your SSID (Network name) you connect to into two, one for each 'band' (2.4Ghz or 5Ghz) so you can force your device to connect at the faster speed. Currently the HUB decides which is not always correct.

Like I have done with my router below, you can append the existing SSID with '_2G' and '_5G': 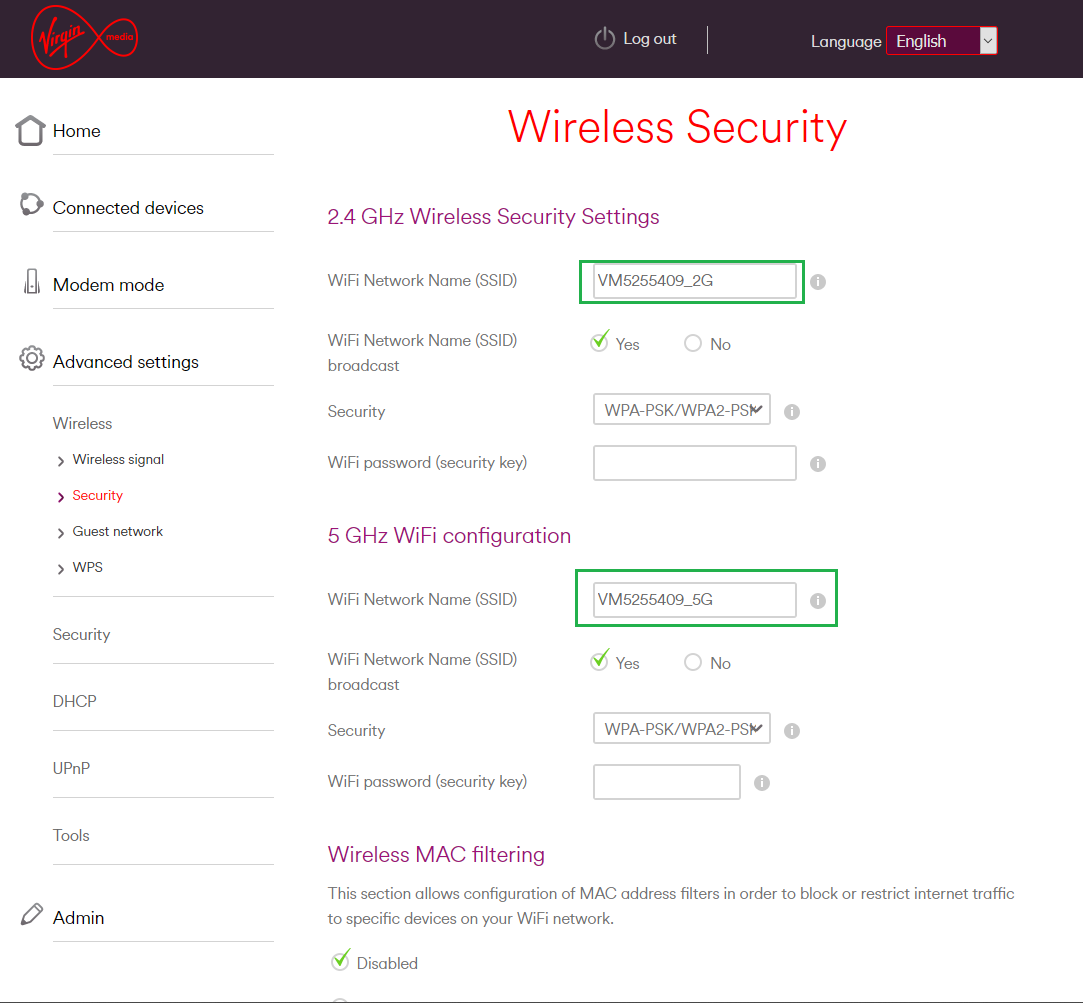 Note that once you 'Apply Changes' at the bottom you MUST reconnect all wireless devices since the name will change. If your device can 'see' the '_5G' SSID use that, else revert to '_2G' (Some devices don't work on 5Ghz).

Regarding third party Routers/Mesh devices it's a bit of a minefield to be honest and not something I've had to do myself.

Either would be better than the HUB 3!

I would suggest that you get a WiFi mesh system from what it sounds like you have a big facility i personally would run some fibre optic cable outside and upstairs then get an access point like the one I have as its basic and POE it means that its minimal cost as its cheaper to run fibre optic than coper ethernet for long distances. its easy to do aswell fibre optic cable cannot be struck by lighting which means your house wont all be fried when you get struck.