I've just about given up all hope... contacted Virgin Customer Support numerous times, gone through the usual nonsense about rebooting the router / factory reset ets. etc. but all surprise, surprise to no avail! I am and have been paying for the 350Mb service but as will be seen from the speed test results graph below over the past yeat plus, I get nowhere near, in fact about 10% is the average download and ironically, I often have a better upload than download. Something really needs to be done about the disasterous Virgin Media service... 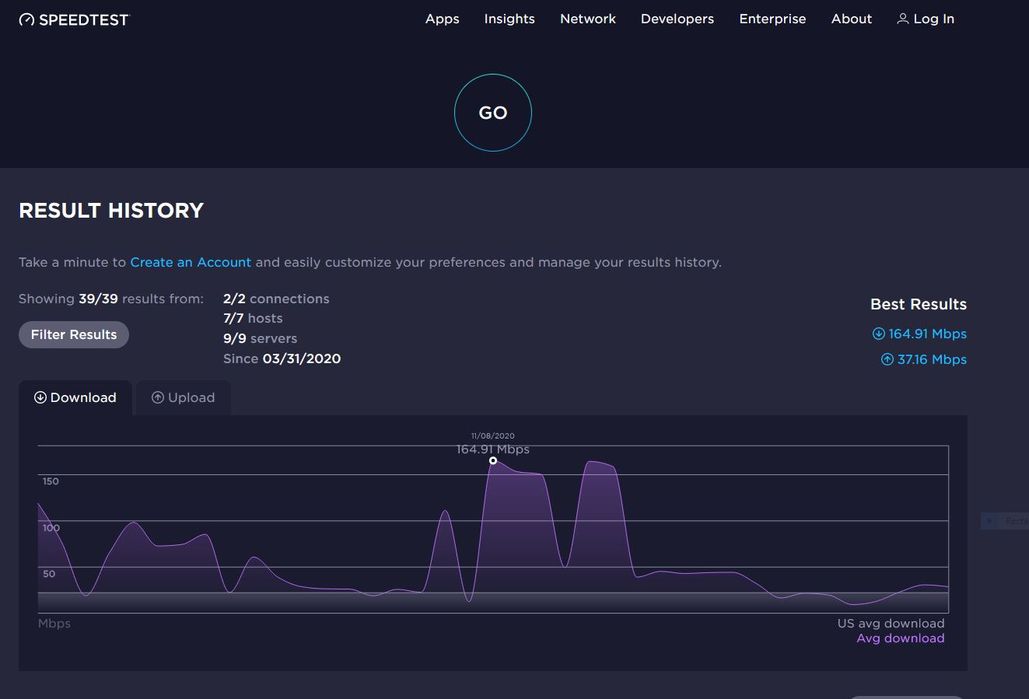 Are you testing wired or wireless?

What speed do you get on https://speedtest.samknows.com/ with direct wired connection from PC/Laptop to router using a Cat 5e cable or better with a 1Gbps capable Ethernet network card?

Thanks for your reply and advice. Much appreciated but I would ask that you review the speedtest graph! You will note that there are vastly changing peaks and troughs which indicate instability at the supply source, not my equipment! Even using my mobile phone at one metre from the router, my speed test results remain consistant with those of the graph. I appreciate that a Cat6 or better hardwire connection may be superior but unfortunately, we now live in the 21st Century where WiFi is the norm and thus should be the promoted rate, not the quality of the cable or NIC connected equipment!

Unfortunately Virgin do not guarantee wireless speeds and I asked you to use a different testing site as speedtest.net can be very hit and miss, especially lately, but as for your graph showing ups and downs, yes there are going to be different peaks as it's wireless with many variables after all and depends on distance, thickness of walls and other wireless signals around you. The Virgin Hubs are not very good with wireless capabilities and to be honest if you want a better speed and coverage you'd be better off with a decent third party router, preferably a wifi 6 router so it's future proof. Another reason I asked for you test via cable was to make sure you are getting the correct speed to the hub before moving forward to wireless problems 🙂

I've just had a look into the hubs signal levels and details etc and everything seems to be fine on our end - I'd suggest you plug whatever devices you can in via Ethernet cable to receive the best connection possible, and also to take a look at our help link here to improve your WiFi performance https://virg.in/wifisos

My apologies for the inconvenience, @makoshark.

Let us know how you get on with the help link.

Thank you all for your help in this matter.

As suggested, I have connected my MS Surface laptop via a USB3 adapter to the router by way of a CAT6 cable and tried both Okla and SamKnows spped tests at various times.

3 interesting facts, the first being that the difference between the two speed test facilitators was less than 10% on all tests.

and finally the third... on all tests attempted, the maximum download was less than 90Mb

So as a final proving trial to ensure it is not my equipment, I took my laptop etc to my sons house who also has Virgin but the 200Mb service and is in the same area as me. The results were both astonishing and annoying in equal measures... I averaged during the tests in excess of 200Mb by hard connection and just over 160Mb by WiFi.

And I pay for a 350Mb service and get less than 100Mb on a best day but usually closer to 40Mb. I am keeping records of all the testing that I have and continue to do.

With regard to the apparent testing of my service and reuslting in no problems found, perhaps a check of your equipment for accuracy is in order?

Unfortunately, the silence is deafening and now to rub salt into the wound, I've just had this months bill which has for no explained reason increased by some £6 per month on top of last months increase!!. Time to seek some legal advice perhaps!

I think it might be a case of a faulty router, you will have to wait until the Virgin staff come back to you, usually when they step in we step out so this is why you don't hear much else from the volunteers at this point. I have a problem myself and it's been 4 days from I've heard anything so unfortunately it can take a while 😞

conman33518 - Thank you for your reply and yes, there is most certainly a fault somewhere and during this inbetwixt time of your last reply and this, I have finally spoken with a Virgin Technician by telephone. So far this has not actually served any purpose as I was initially told it was that I had too many wireless devices attached. When advised that by connecting hardwire to the router it made little difference, she had me try that as well and to use Ockla Speed Test on two differing browsers. When the readings still returned sub 50Mbps she started to think it was my connectivity to the router... A 4Gb USB3 adapter in a MS Surface laptop by CAT6 cable to port 1 NIC on the Virgin Type 3 Router. I had explained previously that this precise setup was tested upon another 200 Mbps accout elsewhere and returned above 200 Mbps results, but this apparently did not matter and I was asked if I had another laptop with a Cat5 NIC and a different Cat6 cable. By this time I was to say the least becoming a bit bewildered and suggested that the solution would be to send an engineer to check out the input network and try a different router. This was not answered and I was advised that she had to look into it further and would call me back in half an hour... Let's wait and see...

<snip>   and I was advised that she had to look into it further and would call me back in half an hour... Let's wait and see...

However, can you please post your recent network logs, Downstream and Upstream power levels, and Pre and PostRS errors for comment.  It would also be useful if you setup a BQM here  www.thinkbroadband.com/ping