Ahmed-Deedat
On our wavelength
1,143 Views
Message 1 of 14
Flag for a moderator

Hi, I have a problem where when I start a download on DAP (download accelerator plus) then the download speed shows 360-403mb/s consistently, but when others also download using utorrent at the same time, everybody's speed goes to zero. It also shows spikes where speed fall to 0, then it picks up to 200kb/s before going to 0 and then after around 30s it spikes to 64mb/s and then falls again and repeats like this.

I had this experience on my old hub and thought it was damaged so it was changed with a new one and is still doing this, so to fix the problem, I tried to use different computers thinking that caused it, but to no avail. I also tried at different times of the day but no luck either. Only when I changed the mode from modem mode to router mode the problem went away.

In other words, this fault only shows in modem mode and not in router mode.

To recreate the fault:

1. in DAP paste large test file links like these: http://speedtest.tele2.net/50GB.zip

3. Put hub 3 in modem mode and only one computer directly connected to it, on that computer it should have those softwares on it; run 1x DAP and 3x utorrent and the speed will fall to zero and no actual download happens. The computer will have that one WAN address as its ip address. (Might need to restart hub 3 because it only broadcast ip once after bootup.)

This simplifies the set up and shows the fault easily.

To run many instance of utorrent on same computer for test, install in a folder with a txt file renamed to settings.dat, make a shortcut of the .exe with /RECOVER function. Copy the folder and paste to multiply then run each instance.

This doesn't happen in router mode but I bought a cool and expensive hardware for  router/firewall that has openVPN and active traffic/bandwidth even distribution functions which makes everything run really smoothly but this fault makes it impossible to use, can it be fixed?

I would appreciate any help/suggestions on this or things to try out.

Any help much appreciated, thanks.

Also included some pictures of the fault, I tested it and only 3 of the 10 utorrent was needed and 1 DAP to cause the fault, the pictures show that it stays zero for a while then picks up briefly, then falls again. 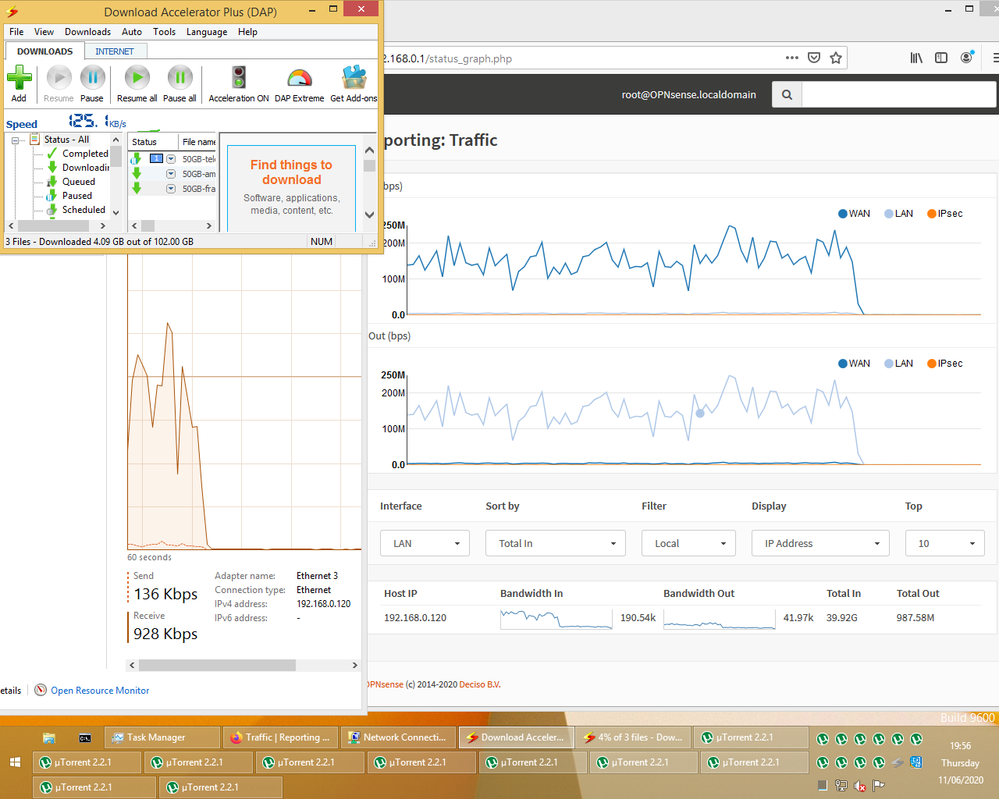 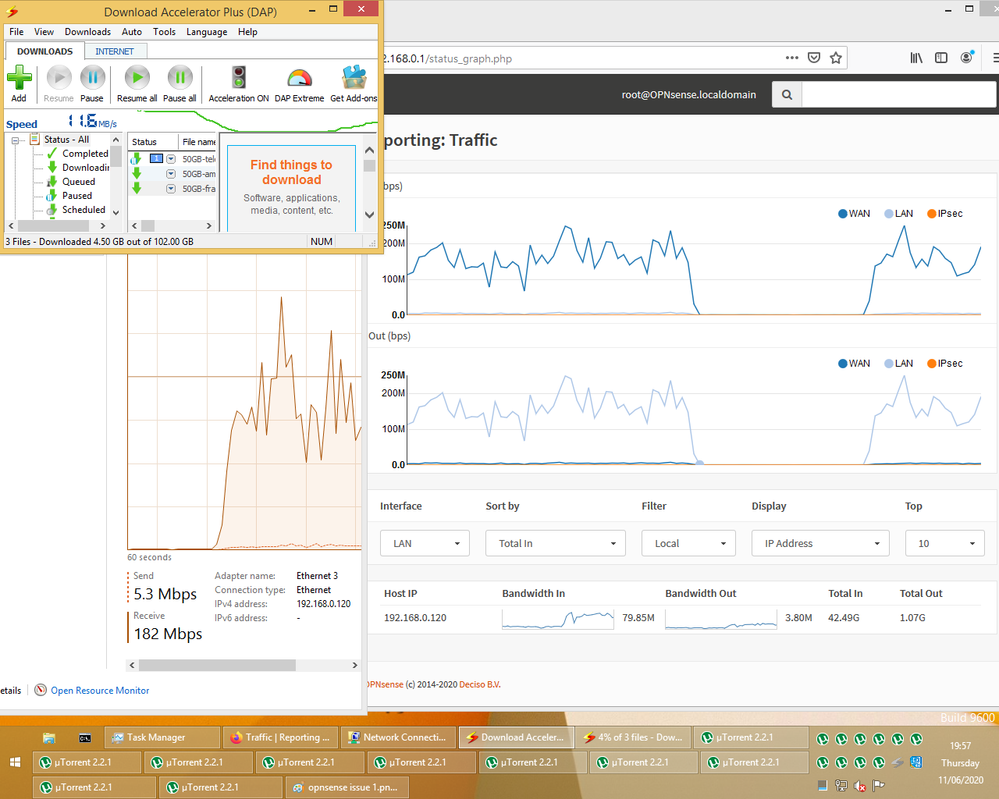 then starts again for a while 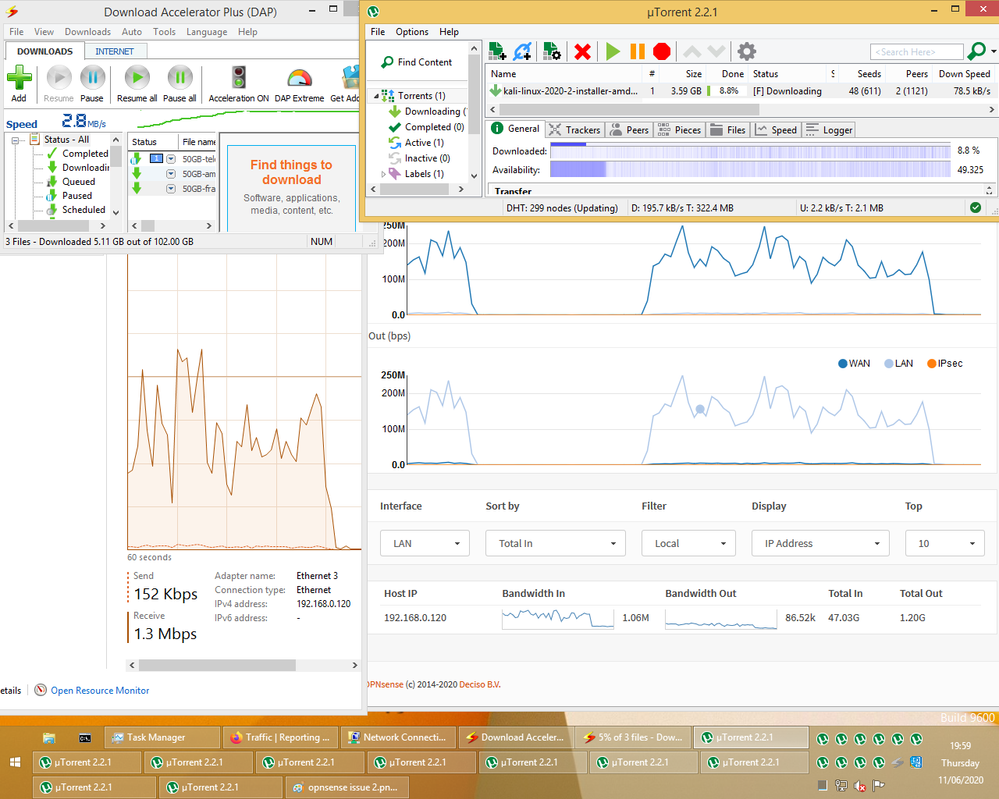 it then falls again for a even longer time

gary_dexter
Alessandro Volta
1,093 Views
Message 3 of 14
Flag for a moderator

Ahmed-Deedat
On our wavelength
1,065 Views
Message 4 of 14
Flag for a moderator

Hi, thanks for the suggestion.

Thanks for reaching back out to us, please run the BMQ test for a few days and post the results here so we can have a look and see if anything stands out.

I set the hub 3 into modem mode then connected it via ethernet to one computer. On that computer I ran the BQM and had very little computer/internet usage just to contrast the difference between idle and average use. After some hours I used DAP to download 8 files simultaneously and started 5 of the 10 utorrents and kept them running for a few hours before closing all the applications down and leaving the internet in idle/less usage for a few more hours.

The effect is that the hours where there was little internet use, shows some good results, then after I start downloading with DAP and utorrent, there is some packet loss and high latency, then after I stop them, everything goes back to being okay.

I started a thread some time ago about some intermittent issues and tried various suggestions and in the end they authorised a hub 3 replacement but the problem is still there. Can you book an engineer to have a closer look at the problem both in my area/set up?

Here is the link to that thread: https://community.virginmedia.com/t5/Speed/slow-upload-speeds-with-fast-download-speeds-recently/m-p...

Here are some pictures of the BQM and windows task manager network activity monitor which shows erratic start and stop behaviour. 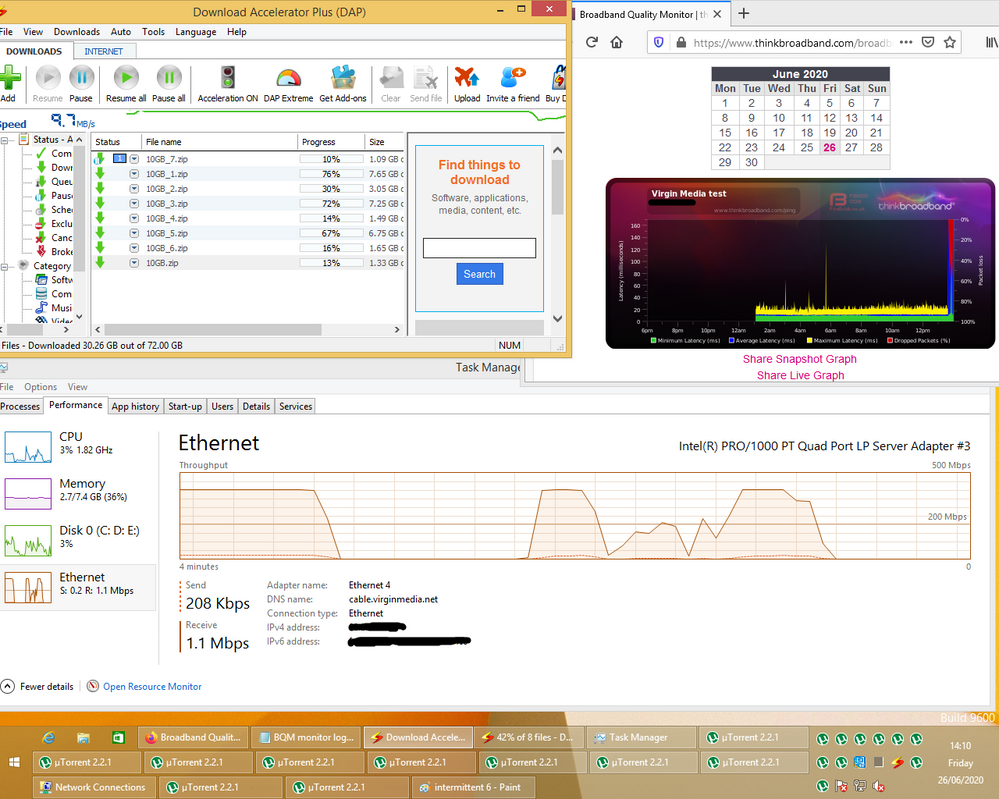 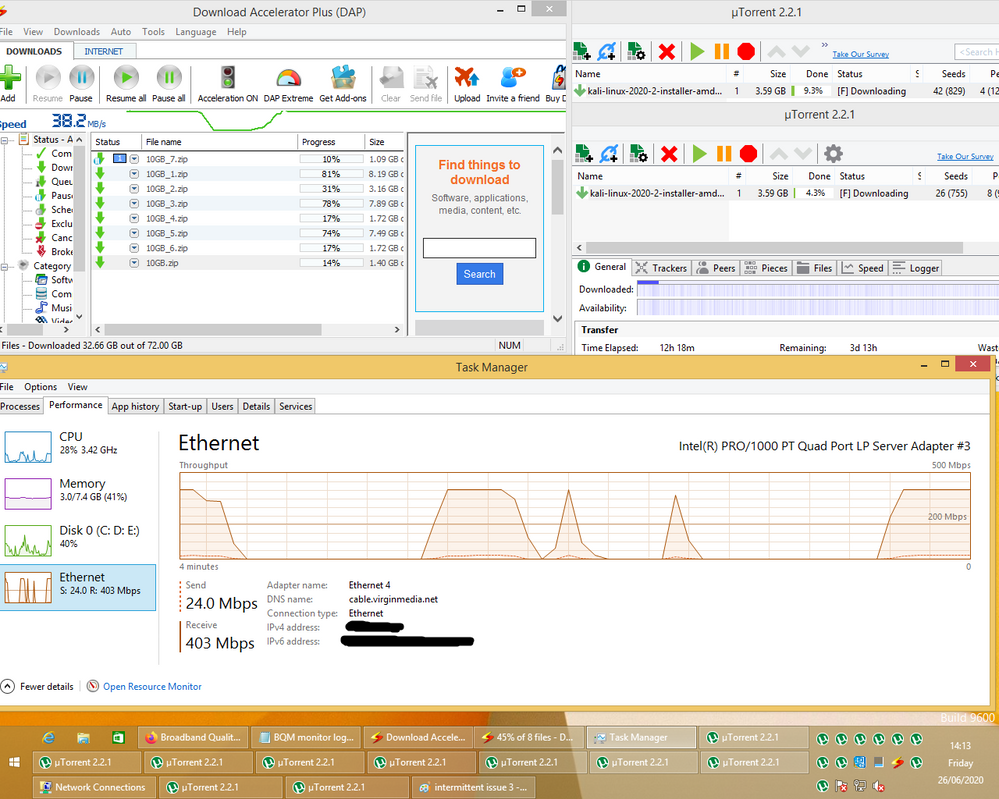 this shows the 403Mbps download speed, the software want to continue downloading, but the speed slows right down after a while 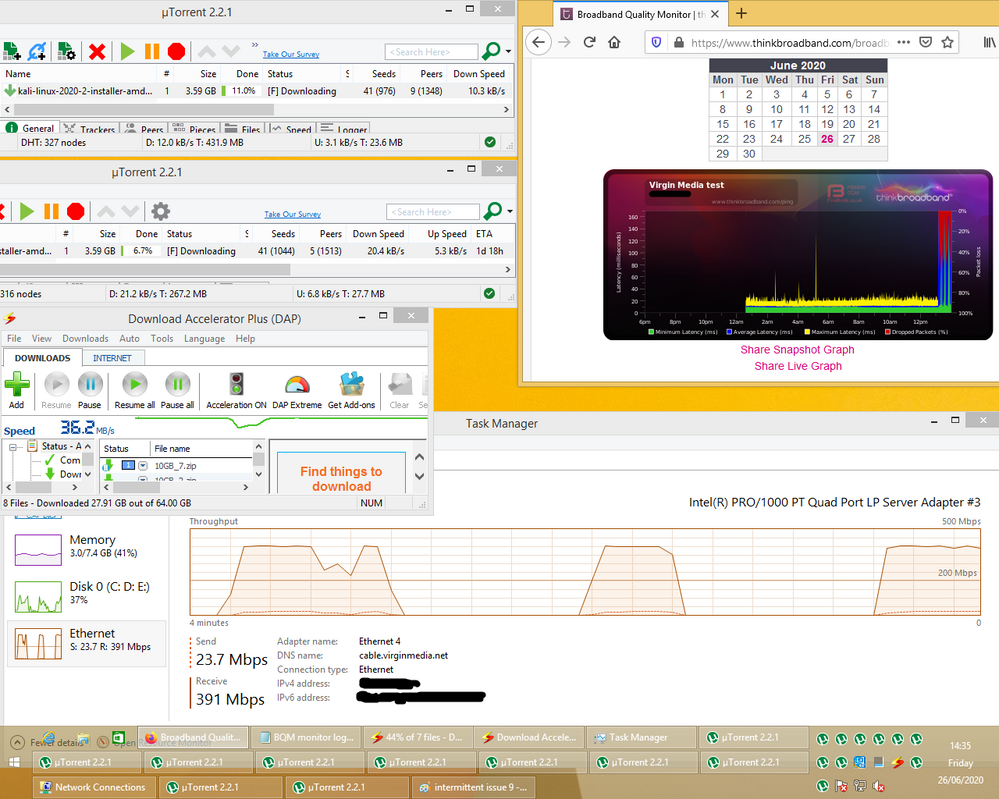 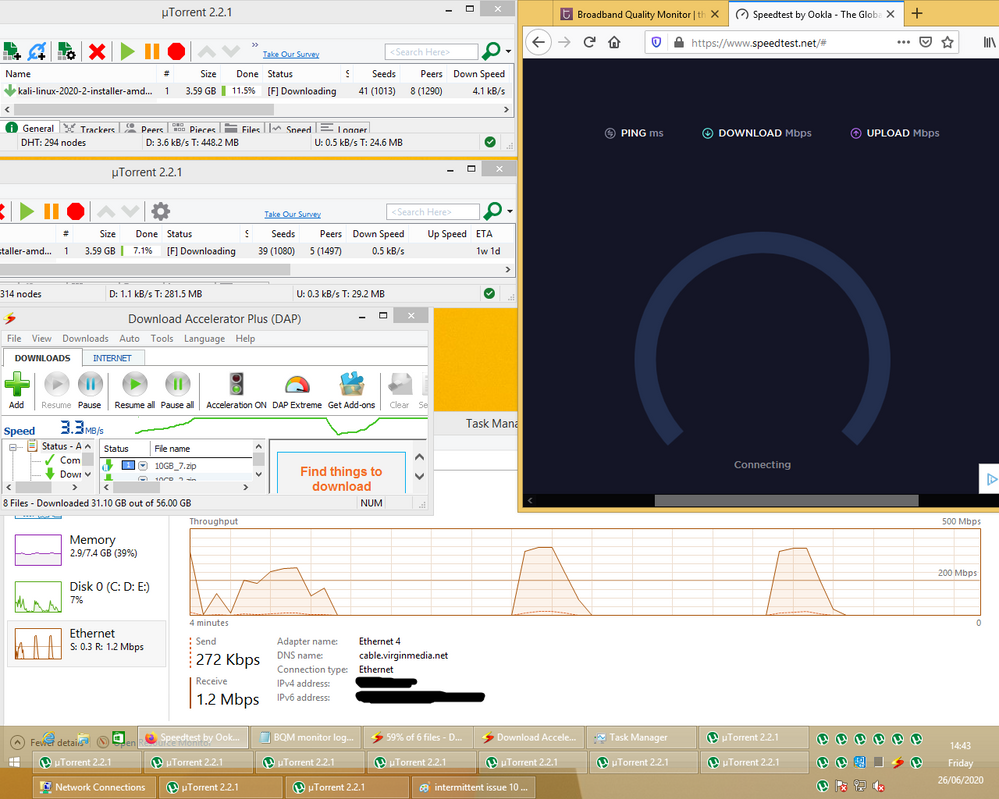 this shows that you can't browse the internet like this, even speedtest refuses to connect/load, note that there is very little internet/bandwith use

The BQM runs off your public IP address - you don’t “run it” on a single device.

Post back (as text) the Network, Upstream and Downstream logs from the hub admin pages

The BQM runs off your public IP address - you don’t “run it” on a single device.

Not true I can forward ICMP if I wanted to on a device and not the router.

With Free Download Manager 5 I can torrent and download a file fine with the hub (SH1) in modem mode with my ZyXEL router and on 100/10 torrent takes most of the bandwidth but my BQM shows fine and browsing and youtube a video fine.

Try enabling QoS -10Mb from your download speed you get by speed test I get 110Mb but choose to limit below that to speed to not buffer back and Egress cure latency and -1Mb your upload speed.

Just saw this thread, it seems to be a firmware issue with the Hub 3, you get the same issue when torrenting or using a download accelerator such as axel to download gitlab repo's I have noticed....

It only affects the Modem mode, not sure if the reason for that is that IP filtering and other parts are turned on in the background or for another reason, if you set your hub back to normal mode, turn off IP filtering, firewall etc. pretty much turning off everything and setting it up to work with your zyxel, can guarantee 100% you won't have the speed issue anymore, only issue is if you want to forward certain ports, you have to open them on both virgin media's router and your zyxel and the latency in hub mode is ever so slightly higher, not really noticeable however you can then download at full speeds without any drops.

Currently have an Openwrt router connected via wan port to the virgin media hub3 in normal mode and this was the solution to get rid of all performance issues and speed drops.