I have been upgraded to a M500 package but I am not seeing the speeds that I would expect.

I have gone through the call centre twice but they have not been able to help me resolve the issue.  The first call resulted in a new Hub3 being sent out but that made no difference whatsoever to the speeds.  The second call was stepping through the same diagnosis and closed out with a vague pronouncement that it seemed to be an equipment issue with no way forward provided.

As things stand I am currently seeing around 50% of expected speeds using a wired cat6 connection.  I am able to achieve c. 940 Mbps transfer speeds on the internal network using this link so I believe all the equipment and cabling to be good.

The highest speed I have ever seen is 250Mbps down / 37 Mbps up.  This is via an internal connection with the Hub3 in modem mode but I also see similar speeds when connected directly to the Hub3 running in standard mode.

The Service Status is shown as good and I have called 0800 561 0061 and there are no issues reported for the area.

Any thoughts on steps that I could take to try and get the speed issues resolved?

Not seeing any change in speeds which suggests an ongoing issue - any suggestions would be appreciated.

Try a reboot to see if the Hub can renegotiate a better connection using this method ...

Switch the Hub off using the small switch on the rear of the Hub next to the power cord and pull the PSU plug from the wall socket.

Give it a good 5 minutes put the plug back in and switch the Hub back on.

Allow the Hub a few minutes to fully restart then try your connection again.

I have done a few power cycles on the hub - turn off, disconnect from the power supply, wait 10 minutes and restart now.

The only change I have observed seems to be a slight downward move in the test results observed on speedtest.net.

Upload appear to be fine but downloads still remain < 250 Mbps.

Thanks for your post on our Community Forums and a very warm welcome to you!

I've looked at the stats of the hub and everything appears to be in spec. Are you still experiencing a slow speed on an Ethernet connection? Can you perhaps run another speed test with the hub in modem mode so we can see if we're getting the correct speed into your property?

Running a speedtest in modem mode is still resulting in the low speeds on download with upload looking to be fine: 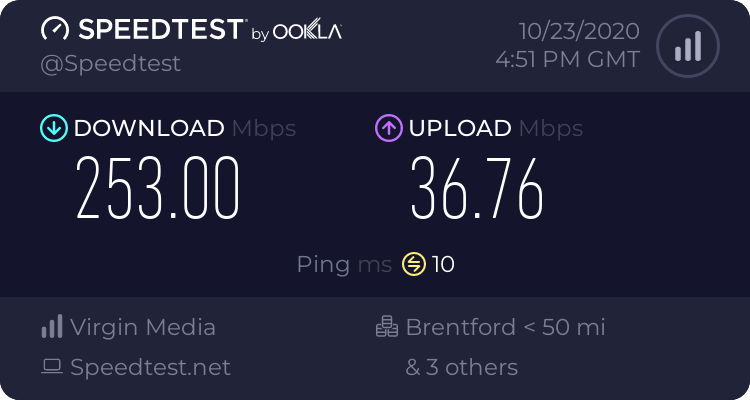 Thanks for coming back to me dgalbraith,

Can you possibly place your device in safe mode to see if the optimum speed can be reached?

Device in safe mode connected both directly to the hub operating in modem mode as well as switched through my home network and not seeing any differences.

I don't believe that it is driver/device related as I am able to achieve very close to theoretical maximum transfer speeds for a 1Gbps ethernet link on internal transfers on the same machine / cabling. 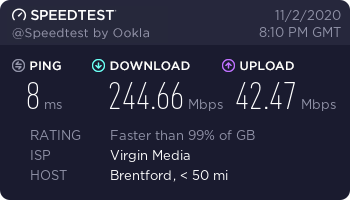