Have a look at these numbers (before and after Word Docs) as a lot to copy/paste.

I will explain later after I deal with my mother (housebound).

I'd willingly take a look, but I'm sorry I won't download files from third party websites simply out of healthy paranoia.  I'm sure some others will, but the purpose of this post is to say you might be reducing the number of people who'll help.

I'd suggest taking it, breaking it up into chunks that can be posted here?

You haven't described the "what" surrounding before/after. Before/after what?

The stats show a change in power levels - so maybe VM changed the amplifier in the street cabinet.

The stats show a small drop in SNR in various (few) places but generally stable and all within acceptable range.

So, what is the real problem you're facing that could be put down to SNR?

As I said I would explain once I dealt with family issue.

I like many have had my ups and downs with VM but they always in the end fixed my issue and the issue is always outside (not me or my PC to blame which is their default generic BS excuse).

I had a stable 300Mb/s then upgraded to 350Mb/s and it was a mess and I went as far as cancelling and was one day away from the disconnection when I saw an engineer in the pot outside.

I told him my issue and he shows me what was causing it and said whoever left this in such a mess last time should be sacked, he said he would have it fixed properly by next day but thinks it will be better than it was for now.

I went to test it and seen I now had 4 Upstream channels (I had 2 before the issue and 1 during the issue) and everything was once again great.

At 8pm another engineer was at the pot and I went out and he said that is it fixed 100%, saves waiting till tomorrow and repeated how much a mess it was and what he thought of the person who left it that way.

I then three weeks ago took the 1Gb+HUB4 offer and again it is the same temperamental (you can see in my posts I have uploaded some real joke of screens as well as some really good ones).

I have never received the call from retention's to update my account that I was supposed to get three weeks ago and yesterday late afternoon I got a call from an VM engineer saying the noise coming from my house is very high.

He suggested the default general loose connections I told him the only connection I made was at the HUB4 all else is untouched for years and under the floor.

He then jumped on that bandwagon and said they might be too old and corroded.

He wanted to arrange to come in and mess with my connections, I told him about my mother living here in a bed in my living room where these cables come in to the home due to her terminal illness and that was not practical.

He understood and said all he can do it get someone to test the cable outside but that will not prove it is not my side if it comes back ok at their end.

I could disconnect the cable for them to test just the cable.

I suggested I swap the Splitter that is 20 years old under the floorboard and run newer cables just to be sure but told him this was all fine till day one of the 500Mb/s upgrade and the very same day an engineer was messing with the pot outside (I joked to this engineer in passing about not breaking my new 500Mb/s).

Last night l lifted two small short floorboards that act as a hatch and the splitter and cables are all in very good condition hanging from beams and not on the ground and bone dry.

The silver coatings had tarnished as expected but the main thick black cable that VM bring into the house (mines is underground and then through three feet of sandstone)) is minted and still a nice brass coloured  F-Connector.

I remove it all and uses isopropyl and cleaned it even though it was fine and I then fitted the new splitter than came with my HUB3, and ran the premade cables that came in the same HUB3 kit (black hand tight collars/crimped F-Connectors) and ran across my carpet with my floorboards still up as I type this as temporarily measure.

Now that is where I got the Before and After readings but some are crazy in both cases with many decimal point places of a difference between some channels.

I have no errors so far.

I can now hit 900+ in Samknows most times were as before it was random but the outbound side of Samknows is also random though speed tests are a bit more consistent and actual real file downloads are full speed so far.

I was told VM would possibly kick my HUB4 off the network soon due to the noise.

I feel now I have done more than enough testing and all that remains is to swap the HUB4 over (I doubt it is faulty).

I am sure the issue is in the pot or along the road in the cab and all along the road VM have cables hanging loose with broken brown covers with no lids loaded with water/rust.

I asked an VM engineer to tidy up next doors last time he was outside and he did fit new cover. 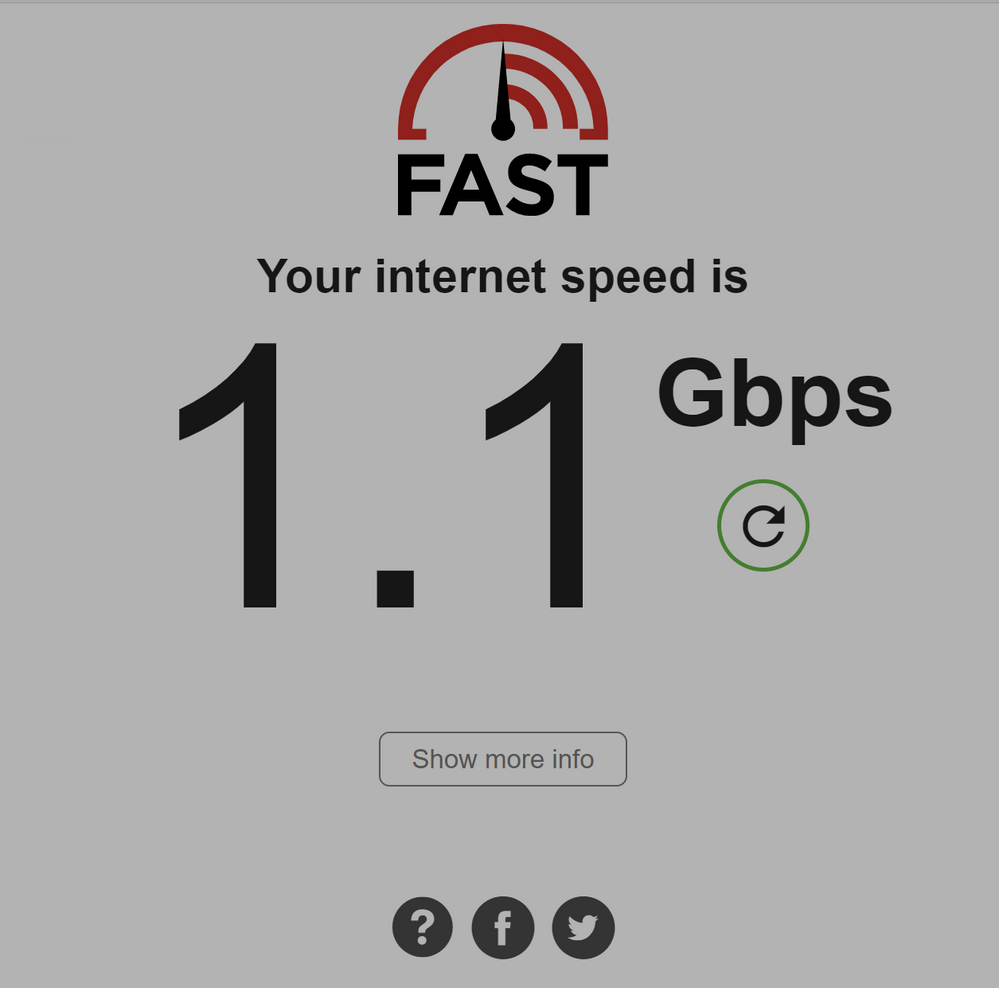 What does the Hub 4 report?

That is the HUB4 in charts above, if you want me to get some different info just ask.

Or you mean speed (again the Samknows is not the best IMO, I have many screens of both inbound and outbound low or high).

Example from a few days ago: 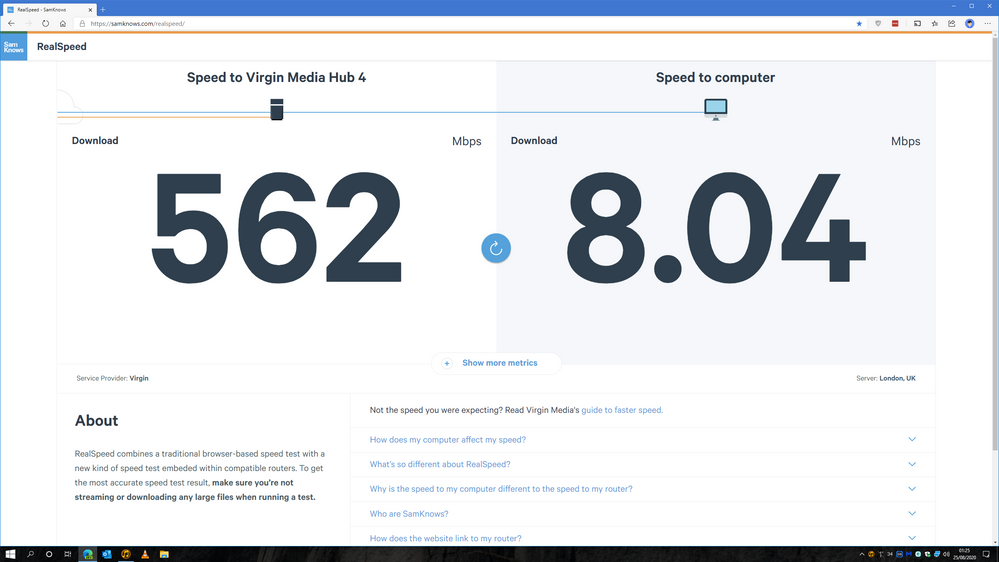 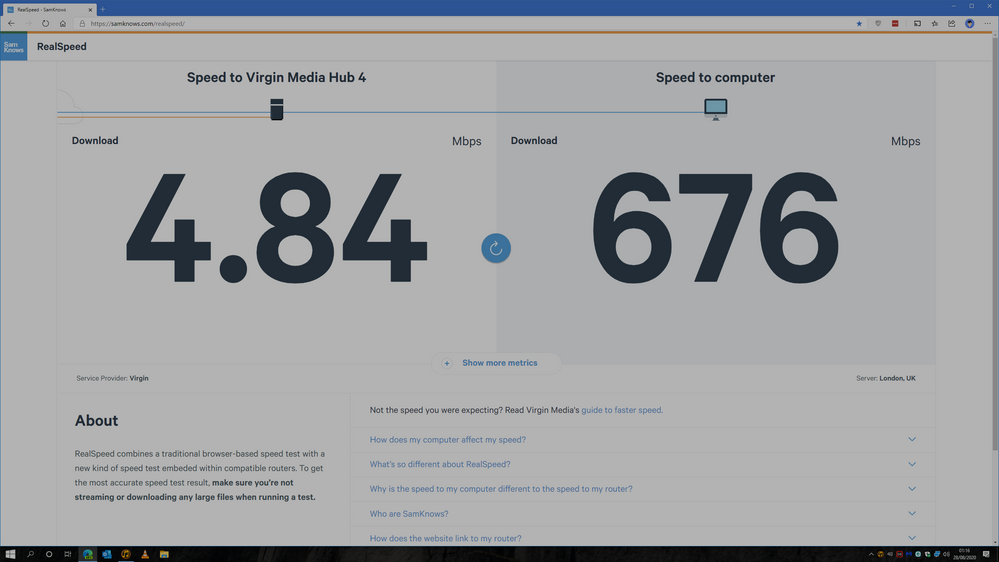 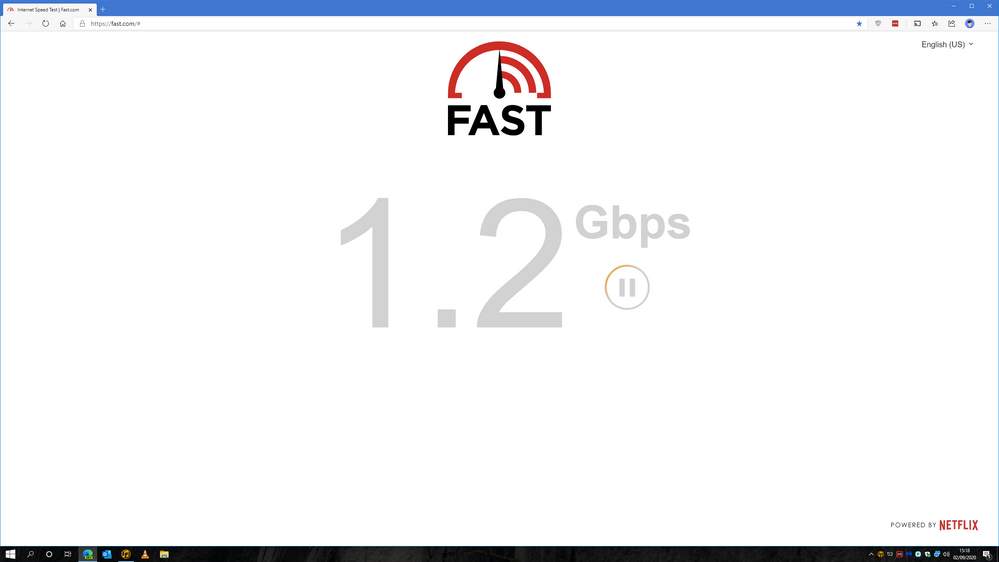 You mentioned earlier that you were concerned with noise. That would show up in the BQM graph as red, particularly if it was on the upstream.

The Hub 4 has a small overhead between cable incoming and Ethernet outgoing but, at a quiet time of night, you should hit a download speed of 1Gb/s on Speedtest.net to a VM destinnation and c. 52 meg upstream.