Forgive the mega post, I've spent a ton of time browsing posts so tried to include much of whats asked for from the get go. Really appreciate any time support anyone can lend.

After 6+ months of living with (due to work / time), battling with (on the phone support) and reading up on (here is the forum which is by far the greatest source of actual logical info!!) its time to make my own post and ask for help here as i'm fast running out of mobile data every month.

Issue:
When its not broken, its great! Low latency, great throughput!
Frequency of occurrence varies vastly but most days its impossible to get through an hour meeting without at least a few drops outs (results vary based on application, Zoom quits and restarts, teams / webex / skype break up, robotic voices etc).

Some are very short lived and return within 10-15 seconds, other have me unusable for up to a minute. It very hard to pin down a pattern, some days are better than others.

Progress so far:
During the Christmas break I waited it out (50+ mins) on the phone and was told there was an issue in the area: Work Order: 12148898 (Expect Completion 29th Dec).

This slightly changed the profile of the symptoms in that before the fix, id have a ping running it would mostly stall, there would be heavy loss / contention along with any successful packets being in the minimum 600 ms range so essentially completely dead.

After the "fix":
Whilst the internet is effectively still dead during the spikes, pages wont load, calls dropped, pings up to the 300-600ms range etc etc, when staring at a ping its a softer outage than before, less are timed out / dropped and tends to recover a little faster.

So, what did you guys do for this fix and can you do more of it ?

My own ping script to hit google DNS written on Jan 5th having been kicked from all my morning meetings: 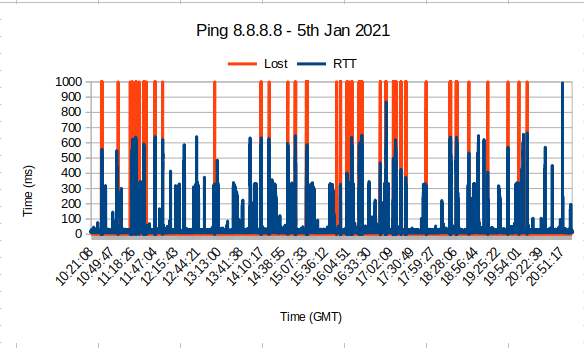 Will post Modem Logs in a Separate message below

If possible can you set up a Broadband Quality Monitor (BQM) at thinkbroadband.com - this will give you an insight into what is happening with the signal at the other side of the Hub, it will take a few hours to get any kind of trend showing although you should post the link straight away.

Please post a 'Live Link' to your BQM on here straight away.

Under your BQM graph are two links in red.

Copy the text in the Direct Link box, beware, there may be more text than you can see.

In the URL box paste the link you copied and in the ‘text to display’ box write My BQM then click OK - you can post the link straight away.

Hi MikeRobbo, in case you thought i was not replying, I already posted a BQM monitor in my initial post following your instructions from another thread 🙂

To VM staff: If the network is oversubscribed (the impression i am getting looking at other similar posts) Surely it would be better VM just reduced my and others overall speed in exchange for stability until they can solve the issue .

My apologies, I see it now.

No worries at all, it was a link in a wall of text so easily missed!

Your Hub data all looks to be in spec.

Your >> BQM << however is another matter, I think you are suffering from a WAN side Signal to Noise Ratio (SNR).

You need to contact VM to see what they say.

If you wait on here Do Not bump the thread it will put it further down the VM 'to do list'.

Thank you MikeRobbo! That begins to narrow it down.

I'll try them during the week again and post back here if I can get through to anyone.