I upgraded to m200 earlier this year, but since then I have been unable to get more than 100Mbps on my PC, according to speedtest.net.

I know the problem is within my own network, as my phone gives over 150Mbps when in the same room as my Virgin Hub, and I can get 20Mbps upload on the PC.

My PC is a long way from the hub, so although I can connect to it via Wifi, I can't get very fast speeds (around 30Mbps). I have a WD N750 router connected via an external cable to the Virgin Hub, and the PC is plugged into that. Both the router and my wired network card are Gigabit, so in theory 200Mbps should be possible.

I'm thinking about getting a new router, as this one is rather old, but there's no point if it won't make a difference. I've already wasted money on a Wifi extender that doesn't detect the hub's 5GHz band and tries to provide dual band from the 2.4GHz band only.

Is it possible that the limitation is imposed purely by the external wiring? The fact that I consistently get just under 100Mbps is suspicious, indicating an imposed limit, rather than a bandwidth problem.

One thing to check in have a look at the Ethernet cables and they should be marked what Cat they are, you need a minimum of Cat 5e to get full speed, if they are just marked as Cat 5 then that it the problem.

Thanks: that's almost certainly the problem. I'm using whatever old network cables I had around. Unfortunately, it's unlikely that the outside cable is cat 5e, since it was installed back in the 1990's, so there's not a lot I can do about that.
0 Kudos
Reply

Unless you fitted external ethernet cabling outside (did you) - there is none fitted by VM. Only cable you need to think about is that between the Hub and your devices. As well as the cable issue - make sure your devices are capabale of gettin more than 100mbps - if they have a 10/100 NIC network card (or are limited to that in the settings/drivers) they never will.

Myself had to look it up, Cat 5e didn't become available until 1999. If you track where your external cable goes could you not replace it as Cat 6 external is pretty cheap at £19 for 100m.

You should probably check the link 'speed' in your network settings on your PC to confirm what's discussed in here: 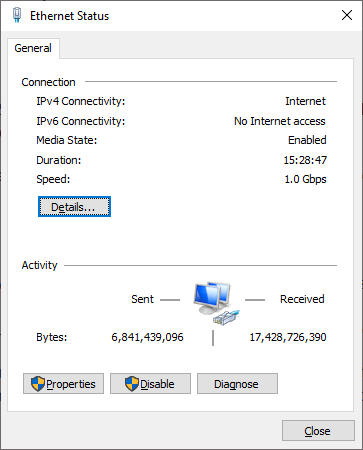 The external cable was installed by Cable & Wireless (it's been there a LONG time!), because at the time, the only place I needed internet was in my study, but the TV was in the lounge.

It's not a question of the cost of the cable, but the fact that it would have to go all the way around 2 sides of the house and 1 floor up. TBH, it's not worth it for the extra speed: the M200 upgrade didn't cost me anything, or I wouldn't have bothered with it.

Thanks for all the answers, but I guess I'll just stick to a perfectly adequate 100Mbps. Or I would if I could actually get my wired ethernet connection working reliably. Yesterday it worked, today it's wi-fi only. But that's another story!

I would say that the most likely reason for the 100 speed is that the PC is connected on an old Cat5 cable or the PC is limited by an old 10/100 network card rather than a 1GB one. Both issues are easily resolved.
There are plenty of small companies who will run good quality ethernet cabling for you and others who will test and change the network card.
Another solution would be to improve the wifi speed/consistency at the location of the PC (and also the whole property) by getting your own Mesh wifi system.