Yeah so in the past week or so my download speeds have dropped to between 20 and 120 Mbps.

I called today and they say there's no issue, we rebooted everything and I'm running modem mode on a wired connection. Usually I will see between 800 and 1000Mbps so with that in mind, and the fact I run a wired connection I don't think it's a setup or environmental issue (e.g neighbours new router).

This is from multiple download tests, speed tests, and just noticing it whilst im trying to stream video with quality drops on lots of services. It's also weird that my upload stays at 50Mbps but download drops to 20Mbps...

I'm guessing this is just a utilisation issue in my area?

I initially had a double take moment when I saw your mention of 1gbps 'normal' download speeds - a little shocking for us lesser mortals in the wrong postcode stuck with 350mbps or thereabouts.  I note that this is your second posting this morning, freshly opened, for what is essentially the same problem.

As a general rule of thumb, running two separate threads will not get you any more attention or support, indeed it will probably cause massive confusion for all, and end up with your getting all sorts of conflicting advice and support.  I strongly suggest you close out this thread and stick with your first one.

However, for compleness, some obvious thoughts:

1.  You must remember, as I'm sure you know, that only the 'local loop' (as ADSL folks call it) or the home to exchange connect runs at (just under) 1gbps.  What happens once your traceroute starts replying is a different matter.  Not all internet connections are made equal, and once in the backbone, you are sharing with EVERYBODY else.

2.  Even at 1gbps, you are still sharing a finite resource, and no broadband connection is guaranteed to give you full throughput, all of the time.  Whatever the technology and speed, broadband is always subject to sharing and contention.

3.  Do your problems appear only at certain times?  I'm personally suffering with time-bound packet loss which lurks in the local virgin media networks - some of this is due to pandemic related high user of broadband bandwidth.

I appreciate this is all probably obvious. I would strongly suggest caution in the use of internet speed checkers which are likely not built with such high bandwidth connections in mind.  The actual layer two technology does indeed impact results at higher speeds.

Stick with one thread for one problem.  You know it makes sense.  I do understand, however, that you are paying a high price for premium connectivity so are reasonable vexed at this.

Just to mention I changed the topic title because it was huge and just commented on another thread - I didn't want to hijack his thread so I made my own. I didn't start two for the same thing.

Not trying to spam - as I said to the engineer at least it works and the latency is stable 🙂 Even if I am getting 2% of my speed.

What are your speeds at the moment?

I had one test in the past 20 I ran today that went to 300Mbps, after calling the engineer it dropped from around 90 to 20 and hasn't recovered since.

And via this link: https://samknows.com/realspeed/ 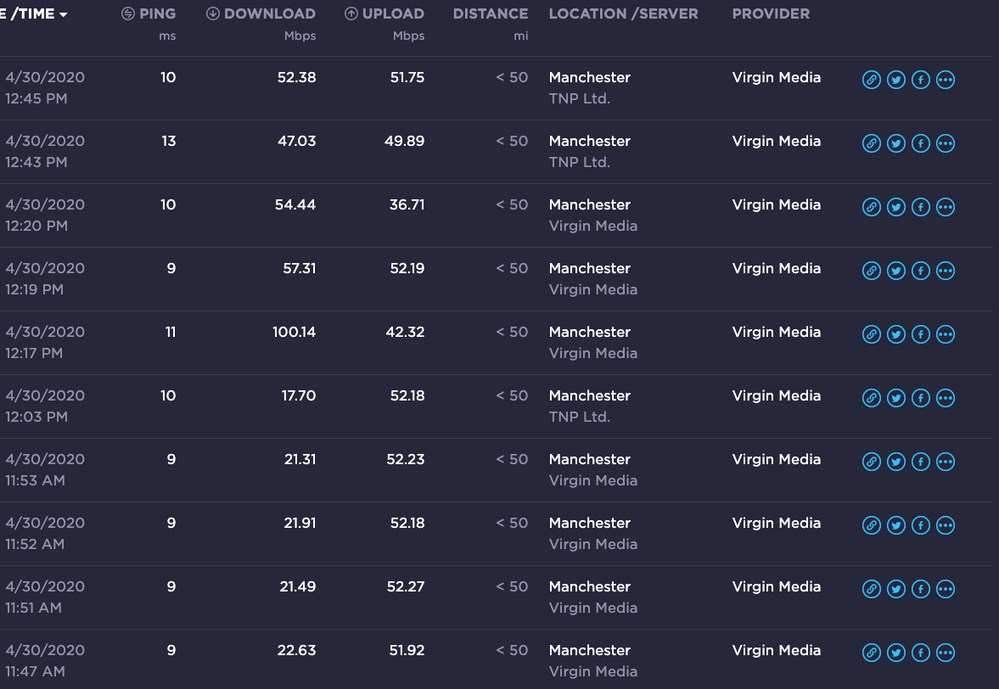 My apologies - the forum seems to consider a changed topic/subject as a new post, and depicts them as being separate threads, rather than the same one.  I rarely even look at a users' history either, it was only that, as I mentioned, I was surprised by your reported average download speeds at the outset.

In this context, my advice still stands, however it would be worthwhile if you performed some of your own diagnostics.  There is some excellent advice on checking the technical aspects of your router/hubs diagnostic information pinned to the top of the forum posting list, which goes in way more detail than I can manage.

However, it does seem very strange that you've experienced such a significant drop in speed, in such a short period.  I appreciate that you're using (if my suspect memory holds true) wired connects in the home, but despite the obvious, have you:

1.  Swapped out the ethernet cable for a new one?  Is the cable in question definitely a category six cable, as while cat5e is still technically sufficient, it will struggle if your consistently running at close to wire speed.

2.  Again, questionable memory, but whether you're running the hub in router or bridge/modem mode, what is the nature of your laptop/desktop device, and indeed the quality of the NIC contained within?

3.  You mentioned cabled infrastructure, but do you have any other switches 'in the mix'?

I am actually quite serious about your PC (whether laptop, desktop, Windows or some flavour of *nix) because to run an adapter at full speed is actually quite a challenge for may machines, as most ethernet adapters will be relatively cheap devices, generally connected to a x1 bus, and that will rarely be of the PCI-E 3.0 standard.  When you throw in the processing requirements to 'feed and water' such a highly-used connection, all sorts of things can crop up.

Indeed, most high-end servers rely on multiple adapters, and those with high end chipsets which do a lot of on-board processing, to satisfy high bandwidth requirements.

Worth bearing in mind.

Image not approved yet.

What speed did you get?

No problem, thanks for the detailed responses. I've ran diagnostics of my own, probably not to the fullest extent but I just have a lack of time at the minute with everything that's going on.

I've rebooted everything in the network from modem to PC, the Hub 4 is in modem mode with an EA7500 all with Cat5e between everything. Everything has a gigabit capable NIC, I even disabled all of the "extras" on the router such as Express Forwarding (some Linksys feature), media prioritisation etc.

Also tried 5GHz WiFi just to test and it gave pretty much the same results of 20 - 60Mbps when the connection had a 1,300Mbps TX rate.

R.e image: It was my speedtest.com result history, I can't run the other test because of my hardware it says I need some special hardware to run it. But I tried fast.com also, and multiple speedtest.com servers. And downloading 10gb test files from different sources and monitoring it just to be sure.

But yeah overall I'm not too vexed just difficult to recommend a service that you pay a premium for and get what was advertised only a fraction of the time from what I've experienced so far (long-term). Unless it is equipment, but I am finding it really hard to pinpoint anything at the minute especially since there's periods of it working fine.