Been with Virgin Media since last May , I have never had a strong download speed , I have been paying for the 350 VIVID. I check the connection every so often and not once has it been above the 30mbps. I feel really let down. I shouldn't be paying for a service that gives me a small percent off what I should be getting.

I have tried wired connections , moving the hub about (within limits as It cant go far)  Restarting it , disconnecting all devices and doing another speedtest... etc. Youtube , blah blah.

I was looking into it tonight and I came across a few things , have I even been given the right speed?

I feel really let  down by this service. 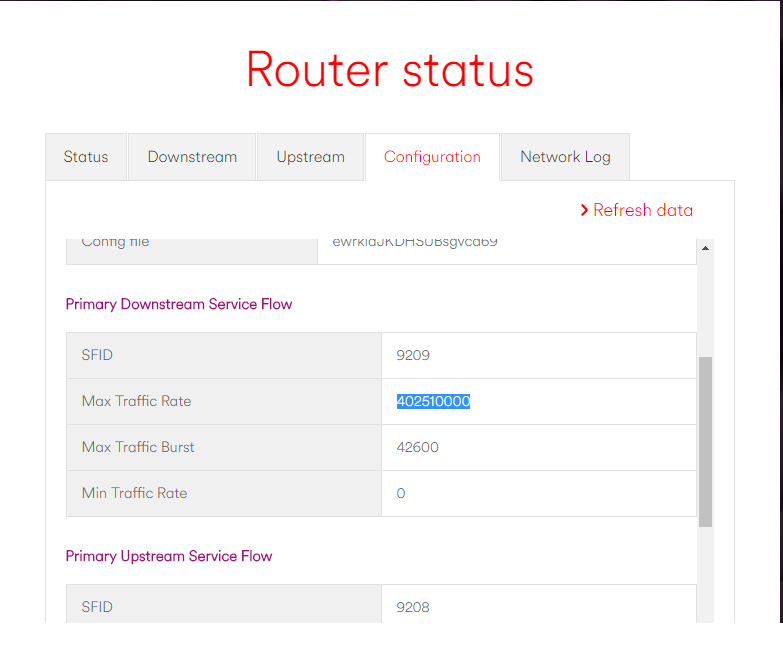 I think you've picked up the main thing - if my Hub is anything to go by, your Max Traffic Rate is missing a zero, which would possibly be a "fat finger error" by VM's staff when configuring your connection, but the error numbers suggest there might be something else up with your connection as well (although I must admit it is mostly beyond me to comment much on the router status data).

The good news is that whilst it may take a few days, both these probable causes can usually be resolved once the forum staff to pick this up - they're good and keen to help.  Sometimes there's a delay of several days, or some kind soul may bring your issue to their attention sooner.

Get the service working first, then I suggest you raise a formal complaint asking for compensation in respect of the slow speed for the past nine-ten months.  I'd strongly recommend complaining in writing by post - that keeps a formal record, and avoids dealing with VM's awful offshore call centre.  I'd suggest asking for at least £15 a month compensation, given that they've delivered about a tenth of the speed you've been paying for.  Hopefully they'll admit their guilt and compensate you.  However, if they won't offer any compensation, or offer something you think is paltry like a fiver a month, tell them you reject the offer and want a "deadlock letter" so you can take the complaint to CISAS (the industry arbitration scheme).

CISAS are totally independent, the service costs nothing for you (several hundred quid for VM though) and their findings are binding on VM.  Going to CISAS doesn't mean you'll "win", but about three quarters of complaints are found either wholly or partially in favour of the customers.  If there's a spot of difficulty, sometimes just asking for a deadlock letter can persuade VM to reconsider their position, because they know it costs them a lot when CISAS take on a case.

Thank you so much for your super fast reply , I appreciate it.

I will be putting in a complaint in writing then , no point in calling as I don't seem to have much luck with overseas staff , is there anyway of talking to a British member off staff on the phone ?

You have helped me loads and fingers crossed a member of staff will reply on here.

Lets hope it is fat fingers and they add an extra 0 on the end of mine ha!

I am sure I can wait a little longer , has been like this since the day I got it , just don't understand why I did not get in touch sooner! Silly me.

Andruser
Problem sorter
27,661 Views
Message 7 of 17
Flag for a moderator

"is there anyway of talking to a British member off staff on the phone ?"

Yes.  You can try asking the overseas call centre to transfer you to a UK based VM representative.  Sometimes they do, but I would expect a low rate of success because that is the last thing Vermin Media want to happen, as word gets round and everybody would do it.  The most reliable way is to call the customer services number on 150, and within the options select at the appropriate times "about my account" and "thinking of leaving" (so dial 150, option 1, then option 1 then option 4 then option 5).  That will get you through to the UK based team who deal with customer retention - in my experience they're very helpful, and they've got a lot of leeway to provide compensation or discounts. This won't be a 24 hour service, and if you dial outside normal customer service hours it is possible that you'll get put through to India, so try and call during normal UK business hours.

Bear in mind that Retentions are not a technical support team, so can't fix the problems themselves but they may be able to escalate the issue if you tell them that if the problem isn't fixed and you get compensation you'll leave.  Note that formally their job is customer retention, not complaint handling, and they may be required by their processes to tell you that if you do leave now you will have to pay an exit fee - I assume you're on a 12 month contract lock in until May.  At that point, keep it polite as they're just doing their job; I know from personal experience that it is easy to get wound up and angry when things go wrong, or you aren't getting the outcome you want, but dangle the carrot that that you can cancel penalty free in May, AND you can still take a claim for compensation to CISAS (they should know what that means, and that it costs VM a lot of money), so it is VM's interest to get a positive resolution to your complaint.

thank you for all the info , I hope to hear from someone on here that can help me more , I have not yet managed to get a UK person on the phone lol

Bumping my post . hoping to get a reply from a mod to help me fix this please!
0 Kudos
Reply
Highlighted

sorry a little rant , its crazy that my upload speed is faster than my download now.  Hope this gets sorted asap !