As many people have already mention here, as well as blowing up Virgins Twitter pages, my internet has also gone down the toilet over the past few days.

This wasn't something I had noticed until yesterday morning when the modem decided to reboot itself for some reason. After checking my speeds out of curiosity, I noticed that they had dropped considerably. Worse than usual when this happens (it happens a lot).

A few reboots of the router did nothing to fix this. I've looked over the internet and found people in random regions complaining about slow speeds. Talking to a friend on Twitter, from Southend-on-Sea, says his Virgin speeds are maxed out. So no problems there, but major problems here (Northampton).

Usually when my speeds are affected, it's just the download or upload, but in this case, it's BOTH speeds being slowed down. This being the case, my upload speed is rubbish, and as a result I cannot upload my videos to YouTube (my main source of income) and therefore am losing revenue, and general web browsing feels very slow and cumbersome.

The two links above show my speed tests this morning. Test both wired AND wireless. Both yield similar results as you can see. So definitely not a wireless issue, as some people often suggest.

I've also run these speed tests on my phone and Xbox One X, and they also show greatly reduced speeds.Even on wireless, my Xbox and PC can pretty much max out the DL and UL speeds.

And I suppose I shall post my modem logs:

Testing via a phone or console is not a way to achieve an accurate speed test.

Testing via a phone or console is not a way to achieve an accurate speed test.

I know... hence why all of my speed tests were primarily done on my PC, as I always do. Wait... out of that entire post, that's the only thing that caught your attention?

After an hour of trying to get this post done with various things going wrong in between, it just randomly starts working?! I'm gonna poop myself. Download speeds still seem erratic, hovering between 100 and 170 with each speed test. Upload appears consistent though and that's what I really need.

Did Virgin do something on their end or was it just... random? 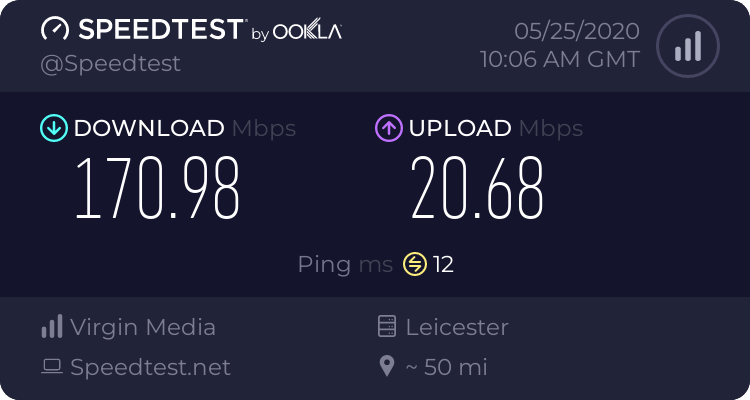 How has the speed been since your last post?

Since my post, download and upload speeds have been steady and stable. I just did a speedtest after reading your post to make sure, and yeah... pretty much everything is back up to what it should be and running well. Does anyone know what what was going on with VM at that point?

We are not aware of anything in your area that could have affected this, our apologies.

I'm glad to hear this is better for you.