Yesterday upgraded from 350Mb to 1Gb service and a new new Hub 4. Unfortunately whilst downloads went from 350 to 780 the uploads actually fell from a fairly stable 40 Mbs to 10-20 Mbs which now causes problems for the 4 of us given all the new whiteboards and video calls going on with schools and my work.  Ideally I'd like the full download bandwidth as well but the immediate issue is the poor upload.

Hub 4 has been reset a few times - full 60 sec hold down plus wait for it to reboot on it's own.

All the filters/attenuators etc are finger tight or tighter but there are quite a few in a row.

I've run Google's speedtest and Okla's Speedtest via ethernet cables and both report similar speeds at several differing times of the day and night (with everyone else disconnected). When I do the testing I drop everything else from the network so they don't use bandwidth. Here's an example although upload has been as high as 20 Mbps. 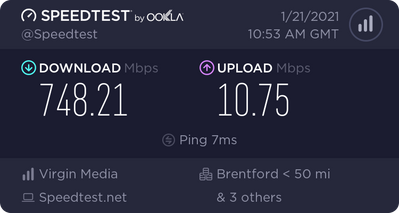 At the moment its in Modem mode connected to an Asus ZenWifi XT 8 which then goes into switch to supply the house and can't do much since classes are going and I have some conf calls soon.

Grateful for any help you can give...I think it might need an engineer to have a look at the line and/or Hub 4 as I'm not sure what else I can do here

Here's the downstream page (my chanel width seems lower than others I've seen and the PLC power seems higher):

This is the first time I've seem all 64QAM in the modulation column rows. Until now there's one that is 32QAM and one that is 16QAM.

Please let me know if there's some infor you might need to help uncover whats happening.

If the upstream modulation (QAM) is dropping back, that's often an indication of an upstream noise problem, and can explain slow speeds (and any disconnects or slowdowns on the downstream).  Keep an eye on it, and see if you can get a record of the modulation falling back, and then post that, it'll help the forum staff book a technician, but the policy appears to be not to send a technician unless there's clear evidence of a fault.

One less welcome possibility is that you're just suffering because the local network is struggling with upstream capacity due to all the home working/learning as a result of Covid.  On the basis that you want your 1 Gbps connection and Openreach is not an option you'd consider, then if this is the case then the solution is probably waiting for the world to return to normal.  Setup a BQM, that'll show what's going on with your VM connection.  Post a link to a live, shared graph here and we'll see what's happening.  Usually needs to run for 24 hours before we can draw reasonable conclusions, but the live graph will continuously update so you can do that immediately.

Thank for the reply Andruser

I'll keep an eye on that QAM things to see if I can capture it at less than 64 for each.

Whats weird is the upload being so low having been happily at 30-40Mpbs via the Hub 3 until the Hub 4 was installed. Now I'm at 10-20Mbs which causes issues of course for the various conf calls going on during the waking hours.

Here's my BQM I only just turned in 'Respond to ICMP...' so might have packet loss early on

Was there anything else that stood out on the logs?

I've read through other logs for people in a similarish situation and what members have said. I've noticed that the power levels are high @ 9.1 and the channel bandwdith seems lower at 86 vs 96 I've seen in others reporting issues...

I would love for it to just once hit ~50-60 Mbps upload (and 1Gbps download) say @ 3am so that I know it's just congestion keeping is lower but that has yet to happen and unfortunately my Hub 4 is stubbornly stuck in the 10-20 Mbps upload range which is half what I was getting 24 hours earlier with the Hub 3.

Unfortunely the installer had to rush to another job (I'm sure it was a super busy day) so stayed only until it was activated and connected but didn't get a chance to run any performance tests. I wish he'd had the time to check the logs and line settings so I could at least get similar upload speeds to what I just had.

Speak of the devil.

That's excellent news!  Well, not quite, but what I mean is that there's now something tangibly wrong with the connection and the forum team (who I've alerted to this) can advise what happens next to see this resolved.  It is still possible that there might be a utilisation fault, but as above, if you want 1 Gbps you'd have to sit that out, and from the few hours of BQM it's too early to say.

On power levels and other stats, other than the upstream modulation, I'm not seeing anything that would necessarily cause a problem in the figures you posted earlier.  Although we forum amateurs work on some rules of thumb over power levels and the like, the tolerance built in to the standards is large, so "reading the entrails" is more art than science.  But the helpful forum staff can give them the once over, and if a technician is needed they should sort them out.  A technician visit won't resolve a utilisation issue, but I can't say that there is one here yet anyway. 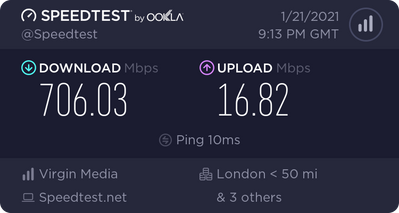 Still I'm glad theres some sort of physical manifestation and I'm grateful you've taken the time to look into this, Andruser. I'll post new figures in the morning then just wait.

I'm not going to keep spamming so this will will be the last log report until I'm asked something...  I just checked as assuming reduced congestion and now the Upstream report says 16, 32, 32 and 16 on the modulation side. Current speed is 750 Down and 15 Up via Okla and Google  - I don't imagine there's a lot conf calls going on at midnight...Maybe it's the box...