As far as I am aware the tablets where designed by a third party. Also as this is a software issue the company that designed them is not liable for replacements or repairs as it is the Software Providers issues (VM).

The other issue is that as all Virgin Media Telly Tablets are on Android 7.0 which also hasn't had a Security patch update for quite some time this leaves it vulnerable to virus attacks. Due to an update from VM sadly this has exposed one of these vulnerabilities.

Also to clarify a comment I seen in an earlier post the Telly Tablets purchased are not sold this way with viruses pre-installed. If this was the case no one would have one. 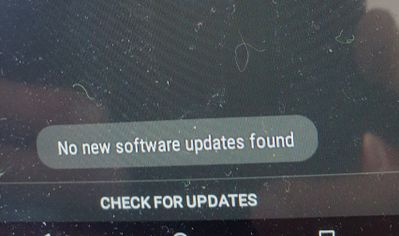 After being passed from piller to post on the phone then to be told basically that nothing will be done and nothing can be done by Virgin Media technical team.

And to basically be made out to be a fool by being told that the updates are not done by the provider(s) when they are is extremely insulting. I have studied IT for years and have a vast amount of experience and qualifications. I have my own business and if I acted like this to one of my clients I'd loose business.

Whether the tablets are out of warranty or not it is still the responsibility of Virgin Media as the software provider to maintain and service it. Exertis deal with the hardware side of it. As this is a software issue caused by VM it is their responsibility to fix it.

For the amount of people having this issue it is absolutely appalling.

It would seem to me that this issue is far more widespread than I originally imagined and add to the fact, that the security issues alone should have the tech team at VM chomping at the proverbial bit but to mine and I'm sure many others disappointment, nothing seems to have been rectified. Perhaps a legal perspective may be needed here, especially, as like I said previously, it's only a matter of time before someone's accounts be it financial or personal is compromised. I am not sure that I am willing to take the risk and still use the tablet in good faith. Although, I am not even sure if I have enough 'good faith' left where VM are concerned.

The legal angle deserves a little more investigation one thinks at least then we will know where we stand?

Unfortunately not at this time. I would check back in about 3-4 years, prehaps by then there maybe a permanent solution or at least we would have saved up enough money to buy an iPad lol

Well, just got off another call. Lady told me it was an app I'd downloaded. I tried to explain to her in simple terms as she wasn't part of the tech team it turns out. But she assured me it's an app I downloaded, I assured her it wasn't.

Funny how my partner was having issues with his all of a sudden after Easter, he was trying to download Disney plus but it wasn't showing in his appstore, we put our devices together so I could look into it as I have more knowhow than he does. I noticed whilst I was looking around that my android version was older than his and required an update, I updated as normal just because I hadn't done so yet, and bam, issues and malware ever since.

Yet I still apparenty downloaded an app to cause it.

A quick google search of the Malware in question would have led her to all the Gigaset issues also. Which oh look, come from the system updater. It's like banging your head against a brick wall. I'm not looking forward to the tech team convo tomorrow, (After our 40 minute discussion she tells me they are closed now) probably the same outcome, yet again!

If Gigaset can roll out a fix, why can't bloomin VM.

They've already got your money, so they won't do anything. The fact that Virgin continually increase their prices and don't tell you when you're out of contract, should tell you that they really don't care. They want your loyalty, but you won't get theirs.

It looks like the quick fix I've done will become a long fix, until they sort it out. That'll be another year then.

All I did was reset my device, left it on all night (I probably slept off) and in the morning it was all back to normal.

Below are details of my device (sorry I am not technical), I only use this device to watch NBA games.

Hope this works for y'all.