Anyone who uses the internet wants to be assured that their data is secure and being handled responsibly.

On Sunday (31/10/21) I found a problem with my account. When I sign in, sometimes my account name is shown correctly as "Jean-Paul" and sometimes it's "Jackie". Clearly this is concerning. So I contacted Virgin via WhatsApp (which is an epic story in itself) to share screenshots showing the problem.

Addressed as "Jackie" in the chat, I was told that the IT team would take 3-5 working days to fix the "glitch"! Not very reassuring.

Virgin didn't take my concern about fraud and data security very seriously. After over an hour of back and forth and round in circles on WhatsApp I rang them to see if there was anyone who could think independently outside of a script.

Again, I was told the IT team worked office hours and not weekends and the complaint had been passed to the fraud team to investigate. I pointed out that fraud is a 24/7 activity and I really need to know what action Virgin are taking to ensure that my account and data are secure.

After another round on WhatsApp on Monday I was promised that someone would get back to me within 72 hours … and guess what? No response.

So the only clear answer I've had is that Virgin would do nothing until Monday morning and that I won't know what they did, if anything, until maybe Friday. They didn't even offer any advice on what I could do to secure my account.

I've changed my passwords, but "Jackie" is still there.

In the meantime, all I can do is hope and pray that "Jackie" is just a "glitch". Easily fixed, apparently, but just not in the evening … or Saturdays … or Sundays … or any time soon.

Virgin, the way you're dealt with this has been pathetic. A new low in customer service even by your standards. So thanks for nothing — I've reported you to the Information Commissioner's Office and raised a formal complaint. 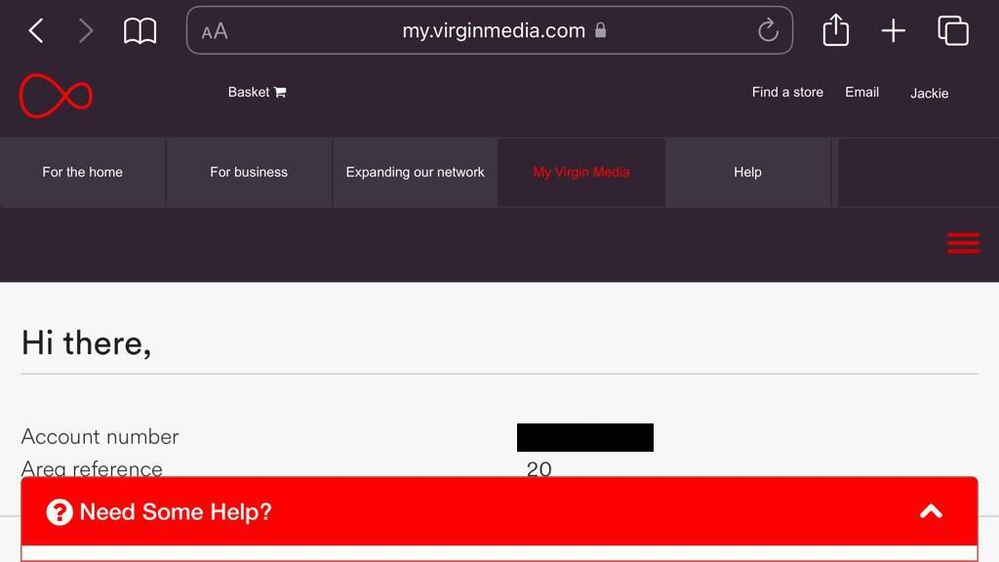 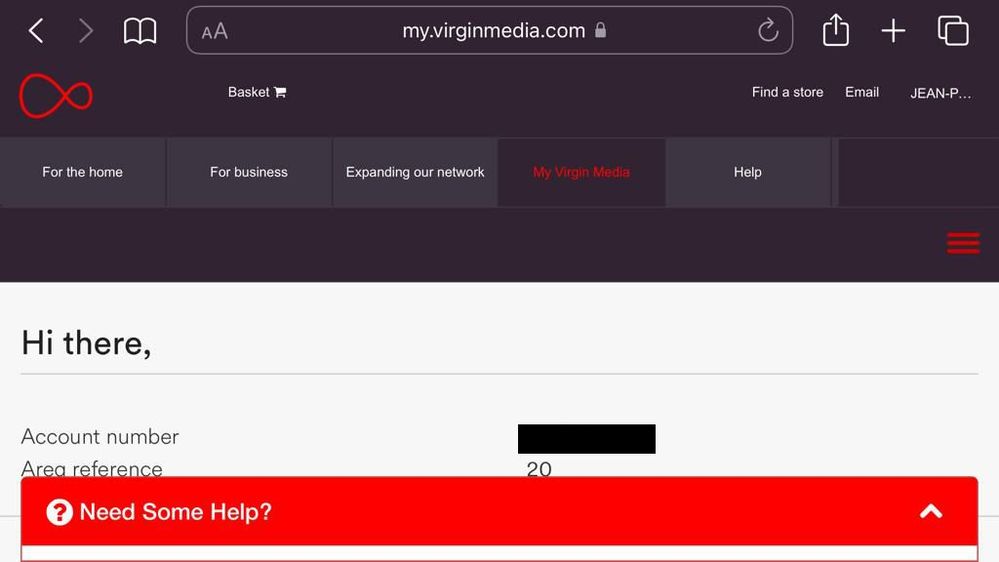 Welcome back to our Community Forums! Thank you for your post and I'm sorry to hear that you're experiencing some ongoing issues with your services!

We understand that this must be very frustrating and worrying for you in this situation. Apologies that you're having to experience this. I was able to locate your account and I can see that the IT team is working on your ticket as fast as they can. At the moment, it does look like a glitch, as the name listed on your account matches yours. It's great to know that you have reset your passwords for your own security.

Please keep an eye on this glitch and keep us updated on how you're getting on.

We will be able to update you further on this when we can.

Thanks for getting back to me.

The name on my account is not correct. It still says Jackie when I sign in via browser on a mobile device 6 days after I alerted VM to the problem.

If you logged into any of your online accounts, bank, Amazon, Virgin Media etc, would you feel safe and secure if it displayed the wrong user name when you signed in?

You certainly wouldn't dismiss it as a glitch.

Hi JPL8, thanks for the message as the 3-5 working days are now up would you be able to change the password for the online account and then log in again and confirm if this issue still persists. If you are still getting the same issue we will be able to look in to this further for you. - Chris. 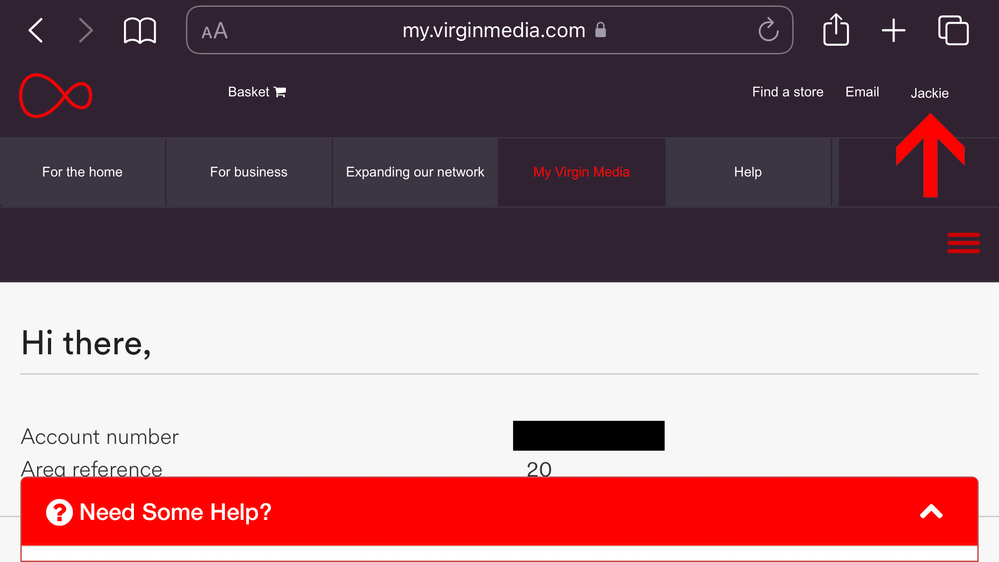 I have an issue where my account name is sometimes displayed as someone else's name and have exactly the same problem getting anyone at VM to take it seriously. It keeps getting described as a "glitch" that's "easily fixed", but six days later it's still not been sorted out. The WhatsApp support even addressed me by the other person's name!

Your bank or any other online account that you rely on would get straight on the problem, secure the account for you and fix it, but that seems to be a bit of a stretch for VM.

I've made a complaint about them to the Information Commissioner's Office "about the way an organisation has handled your personal information, including if the information is wrong, the organisation have lost it, or shared it with someone else": https://ico.org.uk/make-a-complaint/your-personal-information-concerns/

I know this is fixing the symptom not the cause of the problem but are you aware that you can edit that "Display name" in your "My Virgin Media" account under the "My Profile* tab?

Presumably the Display Name on this screen in your account is currently  showing "Jackie"? If it's not then something really odd is going on. 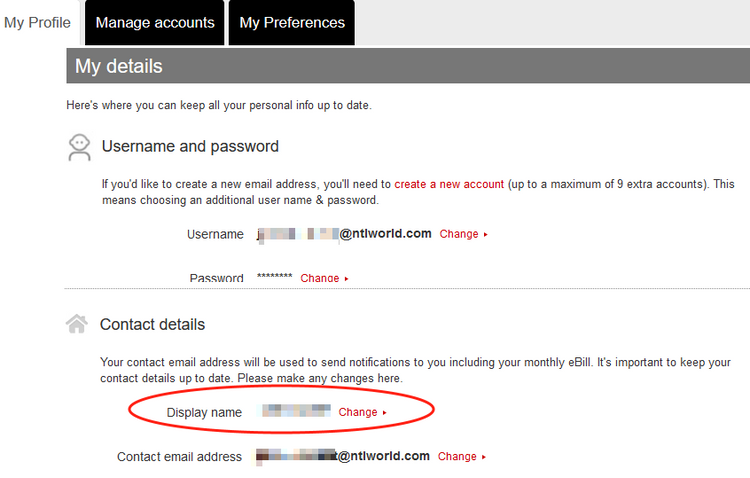 I have no idea how that could be changed other than by some-one hacking into your My Virgin Media account so changing your security questions as well as changing your password would seem appropriate.😉

The display name is always correct in that section, however it’s the sign in name that’s wrong when I log in on mobile versions of the My Virgin Media website.

I’ve changed my password twice now, but it doesn’t make any difference.

If I had to guess what the problem is, I’d say it’s the HTML code for the display name when signed in on mobile (doesn’t happen on desktop) — but without a thorough investigation by VM I don’t want to take a chance with my online security based on that assumption. And I can’t understand why VM are happy to risk my security by taking so long to investigate and fix the problem.

Ok, I misunderstood what was happening. 😕 Apologies.

The reason I posted was because several years ago, the display name in my Virgin Account changed for some reason. To be honest I did not contact VM about it at the time, I just changed it back again.  I did change my password and security question though to deter the hackers..

I completely understand your concern, it's strange though that I cannot remember seeing any other reports of that on the forum. It's also strange where the name "Jackie" comes from.

I hope you get a definite answer to this issue.

No worries. At least you made some practical suggestions. I’ve had hours of back and forth with VM regarding this by phone and WhatsApp and they’ve never managed anything more than suggesting a password change.

We’re beginning the process of moving our email accounts away from VM so we’re in a good place to terminate our contract in a few months time.