unlimited-ducks
Joining in
1,430 Views
Message 1 of 6
Flag for a moderator

I've received an email after having recently called 0345 454 1111 and getting transferred to a different team sign up to some offers for my new house I'm moving into, and I'm not sure if this is a correct email address from virgin media?

furthermore the virginmediao2 website which I found here (https://news.virginmediao2.co.uk/ ) was URL blacklisted and when ran through virus total came up flagged by 4 security vendors.

in short, have I accidentally giving out my details to a random company/guy or is this all official?

thanks in advance c:

Issue has been flagged to the forum team; be aware it can take them a few hours / days to respond.

AFAICS the domain virginmediao2.co.uk is registered with and controlled by Virgin Media:

Though the domain was blocked by Web Safe in July 2021 that is no longer the case. The VirusTotal listings are likely due to how those security vendors clear previously flagged sites.

Corey_C
Moderator
1,340 Views
Message 3 of 6
Flag for a moderator

Thanks for your post and for reaching out to the Community Forums, unlimited-ducks,

HughJarsse
Knows their stuff
1,311 Views
Message 4 of 6
Flag for a moderator 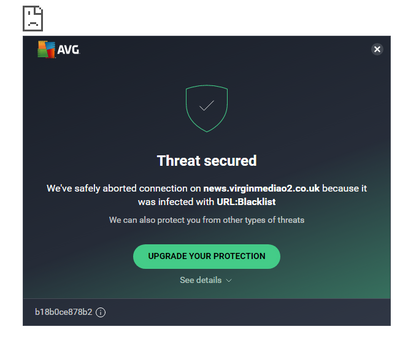 -tony-
Alessandro Volta
1,300 Views
Message 5 of 6
Flag for a moderator

You're not missing out on much. It's just a generic corporate landing page full of self-appreciating debatable phrases like:

"We’re a customer-first organisation", Surely they are a profit first organisation because I've been waiting for a new modem for months. they are just regurgitating old modems and double charging people £35 for old modems that have already been paid for by other customers trying to maximise profits instead of ordering new modems for customers.

"We have 47 million UK connections" - Lets not forget the backlog of customers who are not connected due to broken connections as evident on these forums.

"We employ around 18,000 people" - Many of whom cannot do anything at all. 99% of the telephone representatives have absolutely no clue about how the internet even works! And this is a well known fact on these forums, many people complaining about VM employees having no clue and the UK's DOCSIS network is just barely running. I spoke to Three employees who weren't even authorised to send me two return packs for two modems, so useless in even the most basic administrative tasks. I've had engineers come to my house and refuse to do work because the wires in the green cabinet were too messy and I would have to request another engineer.

So yeah it's mostly debatable stuff on that website, not surprised your AV has flagged it, your AV has saved you from a pointless website.