jjdunning
Tuning in
3,859 Views
Message 1 of 16
Flag for a moderator

1) I would like to know how the scammers got my phone number – it is clearly triggered by having been in contact with you on the phone, so your security must be terrible.

2) I'd like to know why there are posts on your forums dating from January of this year where people are flagging this issue, and yet the text scam is still active? Please tell me what you're doing about this. I gave them the first three letters of my password (in a process that is very similar to your real security checks on the phone).

3) Why hasn't there been any warning of the scam sent to users?

I only wanted to change an engineer's appointment time. If there was a more direct and simple way to contact you via your site do this, then I wouldn't even have needed to ring you up.

To be honest, I'm beginning to think that everything I heard about VM before joining was true. Starting to wish I hadn't given you the benefit of the doubt when signing up.

They should care and should add a permanent block on this number and/or the supplier of the number IF it's a scam.

They should also be pushing this to the police (as some claim to have fallen for said scam), but none supply any real details.

Then yet, there are only 3 forum post (before yours, on this forum), two people say the number seems legit, the 3rd doesn't but they do admit they had issues and contacted VM .

Personally I would not respond to it, or answer calls from said number.

Virgin are HORRIBLY bad at keeping track of their own phone numbers used, they outsource so much of their phone services that the staff generally don't know who is who.  I have had phone calls in the past from "Virgin" staff and only after weeks of someone digging around can they confirm that the number was legit.  I dare say that this number is likely to be legit, but I WOULD NOT use it.  As you point out, you received a message/call from it after having contact with them on the phone.

As for a more general rule when it comes to scamming.  Phone providers generally don't block scams (even if it's against their customers stealing their customer data), and it's easy to know who your phone line belongs to.

Google doesn't have enough complaints from said number to make me think it's a big scam, but as I say, I WOULD NOT use it even tho I imagine it's legit.

jjdunning
Tuning in
3,812 Views
Message 3 of 16
Flag for a moderator

I spoke to VM on the phone regarding an ongoing broadband outage issue. We made an appointment for an engineer to come.

(During this, they asked for proof of identity in the form of three characters from my password – as I have changed my password since the time of installation, my answer was no good to them. For some reason they don't have the updated password? What's the point!)

After the call, they followed up with a text message that appeared on my phone as being from 'VirginMedia', to confirm the visit.

I subsequently had the below text messages from 07445576718, saying they needed to talk to me about the installation. It's not an installation.

The texts have errors in them – quote marks, typos, letters in the wrong case – which make them look like they're a scam.

There were also long pauses between messages – it took 90 mins for me to get a reply to the first text.

The text service had no clear end – even the scammer (or VM contact?!) didn't seem to know whether the chat was over or not...

Messages had clumsy formatting, which made me doubt their authenticity. 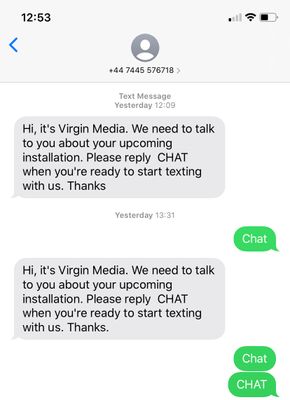 First message was not an immediate response, I wondered if my message had been delivered, and in the right format (was it supposed to be in caps?)

I also then got a new router in the post that I didn't know was coming. Or why. I assume it's so they can replace mine if it's broken, once they actually come to inspect my faulty broadband, but that's not been communicated to me.

After all this happened, I tried Googling 07445576718 and found the forum posts. I didn't know the forum even existed before... and as you seemed to imply, it's a place of conjecture rather than actual definitive information on this topic.

I messaged one of the moderators who has been responsive on this issue previously in the forum and she told me that the number is a scam.

Despite this, as there are conflicting posts, I think I'd like to get clarity on whether that's true or not!

Hope this is helpful to whoever reads it so they can take a look at their services and the platform as a whole...

MikeRobbo
Alessandro Volta
3,807 Views
Message 4 of 16
Flag for a moderator

If you are in doubt take some responsibility and block the number.

jjdunning
Tuning in
3,794 Views
Message 5 of 16
Flag for a moderator

I could do that and not say anything. The majority of people wouldn't do that – they'd assume it was legit and go ahead.

Mentioning it on here could help some other people who may be suspicious.

VMCopperUser
Trouble shooter
3,736 Views
Message 6 of 16
Flag for a moderator

The amount of poor English in the text they sent you is staggering.  It might be an AI that your talking to, but some phone reps I speak to are not well versed in English and you get things like that (I reported a broken BT ground access cover last week, that was painful).

Freshdesk / Zendesk / Liveperson / Liveagent / Plus the other various two dozen ones I know of all suffer the same problems (some worse than others).  It can be bad as agents can be working tons of different companies and as such your query can seem odd as the answers vary from one company to another.  I honestly wouldn't be giving too much info over text, sadly companies have used Covid19 as a wonderful umbrella to hide the migration to these poor phone support providers.

The fact that you seem to be getting support mixed with these utterly poor SMS messages makes me think it's legit and just a horrible non English fluent agent.  The AI Freshdesk chat isn't too bad last time I had a conversation on there, in fact, you could tell when the AI quit and it was transferred to a person, as the overall language became quite poor (but not nearly as poor as what you're showing).

In the text message it hides the URL (or you hid it?) as there should have been a random string behind the ts.idavid.liveperson.net.  The URL breaks down as follows, the TS means "Technical Services", the "iDavid" part is the user verification server, then it's liveperson.net, and after that should have been a random ID (that only last for about 1 hour).  I have seen a helpdesk hide URL's before, but not all of them do it (I hate it when they do), I don't think they should because it looks more scam/phishy than being open up front.

I think it's legit, but I think it's poor (That "Agent" should be reported and removed - tho they will be back next week with a new name lol).

https://www.virginmedia.com/help/virgin-media-manage-engineer-appointment Might help with your original query, but only if you have managed to create a account.  I will admit I have not used the web system to book or change an appointment, but I am under the impression that it allows you to change slots via the website.  Someone else should let us know Please!

----
I do not work for VM, but I would. It is just a Job.
Most things I say I make up and sometimes it's useful, don't be mean if it's wrong.
I would also make websites for them, because the job never seems to require the website to work.
1 Kudo
Reply

I've also received texts from this number in relation to installation: 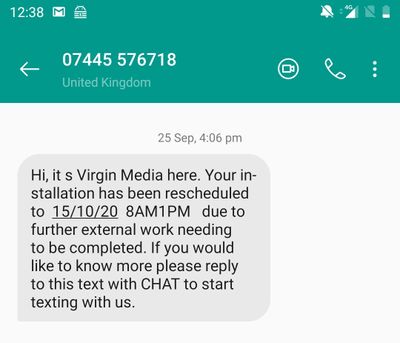 It seems genuine to me given the installation was rescheduled. If it isn't genuine then Virgin Media are somehow leaking this information to scammers.. the ICO won't be impressed by that.

jjdunning
Tuning in
3,548 Views
Message 8 of 16
Flag for a moderator

This was really helpful, thanks.

I typed “rearrange engineer visit” and variations on that into the search bar on this site and didn’t get a useful result. Would absolutely have used that if I had found it... oh well.

Sounds like the number I started this thread about may be legit after all, but it’s so confusing when it really looks like spam, and when an actual VM moderator tells you it’s a scam.

They really need to sort it out...

Thanks for your posts regarding this number.

I can confirm that this is a legitimate Virgin Media number and is used regarding installation/service issues etc.

When you go through to speak to one of our team via the 'Chat', this is then logged on your account so any one else you speak to is able to see that you've talked with us.

Apologies for any conflicting information. I do hope this clears things up.