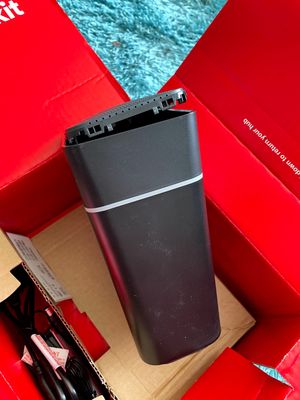 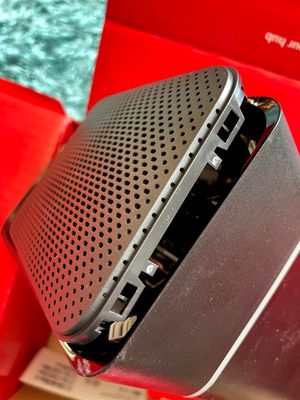 It's astounding how this company is still in business. I'd like to day I'm surprised, but I've been unfortunate enough to have a few deliveries before that have arrived in a similar state. Clearly Yodel offer the cheapest business solutions, but surely this is quickly outweighed by the amount of damages and peed off customers? The Virgin advisor I spoke to wasn't the slightest bit surprised either and had a replacement ordered within minutes. I did ask if the replacement would be shipped by Yodel again, to which she sadly sighed Yes, then advised should it also arrive damaged to call back again. 😩

Maybe Virgin media needs to start packing them in something a bit more robust?

Forgot to ask, what happens to this current damaged modem? I had no instructions as to how to return it, will the Yodel driver be taking this one back or will a seperate collection be arranged?

The levels of incompetence at VM is truely staggering!

So yesterday I posted a picture of my new Hub4 which arrived in the post with the top of the modem broken off. No surprise there as the chosen courier is Yodel, the fact that anything turned up at all was a shock.

Well in typical VM fashion, things haven't improved and are slowly getting worse.

Upon opening the box and seeing the damage I immediately phoned and spoke to an advisor, who didn't seem fazed and promised I would have a replacement within 24 hours. She informed me that I would receive an email confirmation and a text message with a delivery time later that evening.

That didn't happen, so first thing this morning I hopped on the online chat to see if there were any updates. The online chat informed me that the reason I'd not been contacted was because no order had been placed. (no surprise there!) but would raise another order and guaranteed that a replacement would still be with me today. I replied that I found this highly unlikely as the original order was a few days in the post. The online agent then decided that in order to get me online today an engineer would call and fit the modem instead. Cue several messages from me saying I didn't need an engineer, just a replacement modem. Finally the agent came back and informed me that an installer would only be available next week. The installer I didn't ask for?? Fine, put it in the post then. But this genius then decides that they will book with a different team, who deal with faults to bring a replacement instead and swap it out on the doorstep. Fine, whatever I'm at work now & getting a bit fed up. Again I was told to keep an eye on the app & look out for an email and text message.

Obviously nothing turned up, so when I returned home I decided to try calling up again to see if there were any updates. As soon as the advisor looked at my account he said "ORDER REFUSED, ORDER REFUSED" over and over before putting me on hold. After close to half an hour with him occasionally popping back to apologise for the delay, he informed me that no orders could be raised on my account. The reason being is that my original modem had been logged as "Lost/Stolen '' instead of damaged or faulty. Obviously it was received and signed for, so now my account has been flagged for possible fraudulent activities by trying to obtain multiple devices.

Eventually the phone advisor told me that all the previous errors had been removed and my faulty order had been escalated to ensure that I would have a replacement modem tomorrow. I told him I don't expect it to arrive at all, so to expect another call from me in a few days to cancel the upgrade or perhaps even the whole service.

If any advisors here can confirm via DM that if/when anything is due to be delivered, then I would be most greatful. Although I really can't see it happening.

Off we go again, another day, another load of empty promises and outright lies by this shoddy company.

As expected anothing turned up again.

Another morning spent on the online chat explaining the whole thing ver and over again. After about another als hour of chatting, I was advised that they could place a new order for a modem to be shipped out in the post in the next 5-10 working days. I asked why I had been lied to yet again. So in a desperate attempt to end the coversation the advisor told me it had been again escallated to a manager and an installer would be delivering a modem to my house before 8:00pm.

I told them that I didn't believe that was true, as I now know for a fact that no deliveries are being made by "installers in the area" obviously they are too busy dealing with the many faults to spend any time driving round dropping off boxes. But the advisor insisted that the new modem would definitely 100% be with me by 8:00pm today. I told them that I would rather just cancel the order, but they insisted there was no need as it was definitely turn up today.

Well it's now almost 10:00pm and I've just got off the phone with customer services, who informed me that the order raised had been rejected yet again and it was my fault for refusing the original delivery and sending it back!

I mean seriously, do you people not talk to each other? obviously the phone and online chat covnersations are either not logged, or nobody bothers to read them.

I'm fed up of the incompetence and downright lies and stupidity.

As of wriring this update, 61 people have viewed this post, yet not one vergin rep has had the balls to reply. Pretty much sums up this whole shambolic company!

First thing tomorrow morning will be by last call, to the cancellations team, to finally put an end to this circus.

I feel your pain, I have been lied to on many many occasions too.

Also, VM has a shortage of modems at the moment, I've been waiting months for a new modem every other ISP has given me a brand new modem but Virgin gave me an old customer return, no idea when any new stock will arrive. Maybe that's why they said an engineer will bring the modem to you? Perhaps they were hoping an engineer might be disconnecting someone's services and could just pass on their old modem to you by 8pm.

Thanks for the reply, that's actually the most informative response I've had all week.

Obviously customer services aren't aware of this problem, so whenever they raise a request for a replacment modem the install team must be thinking "Are you mad? we don't have any" which would explain all my deleted orders.

Yes we can only assume what's happening behind the scenes at VM customer services. There is almost never any explanation as to why basic administrative tasks often go completely pear shaped, so we are only left to piece together the information we have and reach our own conclusions.

If I was head of Customer Service I would have established a solid mechanism for dealing with modems damaged by courier. I would have a mechanism in place where it would only need a 1 minute phone call to have a replacement on the way with fully automated sending of a new tracking number to the customer so they can track it for themselves.

Unfortunately if you look at VM's leaders here: https://news.virginmediao2.co.uk/leadership/

There is no Leader of Customer Services. This is probably why customer services is so poor.

Hi vikingbeard, thanks for the message. We are sorry to hear that you have had an issue with the router and this is not the experience which we want you to have with us. Can you confirm if you have managed to speak to us since Saturday? if so, what was advised?. Have we now managed to arrange for an engineer?, ^Chris

@asim18  Unfortunately if you look at VM's leaders here: https://news.virginmediao2.co.uk/leadership/  There is no Leader of Customer Services. This is probably why customer services is so poor.

Never trust a guy with a greasy mullet.  If he can't manage his own hair, what chance a multi-billion pound company?

What do you suppose a 'Chief Digital Officer' is, or does?

Maybe he counts all the pens and pencils.