I recently took over a property with Virgin Media fitted and signed up for an account. I was sent a quickstart pack and onboxed it, but I'm looking at a different connector setup on the wallbox, than those shown in the quickstart instructions.

The instructions say that an isolator cable needs to be fitted between a connector at the base of the wall box (end with the VM logo on it) and a splitter provided in the pack. However the wall box has the cable that goes outside the house fitted at the base and a cable (going straight into the box, not via connector) at the top of the box.

Here's a picture of the box. 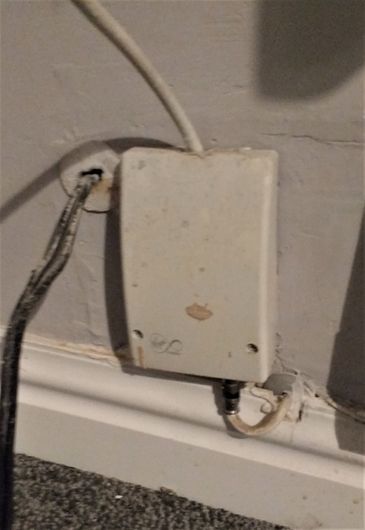 The end connector of the cable from the top of the top of the box is male, so can't be connected to the isolator cable in the pack, as that's male at both ends.

So my question is, should the cable from the top of the box be connected to the splitter instead of the supplied isolator? Sorry I don't have a picture of the connector end end of the wall box cable, but it appears to be the same as that for the supplied isolator cable. I'd take one, but I'm staying some distance from the house until I'm ready for my move in.

If the isolator cable is required, is a suitable solution to fit a female to female coupler between the cable from the box and the supplied isolator cable?

A couple such as this one.

it looks like the cable from the bottom has been routing outside wo another part of the house.

remove the cable from the bottom and connect your new cable.

Thanks for the very quick response. Understood regarding the the "home fix" issue.

The wall box is mounted in the living room, so I'd be a bit surprised if the only output from the wall box was disappearing into the wall to head to another room (bedroom maybe) and I don't remember seeing another cable/box for VM in another location in the house. That being said I've not being looking for one 🙂

However I'll try out what you've suggested when I next visit the house.

Thanks Tony, I'll take the interior of wall box photo you suggested when I next visit the house (probably tomorrow). I did suspect that the bottom cable headed outside for connection to VM's nextwork, but wasn't certain. Certainly opening the box up will help determine that.

The reason behind for me asking about the cable from the top of the wall box is that yesterday I tried it out connected to the supplied splitter, with that then  connected to the Hub 3 box, but that had strange behaviour.

Shortly after powering up, the Hub 3 box goes through a process of lighting up the various icons on the front in green, then apparently resetting, or some limited form of that. Here's a pic of the hub when at the point it appear to have finished resetting.

I connected to it using the supplied wifi credentials and initially i get a connection to the hub (obtained IP), then a "no internet" message on my device and the hub reboots.

I'd not completed the set up of the pack from Virgin (didn't get around to the TV box or phone), just the wall box to the splitter via the cable from the wall box, then the pair of Broadband cables from the splitter to the Hub 3.

So, any ideas on what might cause the constant resetting (assuming that the top cable from the wall box is a suitable connection)?

Hi once you you have set up all the other equipment, you may need to phone the activation number 0800 9539500 have your account number area code and serial numbers of the box and hub to hand. Regards Micky
0 Kudos
Reply

Thanks everyone for the suggestions, now I've got plenty of things to try out tomorrow.