No communication on day of Quickstart delivery.

So the day of my quickstart delivery has come around and it's now 10:50am and I've no idea if the parcel is coming today or not.

I've had no emails or texts or anything since the confirmation email. I don't want to just sit around all day incase it shows up.

Is there a way to track this?

Let me check into this for you

I'll send over a private message to take a few details

I ordered my Quickstart package on Thursday for delivery today.

After getting suspicious something was wrong when I hadn't heard anything by 11am, I got in touch to find out why. (Both on this forum and via live chat)

I, like many people, am working from home at the moment, and an internet connection is essential. I've had to tether my mobile at a personal cost to myself instead of using the line I ordered.

After speaking to a sympathetic sales person on the phone, it was explained to me that my order was essentially never put through properly (despite me being sent a confirmation email !!!) because the old owners of this house never closed the account.

The sales rep pointed out that someone should have called me, and frankly he sounded as frustrated by the process as I was, stating that this happens often. He said, and I quote, "I would be fuming too if it was me"

He put the order back through and assured me that as soon as the old contract owner could be contacted that my order would go through.

He also put me through to customer care who I was told would be able to offer me compensation for this ridiculous experience. Instead, once I got through to them (Offshore of course - funny how the fluent, well payed UK staff are only on the sales line isn't it) I was told nothing could be sorted until there was an account setup and I would have to talk to sales. WHO HAD JUST FORWARDED ME TO THEM.

I hung up at this point because I had work to do.

Later on, I assume the old contract holder has been contacted and the order has gone through because I received an email with my contract and another with the expected delivery time of my kit tomorrow - great news! Or so I thought.

I signed up via uswitch with a deal that is £45 a month and my confirmation email says, in no uncertain terms: "Your first payment £45" 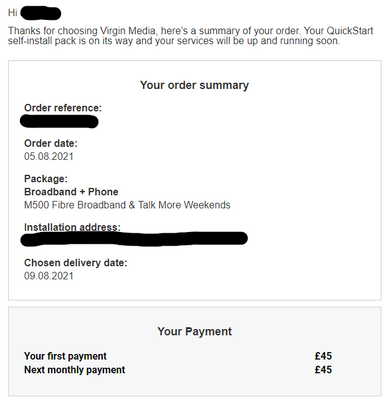 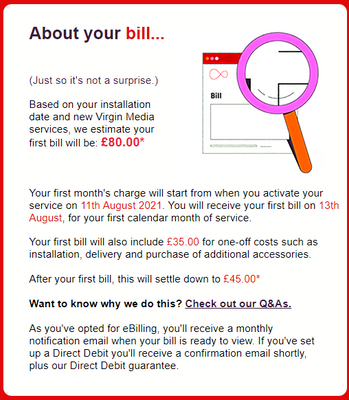 Frankly, this £35 "one off costs" is insulting even if I hadn't had to personally waste my own time chasing up my order. Especially when I'm installing the kit myself? What am I paying an unquoted
£35 for?!?!

What an awful start to being a virgin customer.

Moving house is stressful enough without having to be on the phone and having £35 nicked out of your back pocket.

I expect this cost to be removed immediately and to receive further compensation for the stress and wasted time.

Re: First bill £35 more than quoted, after terrible ordering experience!

Despite getting an email saying my quickstart package will now be coming today, I still don't have any communication from Yodel.

Looks like Virgin Media's hasn't set up the deal properly on the computer. The person who has set up this deal between uSwitch and Virgin should be contacted immediately before anyone else's first bill is incorrect.

If Virgin Media refuse to correct the charge, just wait for the direct debit to come through and then complain directly to your bank:

Re: First bill £35 more than quoted, after terrible ordering experience!

I am so sorry to see this has happened and I am so sorry that your installation is proving to be more difficult then we would like for you!

I would love to take a look at this for you and get this sorted, so I will send you a PM so we can get some details from you.

Please keep an eye out for the purple envelope in the top right corner of your screen alerting you to a new message received.