I hope the following makes sense, I'm now at the point where i don't know what to do.

Early last week i suffered an internet dropout that lasted for at appox. 6 hours, It would then come back on and then go off again during the day.

He changed my white hub 3 and changed it to the black hub and said my levels were poor but the new hub should make things better, he also pointed out that it looks like some work has taken place by another engineer at the adjacent property recently as the splitter looked shiny (it's also been left out in the open and exposed to the elements - image attached) 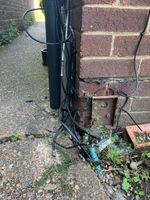 Since this happened, I've had at least 20 dropouts at different times of the day, I have called the faults line twice and was basically told that due to the upgrade works taking place, my service would keep dropping off and i would need to completely reset my hub every time to get my connection back.

When i said how ridiculous that was and i needed an engineer, i was told no because of this upgrade work. (This upgrade work doesn't appear on my service status on the website)

I've been a loyal customer with VM for many years, I really don't know what to do, I can't keep having these problems until October and nobody is willing to help.

We're being told by the Government to work from home where possible, how can i work at home when my connection isn't stable?

My internet is currently working, I just don't know for how long, Any help would be hugely appreciated.

Thank you in advance.

I've also attached network logs as i exceeded the character limit on my previous message.

I also receive the notification No ranging response received and the priority is critical many times throughout the day.

Dreadful - I will ask VM to come here and take a look.

In the meantime... If you haven’t already, set up a free and secure “Broadband Quality Monitor” to continually monitor the state of your connection and record any true network dropouts , latency issues, packet drops, etc - it will thus allow you to differentiate between those and simple wifi dropouts. It does it 24/7/365 and it keeps a visual record of any/all of your network disconnections, useful data to have to match to the Network logs (in your Hub settings) and also in discussions with VM - note it will take a few hours to start seeing a sensible picture - post up the “link” to the “share live graph” (as per instructions on the TB website) when it starts to develop.

If the engineer left it like that then he/she needs a good talking to!!!

The engineer did comment that the upstream should have 4 channels which he said he put right. I periodically check the router status and i have occasionally seen 4 channels showing, the majority of the time its just 1 or 2.

You will be seeing these broadband issues due to a Utilisation issue in your area, you may be finding that your Virgin Fibre, Virgin TV or TiVo® services are intermittent, with the picture freezing or disappearing now and then. We are sorry and our engineers are working hard to have this resolved for you.

We are planning to undertake some upgrades to support the increased demand for our services in your area. When completed, any slow broadband speeds and buffering on TiVo apps you may be experiencing (particularly at peak times) will be resolved.

As for the cabling issue, I will email your area field manager to see what we can do about this. I'll let you know once I receive a response.

Nothing to do with any area faults (think about it, this work supposedly started in Feb but you only had problems recently, and presumably every VM customer in your area has to wait until October - rubbish)! You have a bad cable joint somewhere between yourself and the street cabinet which is causing the low downstream power and corresponding high upstream power. The hub can’t reliably lock onto the (usual) four upstream channels - it keeps trying to get a stable lock and eventually gives up and resets which looks for all the world like the hub has rebooted.

Now what you need to do is to get back onto VM and tell them that you want to leave, first, however, research alternative suppliers and be prepared to go through with it. If you are still in your minimum term contract, then ask to leave without penalty, they will refuse, at which point you ask for (no, demand) a deadlock letter and tell them that you intend to escalate this to CICAS. Ideally they’ll send someone out who has an idea of what to look for.

As previously stated, i'll already be emailing the Area Field Manager around the cabling issue so we can have this investigated by some of our technicians, all information will be included in the email so the AFM can decide where to take this.

See this recent thread re. over-utilisation issues and Andrew’s comments in Message 4

Here is my BQM as requested:

I gave up trying to work from home and ended up going to the office as i don't trust my connection, It appears i haven't had many drop outs today, the rest of the data means nothing to me and any help would be appreciated.