hi,I have gig fiber broadband and I’m having problems in all online games with lag/ping causing spikes and delay.(quite severe at times almost unplayable) I have everything optimized on my pc with all the latest hardware and drivers it’s nothing to do with my system it’s all been tested throughly. I’ve been on live chat with virgin for nearly a year trying to solve it but they keep dismissing that there is a problem an they keep saying there’s nothing wrong on our side and follow the stupid reseting router method (which never fixes anything). I’ve also tested the network on modem mode with my own asus gaming router and I’ve adjusted the setting and tested it to achieve zero bufferbloat ( which I tested and achieved A+ rating) but still the same problem when online gaming. I have no problem with the speed it usually achieves around 800 Down an about 47 up on average which isn’t bad but it doesn’t matter what my speeds are it seems to something deeper causing the issues.

The speed has nothing to do with latency or ping.  Gaming needs less than 5 Mbps download, but needs low latency.  Having a better router won't improve latency in the usual circumstance where the problem is the connection to VM, because the cable technology is prone to poor latency.  A couple of diagnostic things you can try below:

1) Let's see how latency and packet loss are on your connection: Setup a BQM over at https://www.thinkbroadband.com/broadband/monitoring/quality that'll show what's going on with your VM connection.  Post a LINK to a LIVE, SHARED graph here and we'll see what's happening.  Usually needs to run for 24 hours before we can draw reasonable conclusions, but the live graph will continuously update so you can post the link immediately.

2) Connect to the hub by clicking on this link http://192.168.100.1/  That should pull up the log in page for the hub.  But don't log in, just click on the link "Check router status"  That'll bring up a window with five tabs.  Open the Downstream tab.  Select all the text (Ctrl-A if using a keyboard), copy it (Ctrl-C), then paste it (Ctrl-V) into a reply here as TEXT not screenshots.  Post that, do the same for the Upstream and Network log.  You'll get an error message when you post the Network log, just click on "post" a second time.  Then we can check for any obvious problems with power, noise or error counts.

The BQM looks good for the most part.  Minimum latency is a touch higher than usual, but only by around 3-4ms, but the yellow "DOCSIS fringe" of peak latency is very well contained. The eight hourly latency spikes I suspect are VM's not-such-a-bright-idea automatic speed tests currently being rolled out to all Hub 4 users.  That leaves a restart (?) at about 9am, and an event about 4:30pm that could be an out of sequence speed check, or a T3 timeout causing the connection to drop back.  So based on this 24 hour period I'm not seeing anything that indicates a problem.

Looking at other hub stats: Power levels all look OK (error levels aren't zero, but show as such due to shoddy hub firmware), SNR and modulation seem fine.  There's a lot more of the network log than you posted, but based on what I can see of the hub status data I don't expect there's much of interest in the remaining log data.

So.....you I'm not disputing that you may be seeing latency/ping issues, but there's nothing there that indicates a continuing problem with the VM connection.  Which leaves other options like gaming over problematic wifi, or internet traffic routing for the games you play.  If you're still having problems, and it isn't wifi then it could be poor traffic routing by VM, which happens for some games/locations/times, but sometimes the only fix is to change ISP.

Sorry I can't point the finger to an obvious and easily fixed fault.

Thanks a lot for looking into that for me,yeah it was just a router restart on them times. I agree I think it is just a routing problem to the game severs I’ve asked them about that before but they couldn’t help me. Guessing there’s nothing than can be done about that? Only other thing I can think of is changing ips to BT as I’ve seen they have better latency on there lines but I’m not confident switching atm

not sure if this is relevant but i just tried this on pingplotter and its saying i have packet loss on the first hop 9 which is my connection)? 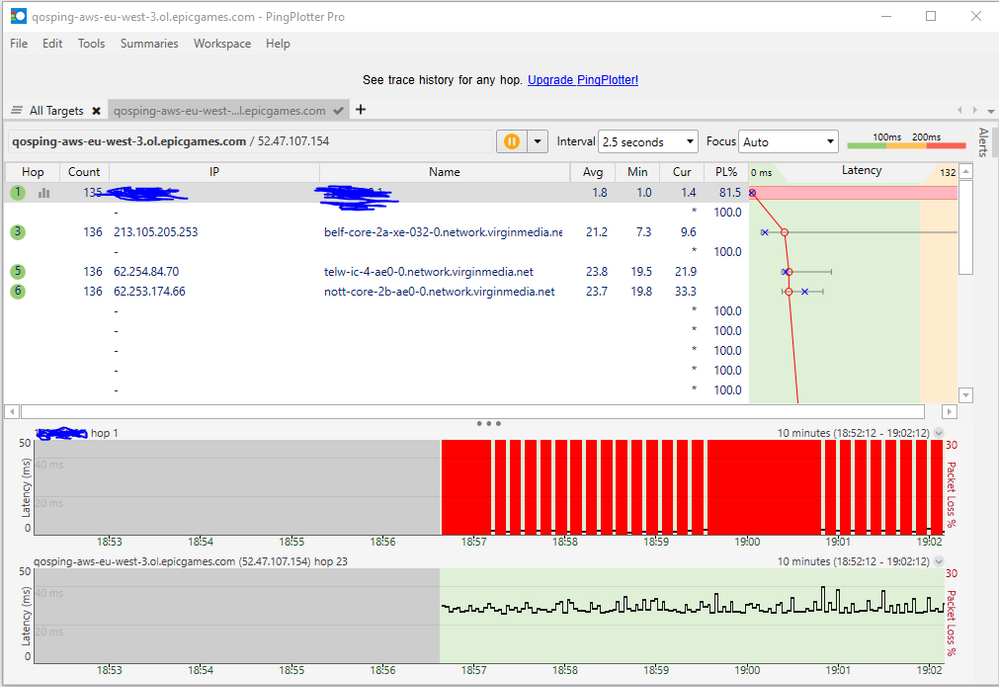