Ordered new SuperHub 3.0 and upgraded speed after  around 9/10 or so years with the previous router.

Router arrived and I set up as guide instructed before it told me to reply to a text “GO” I had received no such text and instead called the automated line to “activate the signal” waited an hour as instructed and logged into router to see “internet access denied” (see attached image).

Proceeded to search online and try a few fixes including switch between modem and router mode, hard reset the router and of course confirming the cables were attached properly with no luck.

Called support and spoke to someone who told me they had tried everything on their end and the issue would be escalated and i would receive a call within 24 hours. I have not received a call and instead called back and had a very unproductive conversation and now i’m at a loss as to what my situation is & how this can be resolved as two of us require the internet for work purposes.

Any input would be appreciated. 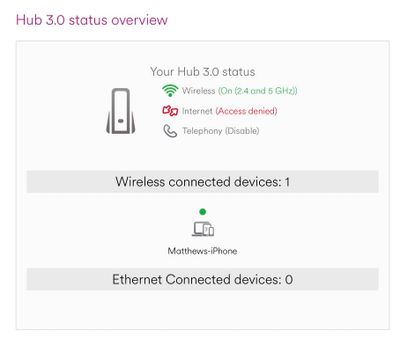 private message me and ill take a look for you

Hi @ian_41 I have exactly the same problem - I received a new superhub yesterday, connected it up and the internet would not work.

I have an engineer involved who has connected to the virgin superhub router and said that the internet has the same status as reported above - "access denied".

Would you be able to help me as well?

Also please follow forum rules and start your own thread

that should be you all up and running now

Hi Ian thanks for your reply but i’m still seeing access denied!