We received our new Gig 1 hub today and all went okay until it came to connecting our virgin landline to it which we were unable to do due to it having a standard phone plug on the end of the lead.

I rang tech support to be told that if I want to use the phone I need to go to a shop to buy a lead or an adapter to allow it to be connected even though it says in the setup guide to ude the lead provided.When I pointed this out the sdvisor went on to say that they used to supply a lead but stopped over a year ago,,,I thought that the Gig 1 hub was a new item!! , I was going to ask if I could order a replacement V6 box remote to replace our faulty one but didn't bother incase he said they've stopped suppling them aswell now.

Hopefully someone can clarify these issues for me.

Thanks for your post. Apologies for the delay in response and to hear you've been having issues with the connector for your landline and the new hub. This hub is new - I'm a little unsure as to what the agent meant to be honest.

Have you since been able to speak to the team again regarding the lead and the new remote control? If not this is something we can look in to here, just let us know and we'll go from there.

Thanks for the reply Hollie, I didn’t think it would be worth ringing back as I assumed I would probably get the same response. The issue was that I can’t connect our virgin landline to the new Gig 1 hub as the lead has a standard telephone plug on it , this is where the problem started as in the instructions it says to use the lead provided ... the agent then said “we don’t supply the leads anymore and haven’t done so for over a year and I would need to buy either a lead of an adapter from a local shop” he also said that the adapter probably wouldn’t work.I then said how can you say you haven’t supplied them for over a year if the gig 1 hub is a new item to virgin media to which he replied “I need to buy one from a shop”.

I also still need a replacement remote for one of our V6 boxes.

I'm sorry for any confusion caused regarding the Hub 4 including the telephone adapter. The type of adapter used is called an RJ45 adapter, and these can be found inexpensively online if you are still in need of one. Sadly they aren't something we provide or can send out from here.

Are you still in need of a new remote? If so I can certainly get one sent out to you.

@Beth_G are you sure about the telephone adapter on the Hub4 being RJ45. I though it was an RJ11, RJ45s are sometimes used for telephones, but it’s in offices that have been flood wired with Ethernet.

Thanks for the reply Beth , yes we still need the remote control if possible please , I've no idea what type of plug it is as it just says in the booklet to remove the one in your phone and replace it with the one supplied....the picture from the installation manual is the one I've attached 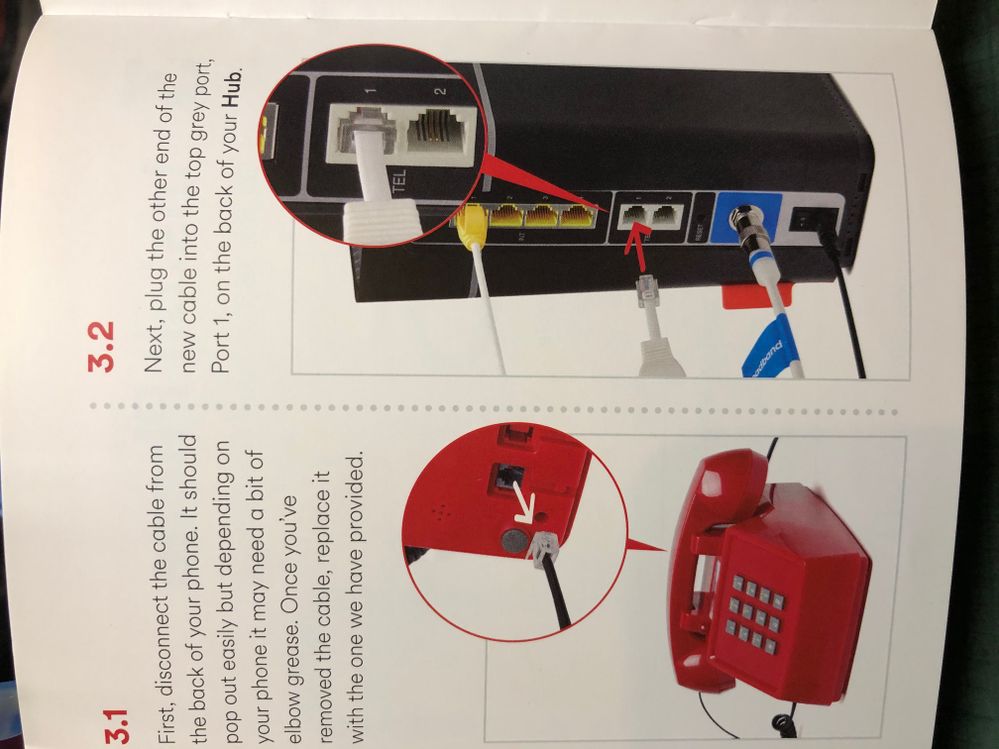 The phone socket in the picture is definitely an RJ11 socket. /

thanks for clarifying what plug it is Tudor , my main issue was that it says in the supplied Virgin institution manual to remove your own plug and replace it with the one supplied...which isn’t in the box , surely if it says SUPPLIED it doesn’t mean go out and buy one

Is this a completely new install or do you already have a phone line from Virgin Media?

New telephone installs should still get the adapter as far as I know, but if you're getting the Hub to replace an existing one then you'll keep whatever phone setup you currently have usually.

So anyone already on a Hub line will be able to reconnect to the new Hub in the same way as before. For customers with a separate physical line then you keep using that so don't need an adapter.

Thanks for clearing that up for BenMor , why couldn’t someone from Virgin simply give me that answer instead of messing me about for the last 3 weeks surely the instruction booklet should be changed so not to cause confusion ........just need to try and get a replacement remote control now!!