Had VM installed 4 months now, initial ds power levels were around +4 to +6 and then increased over time to around +6 to +10, that is until 4 days ago when there was an area outage and the whole area went off for "planned maintenance" When it did come back up originally, my power levels were around 0 to +1 which from what I understand, are perfect levels? It then went off again after an hour and came back and hasn't gone off since. The power levels are between +4 to +5.4 now and have been for a last few days. What causes the power levels, rise like they did originally to drop to 0 and then back to 4?

On the upstream side on things, pre outage I was running at between 44-46db, post outage 39-41db, which I think is okay?

Anyhow, on the back of the outage and has since been settled, even though there hasn't been any issues that I have noticed, my router pre and post error counts are massive (i've reset the router to clear them but came back) and I also have T3 timeouts in the upstream window, i've not had T3 timeouts before pre outage, and I have had a handful of PRE errors on the DS before the outage which maybe 1 post error in 4 months prior.

So yeah so if anyone could let me know about my questions above. Like I said, not noticed any untoward effects so far, just curious to know why it has done what it has done!

So the power has doubled on some channels to now what is out of spec (+10?) from what I have read, and the upstream modulation has dropped from 64qam to 16qam on 3 of channels with the other at 32qam.

Doing a speed test still shows things are fine, my upload has dropped maybe 2-3mb from 35mb to 32-33mb from but not seeing the issues people usually see when their power levels are higher than normal / upstream qam levels are low, which is a good thing, but I feel like I want to understand why, its like an itch that I need to understand these things.

Looking at the stats and the logs you seem to have quuite a number of Post RS Errors which shows as T3 errors in the log, these can be caused by noise on the which may be resolved by doing the following please go around and make sure that all coaxial connections to all VM equipment are finger tight best way to do this is too loosen the connector and re-tighten, once checked power off the hub for 30 secs and back on, then check in your downstream again if you see the Post RS rising at a large rate then only an engineer can resolve that.

Please let the forum know the results of doing the above.

My upload speed has now taken a swan dive and my upstream QAMs are all over the place, one min they will be at 64 then 32 but at the moment they are all on 16QAM and my upload is now limited to around 12mb (rather than 34-36mb), power dbm looks okay I think, so what else might it be? 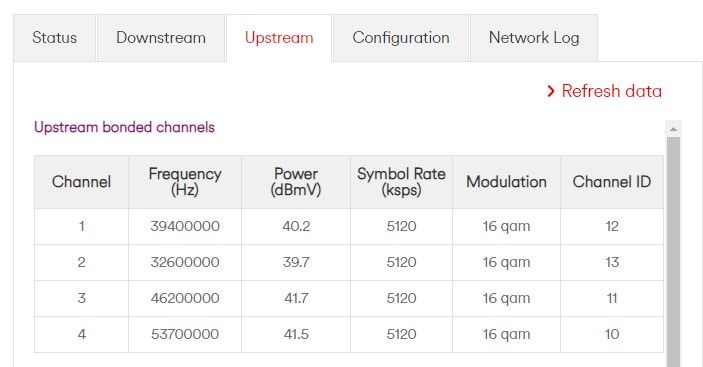 Can you set up a Broadband Quality Monitor (BQM) at thinkbroadband.com - this will give you an insight into what is happening with the signal at the other side of the Hub, it will take a few hours to get any kind of trend showing although you should post the link straight away.

Post a 'Live Link' to your BQM on here.

Under your BQM graph are two links in red.

Copy the text in the Direct Link box, beware, there may be more text than you can see.

In the URL box paste the link you copied and in the ‘text to display’ box write My BQM then click OK - you can post the link straight away.

I think the BQM will explain the Upstream QAM issues.

Setup. Its back to 64QAM now, but it will soon change again!

The fact your US jumps between 16QAM and 64QAM is most likely noise in the circuit, and the modem is dropping to 16QAM to cope.

A quiet circuit should be 64QAM ( I believe there may be some areas still on 16 x 4 QAM?, as I was until recently)

If you do as suggested and check all connections from outside to in, and they are all tight. then you will need an engineer to check the ingress and fix it.

In any case, don't over think the power levels as they also fluctuate with the outside temperature, so they are not static.

All connections are tight, the install is only 4 months old, brand new cable pull and street works to accommodate! Stats and speeds have been good until the outage the other week for the area, and now nothing is stable. How do I get an engineer out to look at the upstream QAM?

My BQM has been running for over a day now and you can see there is alot of spiky yellow! It actually went off at 00:01am this morning and required a router reboot. Stats were just as bad post reboot at 00:01am.