Daveytn
On our wavelength
1,624 Views
Message 1 of 72
Flag for a moderator

So just took out a 350 package, went with vrigin as they are the only ones to offer FTTP whereas everyone else is FTTC so I'm limited to 76Mbps via the phone line.

They have put my installation on hold now, and won't give me a date. They say it's to do with having a shared drive (fine, but no digging is needed), and they also say they are awaiting permission from the council (for what?)

All they need to do is run a new cable from the box in the ground outside my drive to my house in the existing infrastructure that supplies my neighbors. What are they talking about going on about permission etc?! They are currently saying 6-8 weeks!!

See my recent message 4 in this thread about a similar issue. They need permission from the council to dig up the steet

Daveytn
On our wavelength
1,543 Views
Message 3 of 72
Flag for a moderator

Hi thanks for your reply. I've seen your comment, and although it's very useful I have to say that there's no reason for needing to dig anything up what so ever.

Virgin media is widely available in my area, and it is installed as I mentioned in the houses either side of my own. The infrastructure, I assume pipe laid in the ground, with fibre cabling running through it, is already present. There is a large virgin media drain at the end of my driveway on the pavement, which I assume is the point they will need to run the new cable through to my property, as mentioned above, already exists the access and routing.

The only other work I can imagine they need to do, is run a fibre cable from the cabenit to above mentioned drain/box, then to my property. Litterally all of this exists already, just need to fish a cable through that is litterally it!

Theres a new company called YouFibre that is currently fishing fibres through existing infrastructure to offer their services, so why can a company like virgin media not just get on with it? Makes me laugh.

On the phone yesterday a lady offered me the ability to delay the contract to when the installation has taken place, to whic I replied 'you should be doing that anyway!'

Is there an existing duct from the Virgin Media access cover in the pavement, into your property?  If not they will need council permission to dig up the pavement to run a duct.

It doesn't always take six weeks though, some councils are much quicker.  Then Virgin's contractors will come and do the job.  However as you can see from reading down the page there are often delays for no apparent reason.  You will eventually get an estimated installation date, but don't rely on any date until the work has been done.

Daveytn
On our wavelength
1,527 Views
Message 5 of 72
Flag for a moderator

Yeah the ducting for next door runs under my garden lol.

Look how close virgin media already is to my house! So I ask again, permission to dig up what? Lol. You can see the cables coming out of the ducting! 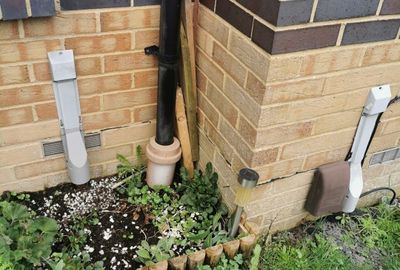 Sometimes they cannot run cable through to properties because the duct is "blocked" - they are not very wide - so the need to dig down to it the clear what is blocking it. Sometimes its old cables not in use, a collapse, or perhaps the duct is actually full of cables at some pinch point

Really sorry to hear that you're installation has been delayed. I looks as if you have already had a site surveyor out and they have concluded that the work isn't as simple as might appear. If more work is needed to provide you services then unfortunately this will cause some delay. If council permission is also needed this can cause even more delays. I understand your frustration, I will send you a PM so we can raise this further. ~CS~

Daveytn
On our wavelength
1,456 Views
Message 8 of 72
Flag for a moderator

A pair of guys came out today, totally unannounced and started digging up my garden, but a very specific area right against my house. I spoke to them when I left for work and they said they were just accessing the junction box, installed 20+ years ago when my house was built! Just like I said... Lol

Thank you for confirming that information @Daveytn.

I have updated your account with your contact details and opened that complaint for you. I'll keep an eye on the progress of the complaint. Hopefully this can all get resolved for you.

Daveytn
On our wavelength
1,341 Views
Message 10 of 72
Flag for a moderator

What am I supposed to do?

Apologies if this is the wrong area, but I'm frustrated and need to generally rant.

As soon as I completed it and chose a date, I got emailed saying they have changed it for 2 weeks later than what I chose - fine.

They then contact me to say it's on hold, for no reason at all. 2 weeks go by, se guys come out, fit a tee under my living room window, and leave a red cross on my driveway.

A week later they tell me 'the local authority permission request is back, and it's private land' - yes, it's MY driveway lol.

Now they keep saying they are awaiting the civil construction team to contact me RE: a date.

Anyway, my current provider disconnected me on the 4th of February as I requested, so I'm now without any broadband.

Virgin were good enough to send me a MiFi dongle with 'unlimited data', but I live in an area that's very well known for having next to no signal for Vodafone... The very network Virgin uses!!! Phone signal in general is poor here, so I have a mobile signal booster that... Uses broadband!

So I am without internet until they decide to get a move on, and I'm sat here like an absolute idiot telling my girlfriend 'dont worry it will be worth it, we will have mega fast internet' as we now have no internet.

Anyway the real tech part, the MiFi dongle says it's connected (to some scotch must of a signal) but every device I connect (i.e TV, hive, Xbox, mobiles, tablets, pc, mobile booster) all say "no internet access"

I have made 2 compalints now and have had absolutely no feedback. Apparently, they aren't able to offer broadband via the standard reliable old copper wires (FTTC), and when I ask about it "what do you mean, phone line?"