This year we returned with a new TV+M350+Phone Oomph bundle starting January 4. However I think we'll need help to make this contract work, especially now animals have been chewing the cable.

The QuickStart pack worked fine, to start with. However ~0-45 minutes after midnight the Hub regularly resets the cable interface, dropping us all off both wired and wireless connections. I've seen this reported in many other threads within the last year, but not with our other issues.

Combined with this, there appears to be an upstream power issue, particularly in the lower bands, resulting in T3 timeouts on most channels; 25.8Mhz is by far the worst of them.

After a reset they all move to 51dBmV power almost immediately and would go higher if they could. After reboot with one channel connected it hit 55dBmV. Often it returns with TCS partial service (three channels) for hours. When the lowest upstream channel does come back, it can get stuck on 32qam.

Downstream signal is also marginal - a few channels have hundreds or thousands of Pre RS Errors, again in the lower channels 2-8 (138-163Mhz) where RxMER (dB) has fallen below 36. Channels 2-5 are worst.

When it does work, I get full speed from the service - which is good, because we paid extra to upgrade that, and make good use of it, as shown below. The big issue is the midnight resets, which come at a busy time for us.

Looking outside, I found that animals - probably foxes, who have a den next door - chewed the exterior cables coming up the side of our drive and broke its sheath. I don't know if this causes our issues, but it probably doesn't help, and I worry it might cause noise for others. Don't really have the equipment to fix it! 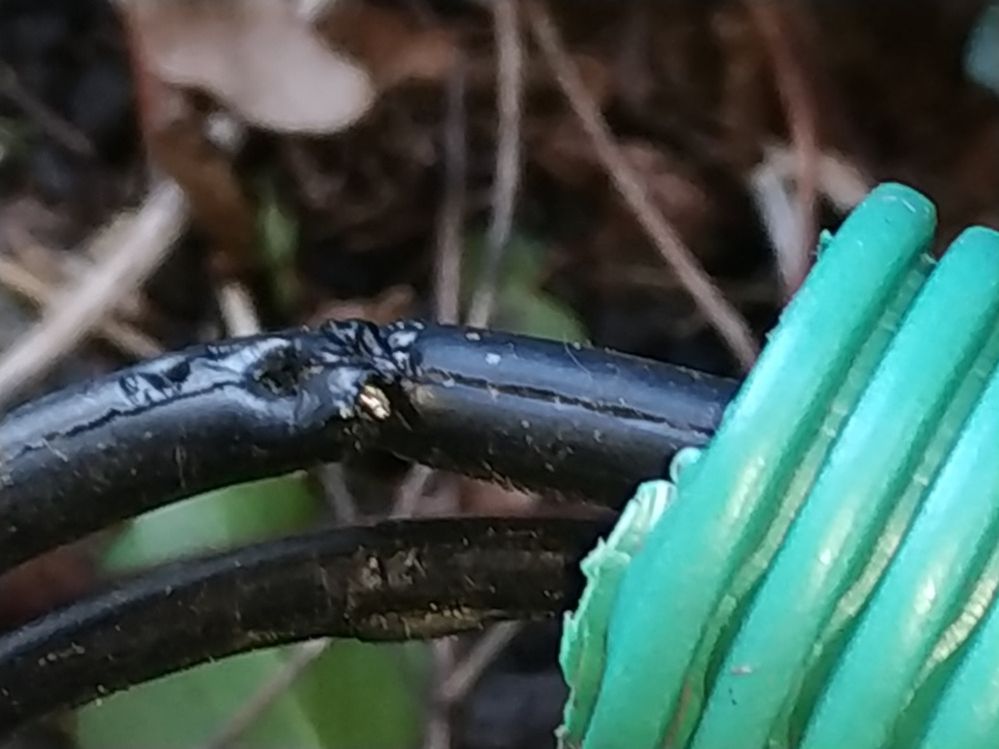 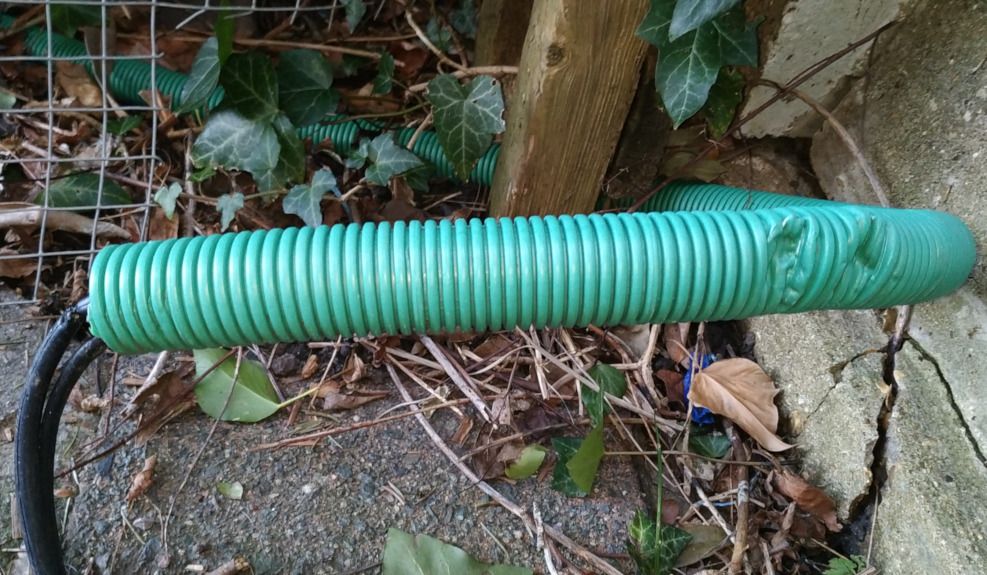 They dented the pipe, too

These cables subsequently enter an omnibox outside the front of the property and the main cable enters a 3.6dB passive splitter. One line goes to the back of the house where we previously had the TV box, while the other (and the old Virgin phone line) enters by the front door.

There is then a ~3m run of white cable extending from the front door socket, installed by a Virgin engineer when we had service with a separate phone line, and split with the new combined splitter to the Hub and the TV box. Connecting the Hub directly to the socket did not significantly alter the upstream power issues or fix the resets.

Previously our SuperHub 2ac was connected directly via the extension cable and the TV box was on a second line at the back of the house. This line still works, but is 3dB quieter. At that time downstream signal was so high the engineer fitted a 6db purple forward path attenuator (marked A1823/05R) to the 2ac. It's not on the Hub 3 because downstream levels are already ~0dB after the internal Hub/TV splitter. (I tried anyway, but it did not stop it resetting.)

The downtime is visible as a gap on my microserver's network graphs (time is CEST, so 01:00 is midnight). 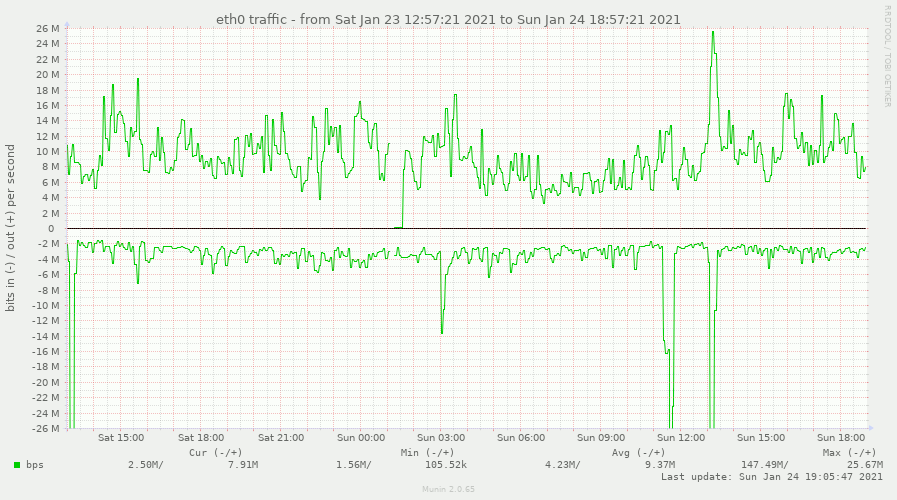 Forgot to mention: the unused line is capped at the socket. I should also note that the downstream difference varies over time, as do the channels. For example, this was the state just twenty minutes ago:

Ten minutes after these readings the interface reset, dropping all connections as usual. When service resumed ten minutes later, a new set of downstream frequencies were in use, all of which were above 200Mhz (switching out all 8 lower channels), none of which now had <0 dBmV:

The log shows the following changes (the T3 timeouts were again registered on 25.8MHz):

Yep looks like an Upstream issue - too many T3's an the power levels all at the top of the range and qam dropping. The chewed cable may be the source of the issue - but it needs VM to take a look at your connection in more detail.

Call it in and report it - try at 08.00 for the best chance of getting through quickly.

Also, in the meantime... if you haven’t already, set up a free and secure “Broadband Quality Monitor” to continually monitor the state of your connection and record any true network dropouts , latency issues, packet drops, etc - it will thus allow you to differentiate between those and simple wifi dropouts. It does it 24/7/365 and it keeps a visual record of any/all of your network disconnections, useful data to have to match to the Network logs (in your Hub settings) and also in discussions with VM - as this is the "measure" they prefer to look at.

Thanks for the reply. I have made a BQM. I doubt it will show much because downtime, while annoying, is only ~5-10min, but we'll see. To an extent, ping variation is expected given upstream usage (avg. ~8-9Mbps, as the net graph linked earlier shows, but bursting to ~18-37Mbps).