Broadband down for more than a week.

My broadband went down on Friday 28th 10.23 am. I happened to check the time because I am working from home and lost a meeting connection.

I switched to tethering my phone's connection.

At around 12.00 I ran through diagnostics and ordered a technician, being bank holiday weekend, the earliest was Monday 12.00-16.00.

Nice man turned up at 15.55 on Monday. Said there was no problem with my equipment or at the cabinet. He would order a "cable pull".

I received an email at 04.00 saying my fault had been resolved. So I called first thing to be assured that a crew would be out that day.

I received no update, so called at the end of the day. Was told that there were no notes but they had been booked again for the following day 8am-1pm.

Called after 1pm. Told the case now had notes from the Tuesday saying there was an obstruction. Raised a complaint and requested to be contacted by email.

Told that it would be referred to a construction crew and assured that I would be kept informed of progress.

Received an email saying my complaint had been closed and my fault resolved. Called to enquire. Assured the case was still open. Requested to speak to a manager. Told one would call me. No one has yet.

Called again. Told the case was still open. Requested to speak to a manager. Promised one would call me back within an hour. No one has yet.

I can only assume this keeps getting bounced back to a crew which are simply unable to do anything and not escalating it properly.

What I cannot really understand is why no one is responding to my complaints or requests for a callback from a manager.

I have tried to complain by web form from the website: 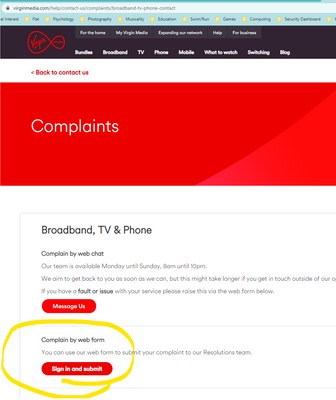 But when I click on that link it just takes me to an error page: 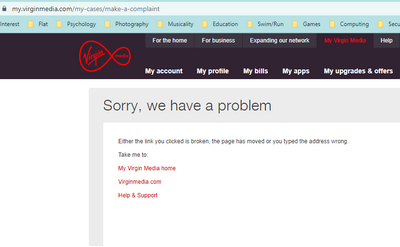 I am working from home following govt. guidelines. Wearing masks on public transport makes me extremely anxious, after a while I think I unconsciously hold my breath and start getting headaches and then start to get panic attacks.

I have upgraded my phone contract to get extra 5G data, but I am burning through it at a rate which is starting to get very expensive.

I don't think there is anything more I can easily do. Can someone please help me as I am really struggling to deal with this?

Thank you in advance.

Have spoken again to someone. They are all trying to help but cannot.

Technician due to attend today between 1pm-6pm. I have no hope that this will be any different. It's like Groundhog Day.

Have requested a callback from a manager.

Your main issue will be the blocked duct.

You could be looking at several weeks before a permit is issued. VM is a residential service, so there are no SLAs or priority access to permits.

Welcome to the Community Forums! Thanks for your first post.

I am very sorry to hear you've been affected by broadband issues for some time now and haven't been able to get this sorted any sooner. I was able to locate your account and can see that you do have a repull scheduled which is great news. Hopefully this should resolve all the issues for you.

The re-pull has been scheduled now every day for 7 days in a row.

I've sent an email over to the Area Field Manager for your postcode area and have asked if they can look into this for you. If the appointment keeps getting rescheduled for the following day, this usually means that it has not been booked in properly on our end.

As soon as I have an update on this for you, I will let  you know.

Thank you very much.

No problem peritoo, if you would ever like to request an update, please just pop back here and I'll be happy to provide you with one.

Any news from the engineers?

I've not heard back just yet I'm afraid - Area Field Managers can be heavily field based so they won't always get the chance to check their emails regularly,  but I will keep my eye out for you.