It does make me laugh when you get that recorded message, when you try to speak to someone at VM for the nth time, that the calls may be recorded to help with training and customer service quality- or some such rubbish. Judging by the number of failed install posts on here, and the fact that EVERYONE says the same thing, this customer service training clearly isn't working.

Like many others, I am really struggling with getting my VM installation done. Like a lot of the world these days, I work from home and internet is essential. We took out a Black Friday deal before moving to a new home on December 3rd, with the installation planned for December 4th.

When the engineer arrived I was told that a cable pull was needed and that he could do nothing more, and promptly left. Later that day I get the text saying my new install date is December 29th.

After the first call I was left reassured by the chap I spoke to, "that's just the worst case scenario, they give you a date way out to allow time for the engineers to do the work in the street". If only those engineers would turn up!

Since then I've had what I believe is called a "rolling appointment" where it shows I have an all day 8am-6pm job booked for the cable pull, and then nobody turns up, and then at midnight I get a new appointment for the next day. Every now and then I also get an email saying "we've had to delay your installation date because some work needs to be done in the street".

This is madness because every time you call to speak to someone, and go through numerous departments including the "pre-installation team" who are useless, they repeat the same thing. "Sorry Mr. Summers, I understand your frustration but there are 2 appointments needed for 2 teams to do the work and the first one is happening tomorrow".

No Its Not! The mysterious 3rd party contractor that VM use to dig holes never turn up. Why aren't they sacked? They are letting the company and it's customers down. Why does nobody have any information?? I wouldn't care if it was 3 months in the future - just give me a date and stick to it.

I really hope that someone from VM is on here and is reading this. I have read replies to similar posts that give me hope; that talking on here is more fruitful than trying to ring the customer service numbers. Because I am losing the will to live. If it's not a lack of information, it's being cut off mid call. Happened to me 5 times yesterday 😠

Oh and the worst part is that the Volt bundle that I was advised to take out at the same time includes an O2 contract for 18 months that I didn't need, but it was better value than lesser deals. So I have an O2 sim (that I am now paying £25 a month for), as well as my existing EE contract that I DO need, and now I have gone past the 14 day cooling off period and I'm stuck with a mobile sim and no Virgin Media. Cheers Virgin Media for stitching me up.

Does raising a complaint on the webform ever lead to anything more helpful than this rubbish ? 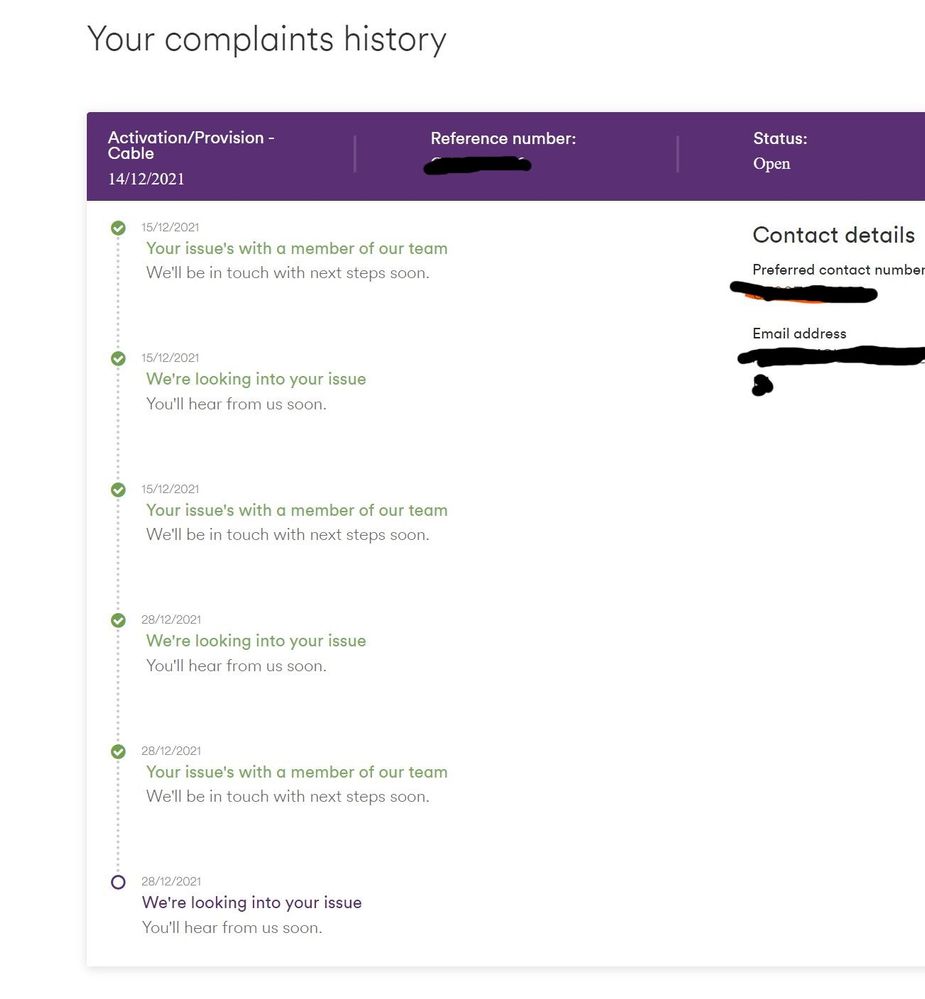 A scan of the posts in the Quicktart, New Connections & Setup forum will show that your experience is regrettably common, and this could be a short delay, it could also go on for many months.  Breaking the logjam of incompetence and misinformation appears to be impossible, even with complaints to VM, to VM's CEO, or through escalation to the industry complaints scheme CISAS.  The (known) record for delays was over 11 months, I believe that the installation was cancelled at that point.  Staff here would like to help, but don't have access to the relevant systems to find out what's actually going on, the pre-install team are clearly managed by Laurel & Hardy, and at a corporate level senior management see nothing that worries them.

It beggars belief that in this day and age a large company can be this shambolic, and I'd hope all VM staff would be embarrassed by this rolling fiasco, but there are presently no signs of any will or capability to improve.

Worst of all, because of the cack-handed way the Volt offer is implemented, you can cancel the VM install under cooling off rights, but O2 will insist that if more than 14 days has passed since they delivered a SIM to you, then you can't cancel without exit penalties.  I suspect you could break through that by arguing that irrespective of the claim that the two contracts are separate, they are marketed as a whole, sold to the same customer at the same time by the same sales team, and delivered by companies within the same group - but you'd probably need legal advice to structure that argument properly.

I'm sorry that doesn't actually help you one iota, but it might at least condition expectations.

Hi Andrew, This was my fear. It seems that so many people are experiencing this problem and there really doesn't seem to be anything being done about it. I've been a VM customer myself, or in my wife's name at our previous address for over 20 years and when it works, it works great. This is the first time I have really experienced this kind of ineptitude with them however.

I am gutted because we bought this property having checked that VM was in the area, and I Was genuinely looking forward to the 1Gbps broadband that we weren't able to get in the last house. We're definitely a data hungry household and with my job in IT I am also a heavy user. Currently we have a fairly mediocre connection on mobile broadband but the signal isn't great as we live in a valley. The best I can hope for on a phone line connection is not much better.

The O2 thing really annoys me though as I was talked in to going for it on the assurance that it would be a better deal overall but it's the only part of the deal that has been delivered. So overall it was a terrible decision.
0 Kudos
Reply

Same issue of yours since sep,2021

every time call in cs service,just got **bleep** ans like they are on the way ,but there already 5:30pm.

Is there any forum moderator that can at least look in to the issue I have and let me know what the delay is please?

I know there was a blockage in the street that someone has reported back to VM, and I had another visit in mid December where they agreed to install the cable to the other side of my property and therefore miss the blockage out - so that shouldn't be a problem any more. I've got green spray paint on the wall outside to indicate the new entry point to my property but we just need someone to come and dig the hole and pull the cable.

Thank you so much for your post and I am so sorry to hear that this has happened with your installation.

I can fully understand how frustrating and inconvenient this must be and I am so sorry again it has happened.

I'd be more than happy to look into this for you I'll send you a PM now so we can investigate.

Thanks @Ashleigh_C I've responded, hope you can help!

VM just called to tell me that I need a cable pull, and that my installation date is now delayed until February 15th. What a joke. And I bet exactly the same thing will happen in the days leading up to that, I'll get another call telling me that a team needs to 'do some external work outside your property' and that there's a delay to the installation.

How this company operates is unreal.

And I waste another hour on the phone to find this out after missing the phone call earlier.