I started to get huge issues with connecting to my work VPN recently from home and after searching this forum thought the only recourse was to change it to 'Modem' mode and buy a decent router.

However my clever IT people suggested that I needed to opt out of a feature called ANES for VM, this can only be done whilst connected to your VM router and NOT connected to the VPN. It worked a treat for me, link below:

Thank you for posting this. I can't see how opting out of Advanced Network Error Search would affect a VPN connection, but if it works for you then that's fantastic.I'd like to mark your post as a Helpful Answer as it may help others who search this Forum for a solution. If you copy/paste it as a reply the I can do so.

sheroo
Tuning in
39,457 Views
Message 3 of 39
Flag for a moderator
Helpful Answer

Searched from elsewhere, this is the reason why it causes issues:

What effect might Virgin Media Advanced Error Search have on establishing a VPN connection? (strictly for techies)

If the concentrator FQDN is not in DNS (and it is the responsibility of the owner of the concentrator to ensure that it is), then Advanced Error Search would intervene, and a failure may occur (i.e. the VPN client would be redirected and would try to establish a VPN connection to the Advanced Search server). However, if the client uses a non-existent concentrator FQDN, a failure would occur anyway, as a conventional DNS server would not return an IP address for the concentrator, and so no client-concentrator connection could be established. The mode of failure would most likely be a timeout in this scenario, rather than a name not found error however, so there might be a slight difference in the presentation of the error to the client.

Not sure where you want me to copy/paste to?

That's fine, thank you sheroo. Let's see if it assists any one else - we have previously had reports of issues though VPN works for many so we have not previously identified a culprit. Thanks once again 🙂

Presumably the ANES toggle switch is readily accessible in the router set-up tab?

It is something you can do from the my.virginmedia.com portal Advanced network error search although please bear in mind to do it from your VM connection as this is normally verified.

Hi there, so I have had massive issues connecting to my Work VPN since moving to Virgin Media from TalkTalk (its never connected on Virgin Media, but worked perfectly on TalkTalk). I set the Advanced Network Error Search to No, as suggested above, no improvement.

Additionally, I've spoken to the Virgin Helpdesk and they've said that they know what's the issue and can fix it if I sign up for a 12-month support fee-which I am definitely not going to do. I've spoken to my work network people and they've said its a known issue with the Virgin Superhub 3 and they suggest put it in modem mode and have a separate wi-fi router, which I've seen suggested a few times on here.

As things stand I will probably do my remaining 10 months on Virgin Media and revert to TalkTalk. TalkTalk Customer Service is better, they never tried to upsell a support contract and things just worked. I wouldn't recommend any business users to move to Virgin, the time you'll spend on the project is simply not worth it. £ 42 Virgin next year v £ 27 TalkTalk and no stress and you can probably knock them down a bit to reclaim you as a Customer, its a no-brainer.

Anyways here is the screen I get when I try to connect to the Work VPN, does this give any clues what the issue might be ? I would like to resolve this as it will also benefit other frustrated users, I strongly feel its wrong for Virgin Media to charge users for services which should just work 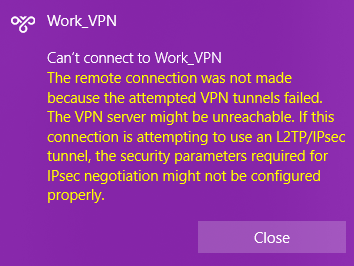 legacy1
Alessandro Volta
38,659 Views
Message 8 of 39
Flag for a moderator

You already know how to resolve this you said so your just choosing not too.

Hi, thanks for that.

This forum is frequented by Virgin Media & other technical experts, so my message with a useful screenshot error message was to spark useful debate about why VPN works for some people and not for other people, its very hit and miss when Virgin Media is your ISP. It should serve as a good place for non-Virgin VPN users to get information if Virgin is right for them-before its too late.

Of course, some people have the time to source, buy, install, configure, make secure, maintain an additional router, and that is fine. However, if that is your preferred option, you might as well go with TalkTalk as you'll have none of the headaches and overheads associated with that second-rate solution.

Hoping to get some useful replies now.

This worked, but I also had to restart my router after turning the ANES off.
0 Kudos
Reply