Hello, I have had a superhub 5 for a few months now and today it has just been replaced with another superhub 5 because of an ongoing issue with the telephone line, which allows calls to be placed and recieved until the connection of the call and it just drops. I must say though, I want my old hub back! I don't know how or why, but the old one had the same issue with DHCP but one day, randomly after checking many times a week this hub allowed me to disable DHCP as I run a Raspberry Pi with PiHole for DNS and DHCP services. The new hub has the same "bug" or "feature" that the DHCP returns the error that DHCP cannot be disabled as of this time and to try to again later: 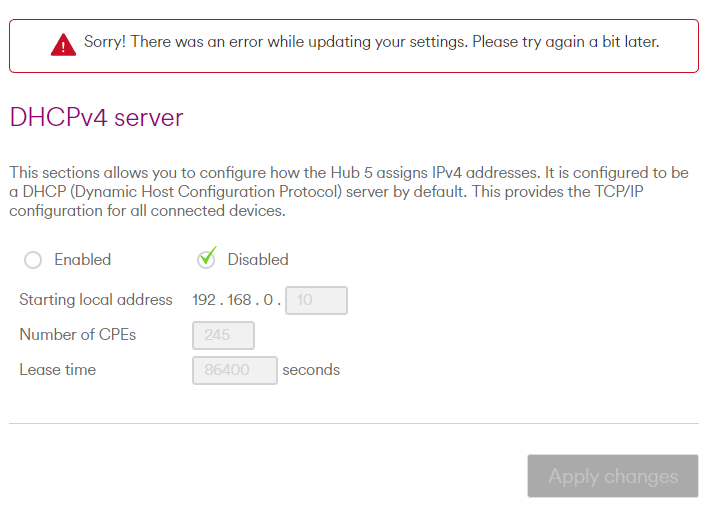 Now I am stuck back in a position where the DHCP between my RPI and Hub 5 are fighting between each other to serve my many clients. Does anybody know how to resolve this? I am stumped and can only ascertain this must be a flaw with the firmware for the hub 5.

Services like DHCP and DNS are very iffy on all VM hubs. The only real answer is to get your own router.

This is not an answer because this would eliminate the option of utilising the hub 5's wireless AX aka 'wifi 6' capabilities unless I shell out an extortionate amount of my own cash for a router which isn't necessarily needed.

The services themselves are absolutely fine, but why clearly present an option to the end user if it doesn't work? It's a catch 22 situation, either remove it from the UI, or fix the issue that is present. But to leave a non functioning option in the UI not only is frustrating to users like myself who cannot disable them, but it also looks unprofessional from Virgin Media that they have buggy firmware code running on customers super hubs.

As stated in my original post, my old hub 5 for some reason allowed me to disable it eventually. Maybe a firmware update? Maybe a bug in itself? Who knows, because I sure don't. 😊

Wait all you want the option should never have been in the hub in the first place.