Hi. Just posting here because after a month of ringing support we can't get past the "reboot your hub" stage, so hoping I can get my issue looked at by someone else.

The issues are as follows:

Upstream speed drops to near zero intermittently causing periods of high latency and packet loss. This doesn't necessarily cut the internet connection (but the latency naturally causes services such as gaming or streaming to disconnect).

In addition, the upstream qam often falls from 64 to 16 during this time.

Additionally, there are periods where we will suddenly see tens or hundreds of thousands of post RS errors across a very short space of time (a couple of minutes).

This is obviously more noticeable when doing something traffic intensive such as watching a video stream or online gaming but can also be seen on my bqm graph during the night, etc.

Previously when we have had problems such as these it has often turned out to be fixed by an engineer messing with the CMTS or one case, by replacing the actual cabling to the house which had become damaged.

The service cut out again today with the following warning.

The downstream power levels also seem all over the place ranging from 3 to 8 which is wider than usual.

The pics are after the most recent reset. I didn't post the second set of downstream stats as right now there are only a normal handful of pre RS errors and the rxmer is 39.8 to 40.9 which is normal with the exceptions of channel 17 at 38.6 which while only slightly lower, is the channel with the power level of 3. Upstream shot is included though right now showing no unusual activity. Also included is sample of error log. Modem has been reset and pinhole reset many times which generally fixes things for ten minutes to a couple of hours. 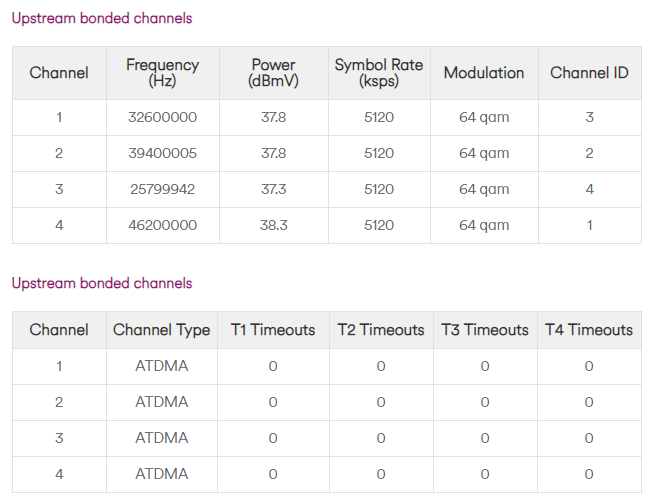 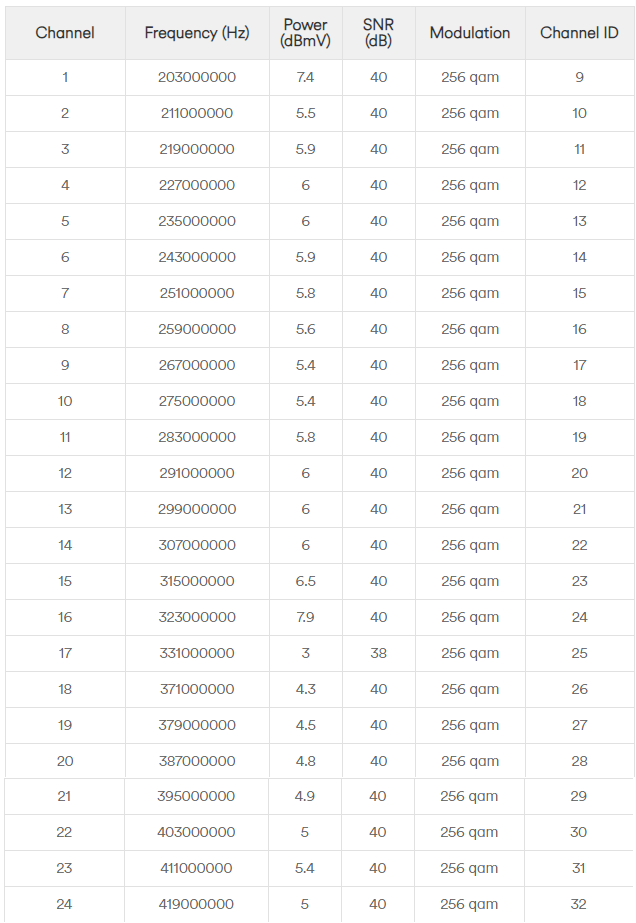 Thanks for posting. My apologies for the broadband issues.

I've checked this on our system and some of your downstream channels are out of spec, this needs a technician visit to sort out. I've booked in the first available slot for you and you can find this information here

Let us know how the visit goes.

So, an engineer came out, thank you. He informed us that everything was fine and seemed within tolerance and that he couldn't see any significant issues on the network. He was at least helpful and tweaked one setting which he said was borderline. He contacted me a couple of days after to check and at the time, things seemed to have settled down a little. However, that really hasn't lasted.

I reset the modem at 6pm ish yesterday evening as I had some work I needed to do that included voice communication and thankfully the connection held up fine for the duration. It's now 2:30pm the following afternoon and I was merely listening to a youtube video while browsing some (mostly text based) websites as I was taking notes. There's no other real activity in the house other than my father browsing ebay on his phone, and this is what I'm dealing with. The two upstream shots were taken mere minutes apart to highlight just how frequent these errors hit.

We also have two new error messages that have turned up in the logs. 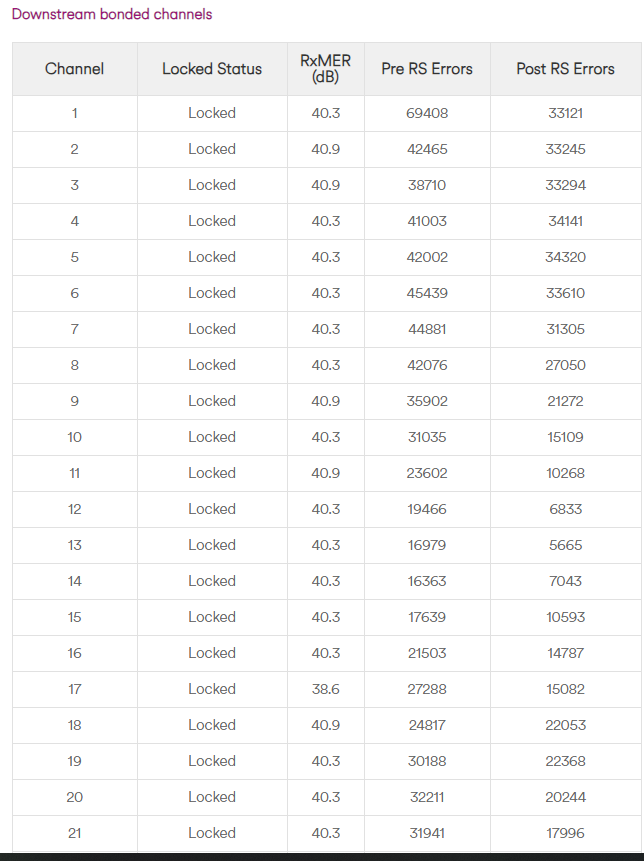 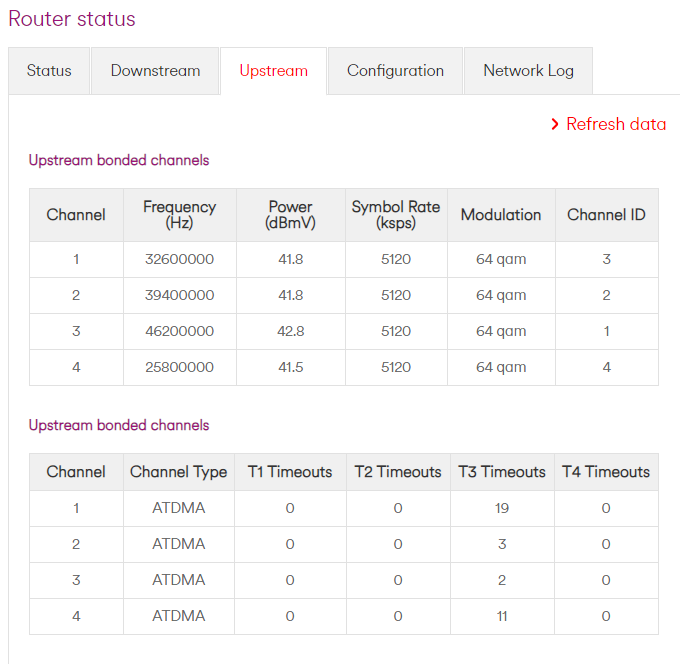 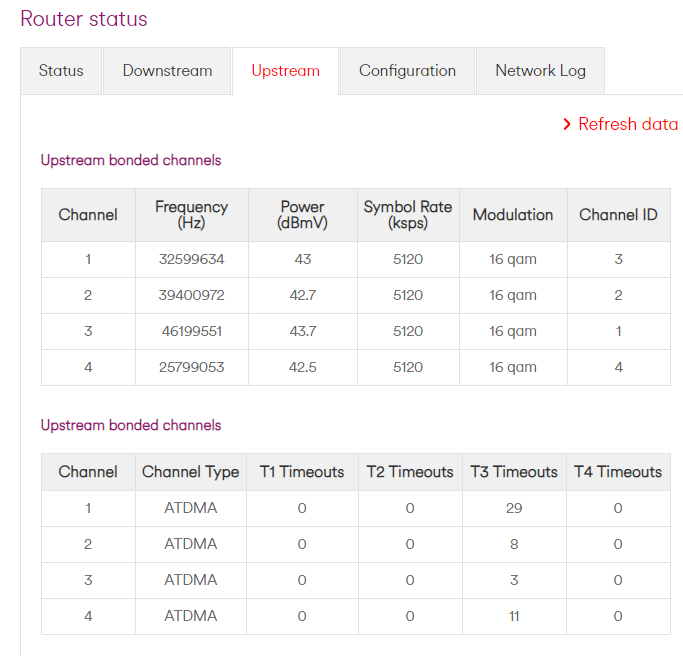 I guess what I'm saying is, I'm not convinced that everything is fine and within tolerance but really aren't sure where to go from here. I feel like 50 odd T3 timeouts across half an hour is excessive. Could these be caused by devices on the network? Should I be looking at things we have connected for the faults (which seems to be the suggestion phone support always make) or is there something else at play?

Many thanks for getting back in touch and for the update. I'm very sorry to hear the issues have returned.

I've had another check of the account and can see that there are certain stats that are not looking good at all. I've booked another appointment and noted the issues fully on the account so that the engineer can have a better understanding of what's been going on for you since the initial appointment and hopefully we can get this resolved swiftly.

The appointment can be checked via your MY VM Account and can be changed there if needed.

Just to keep all this information in one area. I reset the modem after making the last post so that I could get on with using the internet, only for it to be down with an Access Denied message for over ten minutes with the following error in the log "DHCP FAILED - Discover sent, no offer received"

It is now back up, but has already had 2 more T3 timeouts since then.

Thanks for the update and sorry to see the most recent issue this sounds very frustrating.

Hopefully this will be resolved fully following the engineers appointment I do apologise for the disruption in the time until then.