We've had an issue with the internet cutting out on all devices (Wifi and Ethernet) frequently since around August last year. We rang Virgin to explain the problem and an engineer was sent out to us, he said everything was fine but gave us a new Hub 3.0 router and instructed us to reset the router whenever the problem occurs. This happens several times a week though and resetting the router doesn't always solve the issue, sometimes we're left with no internet for several hours with the Hub 3.0 displaying green lights.

I work from home so this has become very disruptive to my job as I will regularly drop out of meetings because I've lost connection. Also, there is regularly no connection when I get up in the morning, meaning I'm late logging onto my laptop to start work because I'm spending time attempting to get the connection back by resetting the router. Despite the engineer saying there wasn't a problem, there clearly is a problem as it shouldn't be cutting out this frequently.

I figured it would be easier to post on here rather than ring the Virgin phone number as we don't usually get anywhere that way.

Any help here would be much appreciated as this issue has become a massive annoyance now.

Re: Internet Frequently Cutting Out

I've noticed on similar posts on this forum, users have been asked to submit the Downstream, Upstream and Network Log information from the Check Router Status section of the router login page. Therefore, I've attached that information below: 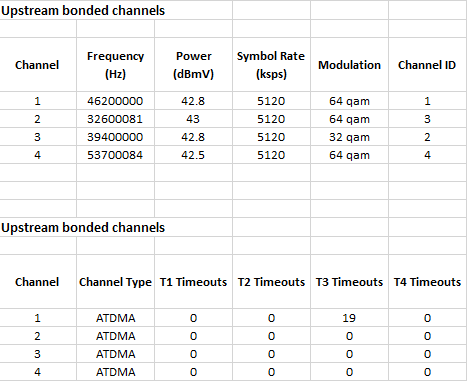 Re: Internet Frequently Cutting Out

Welcome to our community and thanks for posting. Dissapointing to hear about the issues you're experiencing with our internet services currently, we understand the frustration caused especially when it is disrupting you working from home.

Remotely looking from our end with the details you he provided form your community profile, we have located your account and done some checks from our end. At present we can see no issues that would be causing these time outs, all upstream and downstream levels are within specification and there are no area faults having an impact on you.

As its been a short while since you last posted how have things been over the weekend? Has anything improved at all?