For months now almost every day our internet cuts out for 2-10 mins at a time despite saying we are all still connected. It is an inconvenience that we just put up with but it’s been getting more and more frustrating.

I finally decided to set up a broadband quality monitor and what is happening is big spikes of packet loss at the times when we lose connection. 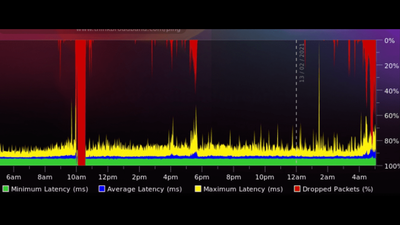 Since we have been having problems we have upgraded to the Virgin super hub 3 as well as had another router professionally installed that is separate to the hub 3 but the problem is still here.

When the cutouts happen every device in the house is disconnected whether it’s using Wi-Fi or ethernet and no matter what router you are connected to.

Sometimes when you check the local area for problem there is something an engineer on the way to fix but 99% of the time we have these problems Virgin says are area is working fine.

These packet loss spikes happen whether or not anybody is using our internet even in the middle of the night when everybody is asleep.

Because we have the 2 routers set up and both cut out at the same time I can only assume that the problem happens somewhere outside of my house but Virgin never acknowledged that as a potential cause, every time we call they give us some vague response just telling us to turn our router on and off which does nothing.

Also by checking on the local facebook page many people in our are also say they have trouble with Virgin but i can’t say if their problem is the same as mine.

If anyone knows what the problem is or whether it’s a bigger problem that virgin won’t address you’re help would be much appreciated.

The widespread and justified moaning about VM is often due to a problem termed "over-utilisation", your BQM confirms that DOESN'T affect your connection.  You've got something unique.

You say you've got two routers - the one downstream of the VM must be in access point (or bridge) mode, otherwise that can create all manner of weird problems.  You need to check that, don't rely on "professionally installed".   If you don't know how, then turn the second router off for 24 hours, see if the problem continues.

Next check I suggest is you connect to the VM hub by clicking on this link http://192.168.0.1/  That should pull up the log in page for the hub.  But don't log in, just click on the link "Check router status"  That'll bring up a window with five tabs.  Open the Downstream tab.  Select all the text (Ctrl-A if using a keyboard), copy it (Ctrl-C), then paste it (Ctrl-V) into a reply here as text (not screenshots).  Post that, do the same for the Upstream and Network log.  You'll get an error message when you post the Network log, just click on "post" a second time.  Then we can check for any obvious problems with power, noise or error counts.

Thanks for the reply, I will try not using the second router for a day and see if that resolves any issues.

Formally all power noise and error levels are within limits.  I'm a bit sceptical of some of those limits, and your downstream SNR is a bit close to the borderline for my liking, and your upstream power levels are close to the bottom of the accepted range, but according to VM's sketchy guidance they are supposedly OK.  But something may be affecting your line, because your hub is failing to pick up Time of Day from the network, and is full of T3 timeouts.

Let us known if having the second router turned off makes any difference.  If it doesn't then I'll flag for staff to comment.

Unfortunately turning the second router off hasn’t seemed to make a difference, the amount of packet loss seemed about the same.

Another post was made on the local facebook about virgin media yesterday and about 6 or so other people from our road and the adjacent one said they’ve been having problems for weeks now, so i wonder if there may be a larger problem in our area that virgin hasn’t disclosed.

I guess an engineer may have to come down and look around if it’s just mine or something they don’t know about yet.

Thank you for taking the time to answer back to me, it’s much appreciated

OK, I've marked your post for staff to advise.  Could be an area fault from what you say, if so there should be a reference and fix date.

For if any Virgin media employees join,

By the looks of it loads of virgin media customers in my area have the same problem as me, and you don’t even tell us there is a problem. someone has even started a petition to get you to acknowledge that you need to come down and fix something.

How can we get an engineer to fix the obvious problem in our area without you just telling us there is nothing wrong over the phone?

For weeks now everyone in our area has been reporting problems but you just play it off like nothing is wrong, we should not be unable to use the internet for 1/4 of the day!

Welcome back to the forums and thank you for taking the time to post.

I am sorry to hear that you have had some issues with your broadband services.

I am going to need to take a closer look into this for you.

In order to get the information I will need to drop you a PM, you are able to find this via the purple envelope on the top right of the screen.