RichLutz
Joining in
1,595 Views
Message 1 of 23
Flag for a moderator

Okay so firstly VM sold me into their GIG1 Package from my M500, Sent me the HUB4 out two days later got it activated and my speed didn't push past 20MB down wired and 6MB wireless,

Connected it into Modem Mode and ran my trusty DECO M5 Mesh connection instead, speeds improved but still quite poor,

Phoned up CS and they rebooted and sent an install Kick this did the job and was flying along at the advertised speeds.

24 Hours later back to square 1 again and slow slow connections, phoned CS the Guy says theres a lot of interferance its coming back as so im going to send an engineer in two days time.

Here is were the bigger issues began :

Firstly they have the incorrect package price of £44 as agreed there charging me £60 and wont do much about it.

And my speeds are basically BT FIBRE 1 Now -

Ive rebooted and reset the HUB4 Multiple times and used my DECO M5 & reset multiple times but my speeds are incredibly slow and nobody on the phone seems to be that interested somehow they have booked me an engineer out monday 1pm onwards to move the hub?
I think i need another hub preferably the hub3 again haha.

This morning i have reset it all again and turned it into modem mode but guess what?

The WIFI Is still being broadcast from the HUB4 as well as the DECO Mesh Network so somewhere along the lines the HUB4 Isn't doing as it's told and sounds the culprit to me.

Anyway from VM here have a closer look or someone offer me more advice as im pulling what hair i have left out and it's frustrating to say the least.

Before starting ensure the primary Deco unit is set to be in Automatic IP i.e. DHCP (& Nat) mode, Then disconnect it and the other units and switch them off. Then pinhole reset the Hub exactly like this....

Disconnect any ethernet cables from the Hub (leave the coax connected), and then with the Hub still "switched on" throughout, press pin in firmly with paper clip/SIM tray tool or similar "thin thing" and hold it firmly for at least 60 seconds, release the pin, leave for 5’ to stabilise - dont manually switch it off at any time.

Then, put the VM Hub back into modem mode ( https://www.virginmedia.com/help/virgin-media-hub-modem-mode ) and wait for it to initialise 5-10 min.

Once it’s in modem mode, the VM hub “MUST” then be powered off. Switch your Deco primary unit on on and make sure it’s fully initialised (leave 5 min) and only then put in the ethernet cable from its WAN port to the VM hub (any port will do).

NOW… power up the VM hub and wait 5-10 minutes for The Hub to initialise and and you should get a connection. Use the recommended App to connect th other Deco units to the first one.

See if that stabilises things - report back

RichLutz
Joining in
1,527 Views
Message 3 of 23
Flag for a moderator

Thanks for the reply !

done everything as described and to no avail.

i left it for two hours and still same problems.

what is strange though is that if I run a test using samknows it’s giving me a higher upload than download ?

after two hours I reset all again and setup deco as new system and it still stayed the same speed if not got a little worse then a little better.

If I run a speed test using Sam knows I get the same results , if I use Google’s through chrome on Wi-Fi it showed 302mb down but couldn’t record an upload speed , if I use it Ethernet it’s the same speeds.

tested on fast.com max speed that reports is 42mb at the moment.

im going to try post the figures from the Hub4 page in a moment to see what you all think.

RichLutz
Joining in
1,522 Views
Message 4 of 23
Flag for a moderator 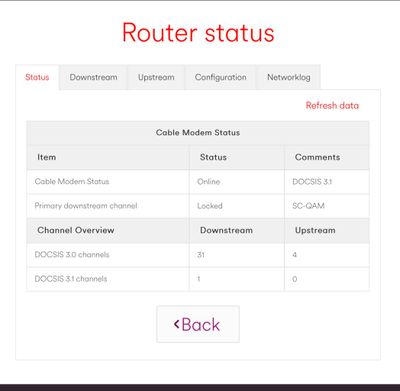 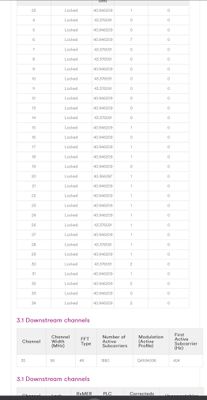 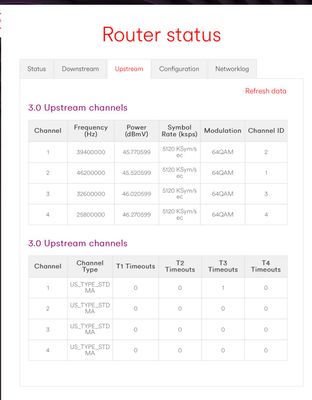 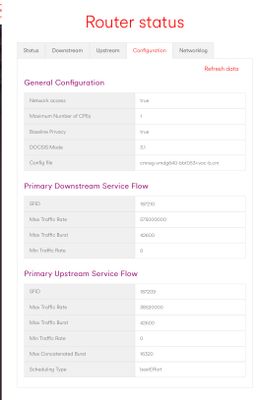 Please cut and paste all the stats, the photos are extremely unclear.

RichLutz
Joining in
1,495 Views
Message 6 of 23
Flag for a moderator

RichLutz
Joining in
1,494 Views
Message 7 of 23
Flag for a moderator

RichLutz
Joining in
1,493 Views
Message 8 of 23
Flag for a moderator

RichLutz
Joining in
1,491 Views
Message 9 of 23
Flag for a moderator

If you see anything that does not look right there let me know,
Also im still able to access the HUB Config page even through using a deco mesh network hard wired/wirlessly on the old hub3 i was unable to do this is this a new feature or a fault?

Nothing stands out in those stats, a few Pre RS errors are to be expected and they are correctable. It’s a known problem/fault that you can still access the Hub4 on both 192.168.0.1 and 192.168.100.1. Out of curiosity what is the IP address of your master node.