High Latency for over 12-18 months

Hi my name is James

Firstly I would like to start this thread off with saying I am no stranger to high latency issues and how to resolve them in most cases I work as a 2nd line computer engineer full time. I have explained this to numerous operators on the phone and never get through to anyone who understands the terminology of my current issue.

I have been with Virgin since Sept 2020 and from the get go had nothing but issues regarding latency errors while on Ethernet. I started off on VM100 and I am now on Gig1 .

I have tried numerous phone calls to Virgin and numerous attempts to fix the issue my self. After about 18 months (Last month) an Engineer finally came out to look at my issue as I was originally told by an over seas operator it was £150? The last person I spoke to was shocked and did not understand why this was told to me.

Anyway the engineer who came out swapped out the wall socket into my house and checked the cab on my road. He saw and I quote "The cabling going to your house doesn't seem right it was all lose and didn't seem connected in correctly"

After the mans visit my issues of High latency packet loss were a thing in the past until about 2 weeks later where they came back.

Now as someone who works from home very often using VOIP services and RDP's to clients machines/servers High latency is a kick in the teeth. When I say high latency Im not just talking about 60-70ms response times im talking jumping from 29ms (On ethernet) to 350ms and up and down from there. This is especially frustrating when gaming too.

And to cross off the idea of the cable being the issue I plugged the desktop into the box direct using a 2m cable and the same issue was presence.

I'm really at a loose end with this now I'm paying nearly £60 a month for internet that is shocking and Virgin can't seem or don't seem to want to help fix.

Setup a BQM here www.thinkbroadband.com/ping to monitor and record your circuit as evidence if needed.

Also note VM do not guarantee wifi speeds and the Residential contracts have no SLA's.  If you need service for work, either move to VM Business or an Open reach based supplied.

Once you have posted the stats and BQM we can comment .   Thanks

Thanks for your post and welcome to the forums. It's great having you on board with us in the Community.

I'm sorry to hear that you are having an issue with your connection. Taking a look at the systems this end, all power and signal levels are optimal, there is nothing suggesting there are any issues. I've looked at the area segment too and that's all good too.

So we can take a closer look at things, can you please set up a broadband quality monitor and post your live URL link here. We can use this to consult with an Area manager to see if there is anything further we can do.

Sorry for the long reply I have been away for a while and forgot to do this before hand.

Prime example, can be seen below 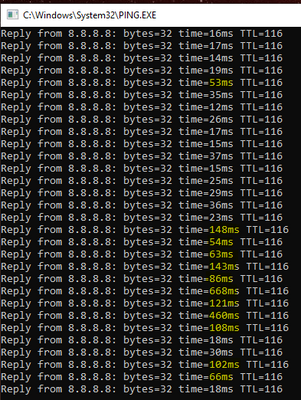 This is at 11pm on a Tuesday. Ethernet connection might I add (Cable has been changed x2) I really want to leave virgin as the customer service is shocking however I find it insulting I have to pay £350 ish pound to get out my contract which has been awful from the get go

First impressions (based on half a day's results) are that your connection probably suffers from over-utilisation of VM's local network.  I base this on the very high latency that magically improves at 12:30am - a classic symptom.  The hourly spikes are normally where a connection is on speed test by VM, set up by their agents, and that's a separate issue.

Over-utilisation is equivalent to excessive contention on Openreach, although the details are subtly different.  Basically, over-utilisation is where VM have insufficient capacity at peak times on the analogue radio frequency network between your hub and the CMTS that sits at the head of the local distribution network.  Whilst there's various possible underlying causes, usually the latency is caused by packets being queued at the CMTS because traffic exceeds the real time processing capacity.  The roots of these problems are protracted over-selling relative to available capacity.  When VM recognise a problem they do try and stop selling, but these processes don't seem to happen early enough, added to which VM's tests for over-utilisation are very undemanding, hence the problem.

If my suspicion is correct, there's nothing you can do to improve matters, and this is unlikely to be an easily resolved noise or settings problem. In some areas VM do undertake work to rejig the local networks to balance loads and eliminate over-utilisation, and they do spend millions each year on capacity improvements.  But sometimes/often that's judged uneconomic, or simply a lower priority than other investment options, and if your area isn't up there on the priority list, nothing will be done and the problem can persist for years.  VM's track record on dealing with over-utilisation is very poor and often there's denial, unhelpful statements that "across a 24 hour period there's no problem", but even if there is a fault reference and a "fix date" there's no way of knowing if that fix date is actually backed by a real plan of action and programme of works.  Quite often it seems not, and as the fix date approaches it is simply moved a month or two ahead.

This far I'm ahead of myself, we don't know if this is a utilisation problem, a few more days of the BQM will confirm.  I am assuming that VM have repeatedly checked the hub from their side and assured you that all is well.  Staff here operate under a strict policy that they must tow the company line, and that line says that unless over-utilisation has been formally diagnosed by the Networks team, then they must state that no problem exists.  If my spidey-senses are correct then your options are limited:

1) Sit it out, and hope that VM do carry out improvement works. There's little or nothing you can do to force VM to upgrade the network, nor to be honest about the outlook.  One or two customers have managed to drive progress on this front themselves, but typically we're talking seven months of brutal persistence, and interaction with VM every two or three days across that time.  Even if you're quite remarkably focused, that's a level of commitment that will be a drag on your wellbeing.

2) Get yourself a new ISP.  If you're in a fixed term contract you'll probably have to use the VM complaints process (and almost certainly escalate for arbitration at CISAS ) to be released from contract without penalty. If you need to do this, the grounds of your complaint is the poor performance, and your request for release from contract without penalty is twofold: First the Consumer Rights Act 2015 that requires any consumer service to be provided with "reasonable skill and care", and second, the Ofcom Fairness Commitments, that state "Customers’ services work as promised, reliably over time. If things go wrong providers give a prompt response to fix problems and take appropriate action to help their customers, which may include providing compensation where relevant. If providers can’t fix problems with core services they have promised to deliver within a reasonable period, customers can walk away from their contract with no penalty".

Let's see what the forum staff have to say, and the BQM shows over a couple of days.  I could be (and occasionally have been) wrong about these matters, and the company may identify and fix a fault in short order.  On the other hand, I'm right a lot more often than I'm wrong on these matters, and the persistence of the problem and ongoing failure of VM to fix it so far would suggest that the problem is one they choose to overlook, which is often the case with over-utilisation.

as per Andrews reply think the best thing to do is to cancel my account however I am not happy with cancelling for a charge , is this something that can be waved given the issues I have been experiencing for so long with little to no resolution?

As much as I would like to stay it just isn’t working for me and is affecting me working from home and gaming in my spare time.

any resolution would be good to cancel free of charge

Hi Andrew I would just like to say thank you for your insight very understanding and detailed response , I have today cancelled my virgin media package under the consumer act and it was now finally free of charge.

thank you for your assistance in this , hopefully onwards and upwards from here 🙏🏼

I would also like to ask for your help. I have continued to experience high network latency issues, as described in this thread, which makes video conferencing and real-time applications unusable. When I moved to VMB, I did not realise that VMB use the same infrastructure as VM retail and complained about the latency issue and high network contention - I did not receive any recourse. After almost one year of this problem, please can you explain how I can also end my contract because I consider the service not fit for purpose. I do not believe there should be any penalty for contract termination. I have a business that requires video-conferencing with my development team during the day as well as evening. I have set up a broadband quality monitor which confirms the continuing latency issues during this week. https://www.thinkbroadband.com/broadband/monitoring/quality/share/c1c65cd1cf369630abbe73d670905d3188...

Your help would be appreciated.

H there @ms_pensar, welcome to our forum and thanks for your post.

I'm sorry to see you have been having issues with latency. I can see that you have mentioned you currently have a VMB contract. As this is the case we are unfortunately unable to help further as we are unable to access business accounts.