I have just moved onto the 1Gb service. I have major speed issues only getting 170Mb download the ping and upload are fine. I would like to know if there is anybody else having issues with the Hub 4. I have serious issues with this Hub from the design to the cooling of the chipset. I have found teardowns of this hub. I have noticed that the heat is crazy at the top of the Hub when in Hub mode and its ok in modem but that is not using all the chip or the rest of the resistors or the rest of the hardware. I am not able to test how hot it is getting under load due to the fact its the only one I have and I don't think Virgin would be best pleased if I tear it down to test it. For anyone interested here is the link to a teardown of the hub. http://bbs.ntpcb.com/simple/?t119873.html.

The fan does not seam to do much or able to push the air through the top due the restrictions on the PCB's (boards) and then past all the plastic holding the antennas. Mine I think maybe damaged as I did hear a pop when I was taking it out of Hub mode into modem. It had a strong hot electrical smell and the top of the hub was really hot to the touch. I will use this as a update to the hub and service.

I am Based in Warrington and getting this service from Manchester area. I have been informed that Manchester is having issues with the service.

Has this issue been sorted, I can test remotely the speed if you wish

gary_dexter
Alessandro Volta
2,157 Views
Message 3 of 19
Flag for a moderator

How are you speed testing?

Dont use a mobile or laptop with WiFi as it may not support speeds faster than what you are currently showing.

What speeds do you get to the hub using this link:  https://samknows.com/realspeed/

Just found about this thread.  I came to the same conclusion after multiple reboots a day and toasting my morning breakfast on top of the router.  I made up a cooling base consisting of a mesh cage and a 80x80mm usb fan.  All parameters returned to normal within seconds and the top of the router is now stone cold.  Virgin engineers won't admit it's a problem but they haven't denied it either.  They just seem happy for me to find my own solution when they could have told me about the solution days ago.  I suppose that would be admitting corporate ineptitude.

legacy1
Alessandro Volta
1,992 Views
Message 5 of 19
Flag for a moderator

jhuk
Problem sorter
1,951 Views
Message 6 of 19
Flag for a moderator

I have raised mines oi little feet to give more air-gap at bottom and it has a lot of space above it but a small cooler like you get for Laptops to sit on would be good but not if I can hear the fans and I have very good hearing so...

I don't want to cause any problems for the excellent engineer that has just left.  Let's just say my claim there is a design flaw has been 100% vindicated.  The sole issue is HEAT viz lack of efficient cooling.  SOME units run very hot during an extended burn in period and that coupled with the poor cooling has been causing issues on many new routers. IT IS a known issue.  The guy reckoned, given the lingering smell, my jury rigged fan saved the router.  Not all will cause problems if the are in a cool area and burn in rather better than mine did but external cooling for a few days at least would solve the throttling problem as it did mine.  The engineer also fixed my Tivo box that Virgin insisted there was no issue with.  It seems this box is not as tolerant  of HD signals as the alternative model.  He brought it back well into spec by fitting an attenuator to the input cable.  All in all an extremely good visit.  Just a shame those on the other end of the phone aren't as clued up as even I could have tried an attenuator though without the meter it would have been guess work.  Virgin seem reluctant to admit to known issues but admitting they do exist would allow us to change the environment or jury rig a solution if we knew for a fact there is a known issue.  I understand WHY they don't as a matter of policy, after all, who wants to admit they stuffed up?

Anyway thanks for all your help and especially to engineer Dan who is a very competent engineer and personable guy.  He WILL get full marks. 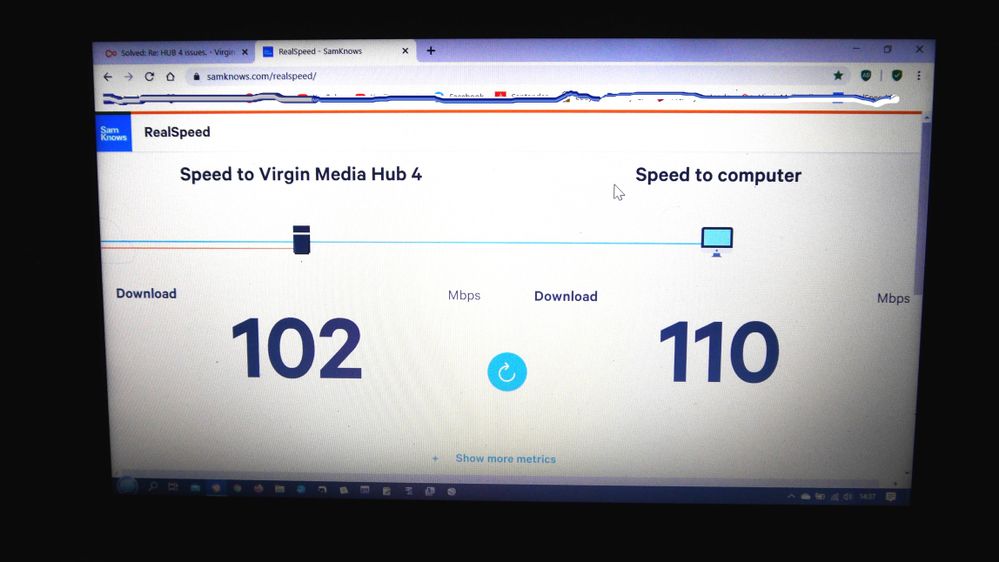 Post engineer visit plus external cooling via 80x80mm USB fan under the base of the router.  I recorded temps of 90 deg C during burn in,  47 deg C after burn in (approx 72 hours) and now with cooling 24 deg C!!!!  The figures say it all.

@legacy1 wrote:
Probably don't have a big heatsink on the CPU if at all!

Surprisingly it does if you look at the tear down link in the OP's first post.  But, the airflow from the bottom to the top seems hindered and not at all streamlined.

I have an 80mmx80mm fan beneath mine and I'm sat next to it and hear almost nothing.  The benefits of the additional cooling far outweigh any small disadvantages.  This HUB 4 is now performing flawlessly, well almost.  The wifi range IS also a known issue being weaker than both HUB 2 and HUB 3.  A judicially placed extender solves that.  It's surprising what you learn when you speak to someone at Virgin who knows the issues and is prepared to discuss them honestly.  ALL these issues are easily overcome so their reluctance to admit to them is rather frustrating.