For some reason the devices connected to the 24 port switch keeps losing connection (typically within 24 hours). Unplugging and replugging the cable from the switch to the router seems to help reset and it begins to work again. Strangely I don't seem to have any problems with the 8 port switch. I've reset the Hub a couple of times but this hasn't solved the issue. I don't think there's an issue with the switch (I've pinged 2 laptops directly connected to the switch a number of times successfully).

I'm struggling to think what else to do. I thought I'd see if there's any troubleshooting tips I can try first before getting VM involved. Any ideas/helpful would be greatly appreciated.

Any chance that you can post a line sketch of your setup?

I am having problems seeing it in my mind.

Mike Robinson
Aircraft Engineer & Computer Based Training and Learning Designer for many of the world's Military Arms.

They only test each port on the hub for one device the hub is expecting one source MAC per port its not coded well for many source MAC's and IP's.

Get your own wireless router and put the hub in modem mode.

I thought I'd see if there's any troubleshooting tips I can try first before getting VM involved.

Whilst a negative view, I'd counsel that it would be a complete waste of your time to try and get VM involved.  First line technical support is the sort of offshore operation that gets offshore call centres a bad name, and they'll maintain that the problem is your equipment.  Even even when dealing with the far more helpful UK staff I don't think there's much depth of expertise in the hub's technical capabilities.

Like legacy1, I think that the solution is a new router, and given your requirements, something in premium territory.  Expecting a circa twenty quid cheese-pared ISP router to cut it managing 32 switched ports AND an access point is perhaps a tad over-optimistic.

Agree!! The OP is most likely flooding the Hub 3 and it's failing to keep up. With the amount of MAC addresses flying around a premium router would be best, maybe one of the Vigor range without WiFi, e.g. 2862 ?
0 Kudos
Reply

Thanks for the responses. I've attached a diagram chart which shows my current set up. The AP connected to the 8 port switch is handling all the traffic of the wireless devices and the Hub 3 doesn't seem to have any issue with this (given the number of IP and MAC addresses). 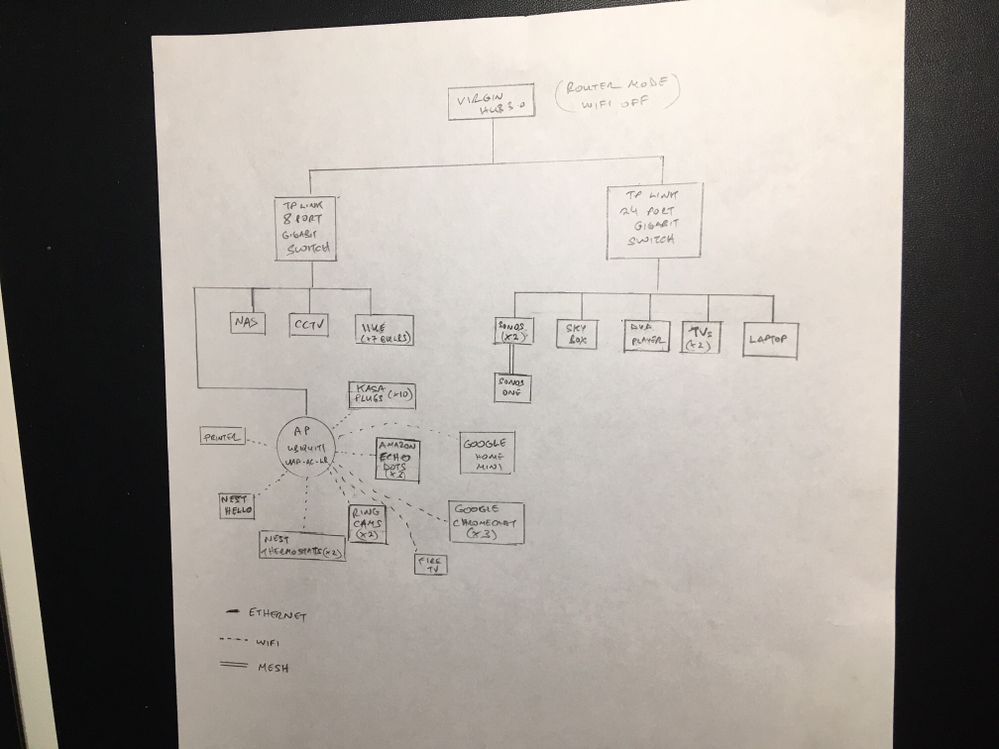 As some have suggested, it might be best to use a more powerful router - but will this significantly reduce the internet speed?

I once spoke to VM CS about Powerline adapters (as I was struggling to get a wifi signal to my outdoor Ring cam). The agent suggested I plug the adapter outside. When I asked if they were IP rated, the person thought I was asking if the adapter had an IP address. I had to explain what IP rating was. Needless to say it wasn't a very productive experience I suspect that they wouldn't be able to help me on this occasion.
0 Kudos
Reply
Highlighted

The other thing I should've mentioned is that, given the number of unsecure devices in the network, I purchased a Unifi USG to sit between SH3 and the 8 switch - the purpose being to section off data sensitive ethernet devices (NAS, laptops, CCTV).

Devices not considered core/data sensitive, would be connected to the 24 switch and protected by the SH3 firewall. I haven't installed the USG yet due to the switch issue. As some have suggested, if I were to install a more powerful router (eg Vigor 2862 or similar) is this going to cause firewall conflicts (SH3, USG, Vigor)? Apologies for digressing from the original query.

I have a USG4 Pro and 1x16 port and 2x8 port Ubiquiti switches attached to it, with 2 x Unifi AP AC Pro’s, plus a Cloud Key2 and cameras. Running with about 45 devices and all works extremely well.

It's very easy and tempting to simply do a knee-jerk 'it's the VM Hub, it can't cope with the number of Mac addresses, 'they only test each port on the hub for one device - really? You know that for a fact or have you just made it up?

What strikes me though is in the opening post : 'Strangely I don't seem to have any problems with the 8 port switch'. Nobody's picked upon that? The 8-port switch has the bulk of the devices on it, roughly 30 or so judging from the network sketch - and wouldn't you think that it is was an issue with the VM Hub not being able to cope, that it would be that leg of the network which would have the issues not the 24-port switch with just about eight or so devices.

@paul307130 a couple of questions, firstly why two switches - are they in different parts of the house? You've bought yourself an Ubiquity USG; but that is a router, the last thing you want, is to have a Draytek (or similar) also in the mix, start linking routers together and unless you are very careful it'll get messy, very quickly. I don't think you have said what model switches you have, but do they support VLANs?

If it were me, I'd go, VM Hub in modem mode into the USG WAN port, single connection to the 24 port switch, VLAN off a number of ports and define a subnet for devices which you think are more sensitive. Control all the traffic access with rules on the USG.