Hi, I am having terrible problems with my network / internet connection and at the moment I can't work out what it is.

My problem is that at multiple times through the day I get all the symptoms of buffer bloat. The thing that makes the issue complicated is that it is only when my WiFi is connected to the network.

When I plug my WiFi in, things are OK for a little while and then every 20 minutes or so I start to get the buffer bloat problems.

I have setup limiters on my pfSense network to restrict the bandwidth all the way down to 10mbps/10mbps and this helps slightly, i still get some loss packets dropped but not a complete loss of connection. At 100mbps/100mbps I go offline again.

The problem is worse when there is heavy traffic on the network, but it can happen at any time. This morning for instance I changed the WiFi name and password so that everything would disconnect and I only connected one device, that was fine for a while, but as soon as I tried to do a speed test, I lost the connection again.

I have tried changing my WiFi hardware between UniFi and TPLink devices in case that was the issue, but the issue remains the same.

Here is the output from the Hitron

and here are some of the DOCSOS events. There are a number of  Errors and Critical events, but not sure what they mean.

I have phoned VM, who said that my line looked OK, but the funny thing was that my service was out while I was on the phone to them and as soon as they ran the tests on the line, the service came back online. They told me they could send out an engineer, but if they found nothing wrong, I would be charged for the call out, so I am reluctant to do that until I can count out an internal network issue.

This Community Forum is for Residential users only and does not cover Business accounts.

However, the stats look okay, so it may help if you setup a BQM to monitor your circuit to see if it's over utilised at peak times.

Not too sure if the Hitron can respond to pings?  Or it may need to setup on your pfSense Firewall?

I suppose this says it all.

As far as I know, there isn’t one. But you should have telephone support and an SLA agreement.?

Thank you. I already did that, and got the old. Turn it off for 10 seconds, then turn it on, followed by there is nothing wrong at our end. We can send out an engineer, but if he does not find a fault, we will charge you a call out fee.

Are you in modem mode?

Sound like a infected wifi device DoS out your upstream

Change your wifi password and connect devices one at a time

Are you in modem mode?

Sound like a infected wifi device DoS out your upstream

Change your wifi password and connect devices one at a time

I agree - this is the best way forward - isolate which device(s) are apparently causing the problem and then look at these in depth to resolve - if, when you reconnect the rogue device the problem reappears, keep that device off the connection until it's sorted

Could could also look at capturing packets to see if you can pin down which device is causing the problem and the nature of the traffic.

I think I have found the problem. I looks like the culprit is pfSense. I have plugged my WiFi direct into the VM router while the the rest of my network still on the pfSense, which is a lot less devices. The WiFi is now working just fine. The symptoms I was having with buffer bloat are now a lot better. I have added a traffic limiter on the pfSense to make sure it can't push out more traffic than the speed offered by my VM connection. You can see clearly in the image below where i moved the WiFi off pfSense.

You can still see some smaller spikes in latency, I am not sure if they are normal or still an issue with pfSense but they are much reduced due to the reduced traffic. 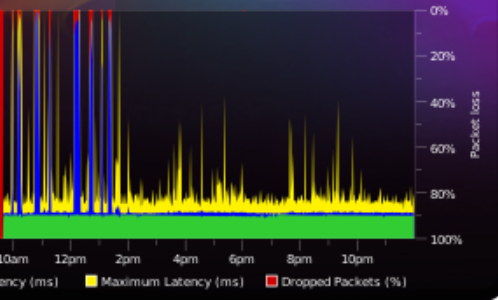 I do very little communication between WiFi and LAN so that fact the two can't talk to each other at the moment is that is not a real issue.

I will take the issue up further on a pfSense forum.