5ghz Network has renamed itself!!

Background:  During install,  I had to split 2.4/5ghz networks to get some older smart plug devices working.   So I have two networks,  the VMxxxxxx  named 5ghz one,  and a 2.4ghz one I added.

I moved the critical stuff over to 2.4 in a rush just to try to fix it - then just now had a proper look.

Anyway, it seems the VMxxxxx (I'm writing xxxxxx because I can't remember the number) has renamed itself,  and is now called what I assume is the MAC address of the router.

Here it is,  connected with the password for the previous VMxxxxx network.    So I guess my question is,  what the actual flip has happened, why has my wifi renamed itself and broken almost every device in the house,  and how do I fix this without having to reconfigure the wifi on every currently broken device in the house?

Before you ask,  yes I have rebooted the Hub 3.0 router! 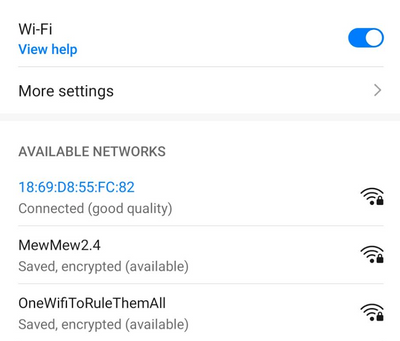 Just log into the hub and change the name back to what it was, I have no idea why it changed.
0 Kudos
Reply

Maybe the hub in router mode has a vulnerability for changing the SSID remotely. I would think about getting your own router with 1Gb ports and use modem mode.

Yeah so now I feel like a fool for not just doing this.

A bit more searching on this forum suggests it's not an entirely uncommon problem for the SSID to change to either just "1"  or to change to the MAC address of the router, some sort of firmware bug by the looks of it.