Placed an order in June 2017 for VM Broadband as had seen notices around the block for VM available.

Had site survey done (no kidding) about 6 times from various engineers. Each time telling me the block is not pre-wired despite the other 5 in the complex already being pre wired. Somehow this block was missed.

Had other engineers come during the 6-8 week period advising they will contact construction as they can lay cables and even took pictures and assured me it was being raised to the relevant department to start laying cables here.

After about 2-3 months of **bleep** all, I called VM and complained and they advised me construction had said this block was missed by accident (no **bleep**, we established that near the time I placed the order) and she recommended I cancel and just go with SKY as they cant tell me if and when it will be resolved.

Had a further call after cancellation from pre install telling me they were working on the case and would update me in a few days but no updates since.......which was 3 months ago.

Have placed a fresh 2 new orders as I own another property in the same block and just want the bloody internet here!!!!! VM, your customer service is pretty **bleep** poor at the moment and your departments really do not talk to each other.

Fast forward 3 years, still no VM line installed and no one has contacted me. Ive had to suck it up with crappy BT for now and there are 3 other people in my block who want virgin services more than anything too!!!

Thanks for posting and welcome to the community.

My apologies for this and also the delayed reply. What happens when you put your address details into here 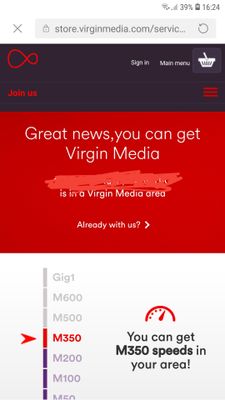 Clearly my address isnt the issue and shows up as serviceable hence the screenshot...

Also I've spoken to your sales team after placing 3 orders with nothing being done for almost 3 years so pointless repeating the same thing when several spotters or engineers have been on site and said theres no reason it cant be done?!

Thanks for coming back to me,