Long story short, but experienced significant issues from VM, and their 'customer service'. Took complaint to CISAS after 8 weeks, and CISAS accepted the claim for adjudication. Via the CISAS portal, VM offered £300 as their settlement, which i accepted (i was claiming for a larger amount, but felt that this would bring an end to the misery).

Just wondering how and when i would receive this settlement; i am no longer a VM customer, so they *shouldnt* have my DD details (this was cancelled back in April and not set back up)

Thanks for your post w_scorah and a very warm welcome to you!

OK, so the mandatory 20 working days passed on 29th September, and (surprise surprise) no contact at all from VM to me, to discuss the payment of compensation to me.

I initially contacted VM to discuss this - hopwing that it could be resolved quickly and it was purely an oversight. I was advised i had already been given a credit of £125.xx (which actually was a repayment of services that i was previously billed for, but since leaving would not actually be liable for...). The agent had no idea about CISAS or CEDR, and spoke to his manager, and i was given the obligatory "my manager is on another call right now, but they will definitely call you back" line - which we all know is code for "I cant be bothered to deal with you anymore". I subsequently called CEDR to reopen the case and was informed VM would be told to comply within 7 days.

Well, guess what... still no contact from VM or sign of payment. Therefore, the case has been reopened by CISAS. 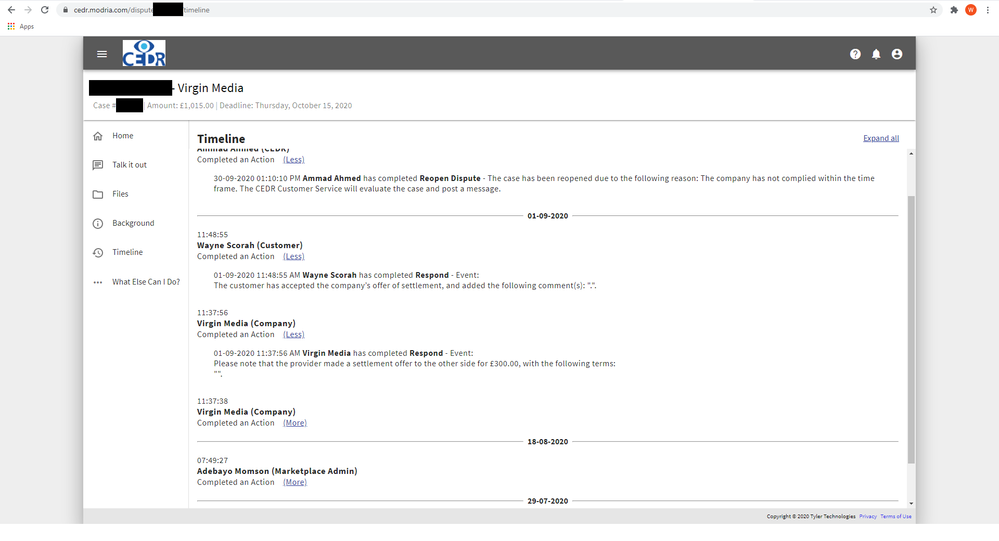 Now, rather than the previous smarmy retort ("Speak to CISAS"), is there anyone at VM who has any idea of actually providing a reasonable level of Customer Service, that can not only take some ownership, but actually arrange for payment of the compensation that YOU offered in the first place.

Sorry for the delays in getting this resolved for you. I can see that you have spoken to a member of our team earlier today, who is looking into this and will get back to you once she has all the information that she needs to complete your requested.

Please bear with us and we will get back to you very soon.

Congratulations on your successful CISAS claim (albeit with VM apparently doing their best to throw a spanner in the works right to the end).  Some of the VM apologists here will argue that a ‘settlement’ after a CISAS complaint is not the same as the complaint being upheld.  The only difference seems to be VM jumping (settling) before they are pushed (the complaint being upheld).  81% of complaints to CISAS against VM result in a successful outcome for the complainant, so I would encourage anyone with an unresolved issue with VM to take the CISAS route.  I’m not sure VM haven’t delegated their complaints process to CISAS anyway, which saves VM having to maintain their own effective complaints department.