I went on Virgin Media web chat to try and sort this out and was asked to confirm my address so packaging could be sent out. Once again I had threatening texts and emails but no packaging.

I discussed sending back the kit without the official packaging and was given the return address and told to take the kit to the local collection agent (our newsagent). I carefully packaged up all the equipment and added an address label (I am so keen to get all this stuff out of my house). The shop would not accept the parcel without a bar code.

Worried by yet another threatening text and email I tried web chat again. Over the course of a day I wasted a whole hour while an agent asked me a question and then did not respond to my answers for between 10 and 23 minutes so tried again later. At my second attempt I was online for 3 hours and dealt with 3 different agents.

I have been promised that packaging will be sent out in the next few days but I sincerely doubt that it will arrive as all the other packaging has failed to turn up,

Does anyone have any suggestions on how I can get VM to collect their property or who to send a bill to pay for the storage of their property at my premises?

Thanks for posting and welcome to the community. My apologies for what's happened here. Firstly regarding the SMS received. Please ignore these.

I can see we've sent returns packaging out yesterday from checking the system. Have you moved address or at the same address as on the old account?

I have not changed address and although the notes say the packaging has been sent out I have no faith it will arrive as this is the fifth time that packaging has allegedly been sent out. Your bills always arrived at my address with no issues.

Yesterday I was told by one of your agents that I would get compensation of £35.96 for my troubles. On reflection this is the exact amount that Virgin owes me from a previous overpayment and is therefore NOT compensation.

I have also been assured that the messages will stop but they have not. Ignoring the messages will mean that I do get my money back. This is causing me a lot of stress as I don't want to spend an hour every week on online chat.

I did ask one agent for a return address for when the packaging failed to arrive yet again and was assured that the click and collect agent would have all the details to return my package. I took my parcel in yesterday but was turned away as it had no barcode. Could you arrange a courier to collect my unwanted kit?

This isn't an official method, but you can have a returns lable sent to you via email and print it out.

Go to this page https://www.collectplus.co.uk/virgin  Scroll down and click on create new label.

Then enter your email address, and click on email me my new label and follow the instructions

Take your package to your local Collect Plus point store-locator

The shopkeeper will scan your parcel and give you a receipt with a unique reference code - keep this handy as proof - and don't forget to include a covering letter with your equipment with your name and account number.

We're not able to arrange a courier to do this however I will flag it to the equipment returns team to ensure you do get it. We're not aware of any issues with receiving the returns packaging.

If you do not receive it within 14 days please let me know.

That's great - I have been asking for this option for weeks but have been fobbed with promises that the packaging would arrive. I'll certainly try this.

I've messaged them now to make them aware of it.

Thanks for the tip to print off a returns label. However I tried creating a new label but it had no bar code. My local Collect Plus store told me that the label neds a bar code before they can accept a parcel. I suppose I will have to wait for the next round of non-delivery/on-line chat complaint/promised delivery of packaging .....

That's odd as another poster says you did send a courier to them. The redundant kit is Virgin property and surely the responsibility is on Virgin to arrange collection and not to expect former customers to do their work for them. I have also seen posts going back to last where there was an issue with non receipt of packaging and customers being charged for no return.

I will wait for the packaging (although why it will arrive when the four previous packs did not I do not know).

That's odd, I've just tested it and ordered a returns label. Opened the email and clicked on the PDF - picture of label with barcode below. 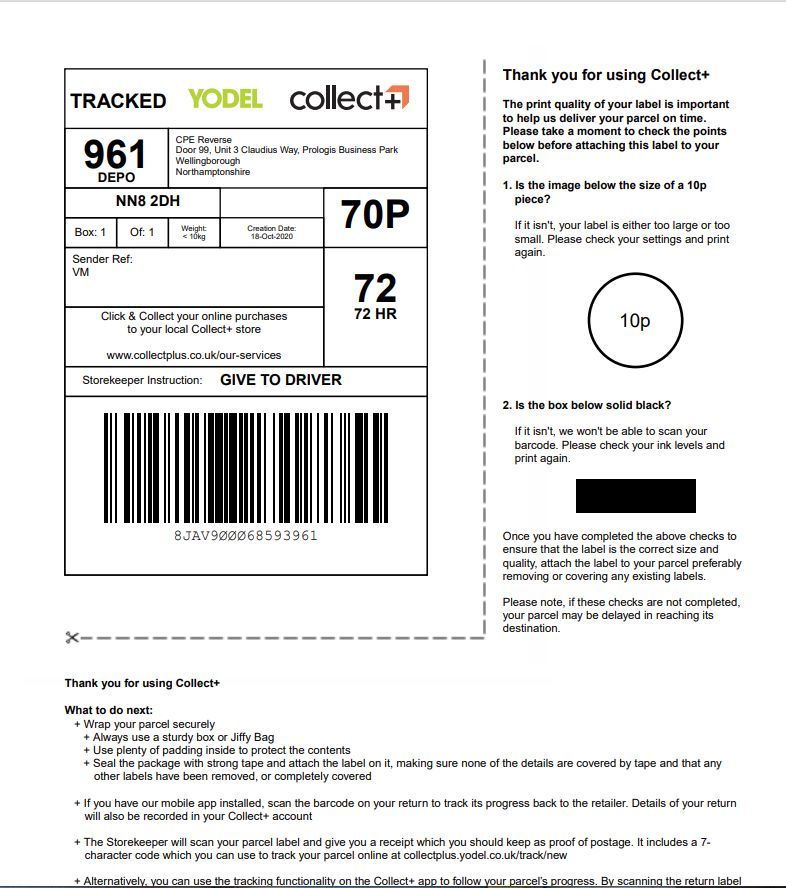