Thanks fore replying back Lizzie79

I cannot call as we are online only here

I'm nor promising anything can be done, but I would like to try at least

I can look into this. I just need to pass security first

I would much prefer to talk to some one rather than continuously message and I don’t think I am being heard correctly. I don’t want to verify my account security through messages.

Thank you. I am awaiting 2 calls from 2 different people that should have called yesterday and they didn’t so I won’t hold my breath.

I have to say whilst it’s great that you got in touch it has added another layer of frustration as you are only able to offer limited on line support.

I am seemingly unable to cancel the installation and close my account!

I asked Sofia to do it, she said she can't because it's with the (ineffectual) installation team. She said I had to call  ... again!

I called, went through security, was asked my mobile number, I asked why, she said so she could call me back if we get cut off, I laughed and said nobody from Virgin Media had ever called me back even when they had promised to do so, she got all hoity-toity and said I'd never spoken with her, I told her I wanted to cancel and explained that I'd been waiting 6+ months for installation, raised multiple complaints, nothing ever gets resolved, she said she can't cancel because it's with the installation team, that she'd have to transfer me to the relevant department, she put me on-hold, less than a minute later I was cut off, nobody called me back!

I raised a complaint in which I said VM's whole service (installation, customer service, complaints handling, etc) was useless and ineffectual, and very clearly stated that I want to cancel, gave my (not Virgin Media) mobile number. The complaint, C-1204211391, has my mobile number. Yesterday I received another of their dishonest "we tried to contact you" emails even though I had received/missed no calls! Yet again they apologised for the abysmal service BUT they made no mention of my request to cancel. There is no way to respond to the complaint unless I yet again call and get bounced around and then probably cut off. The complaints system is absolutely useless.

I just raised another complaint, C-1304211055, regarding this and again requested cancellation. The complaint has already been closed!

Without doubt the worst company I've ever had to deal with. I dread to think how many hours/days I've wasted on this.

I've attached a screenshot of the two complaints raised yesterday and today, I've edited out my contact details. 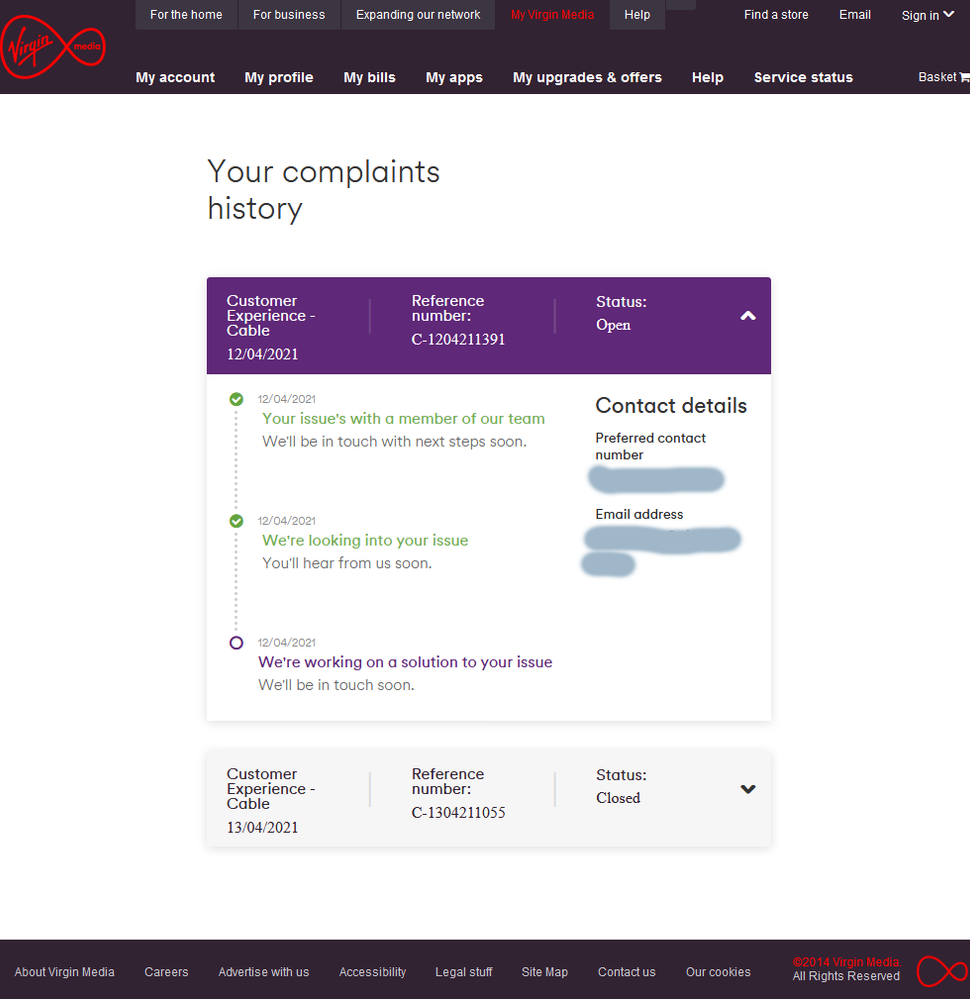 I can see that you are in a Private Message chat with @Sofia_B; she'll do all she can to assist you via private message.

There should be no reason this cannot be chased for you and ensured it's with the correct team  to assist you if she cannot do it directly.

I have been in private conversation with Sofia, she told me that she had raised requests with the relevant people, but nothing has come of it. I told her that if nothing was resolved by last Friday, 9th April, that I would cancel. Yesterday I asked Sofia to close/cancel my account, she said she can't because it's with the installations team, that I would have to call to cancel. Why can't this be done online through the account page?

Nobody from Virgin Media will help me.

The complaints department seemingly automatically close any complaint regarding their useless service.

I submitted a complaint, one of many, yet again you didn't call me but sent an email stating "We were unable to contact you" which is a lie, you have my preferred contact number, ????????, on the complaint, C-1204211391, I missed no calls, so you didn't try to contact me, you lied, this is not the first time, and I'm not the only person to experience this. Your complaints system is awful, your complaints handling is awful, your customer service is awful, your installation team are useless. As per my previous complaint, C-1204211391, I am sick and tired of waiting and your **bleep** excuses and your NEVER calling back as promised. I want to CANCEL. I do not want your service, given the (complete lack of) service I've experienced over the last 6+ months just waiting for you to install, I dread to think how awful it would be if I actually had a problem after you'd installed. I called yesterday to cancel, I was transferred and then cut off, nobody called me back even though they took my mobile number just so they could call me back! I want to cancel and I want you to confirm that you have cancelled. Please confirm.

I want to cancel the installation and close my account and I want confirmation that this has been done. I shall be seeking compensation for the time wasted waiting in for you on the installation day and the numerous hours since calling and writing to you PLUS the additional cost I incurred with my current provider because I didn't want to commit to a new 18-24 month package (for my broadband, phone and mobile) because I was meant to switch to you in October 2020. Do NOT send me another of your dishonest "we tried to call you" emails, just cancel and confirm that it has been done.

I can see that the Private Message session is still open @the2nicks so please do await her next reply.